The degree to which Distributed Sprint Points sensibly pick out skiers who had large drop offs or improvements between the ’08-’09 and ’09-’10 seasons appears to be mixed.  But for the sake of symmetry, let’s look at the unhappy end of these trends.

The table below shows the male skiers with the biggest drop offs between the two most reason seasons:

The “winner” here is Czech sprinter Ales Razym.  He seemed to be improving steadily, and then something truly catastrophic happened last season.  I don’t know the slightest thing about him, except that he’s young (~23) and Google isn’t telling me much more.  I have a hard time believing that such a dramatic turnaround can’t be somehow linked to illness or injury.  Whatever happened, I hope Razym turns things around next year and gets back to his pre-’09-’10 self.

Norwegian sprinter Boerre Naess only qualified once last season, compared to three times the season before, and his non-qualifying races seemed a bit slower.  But he’s been a fairly consistent sprinter over the years, so this seems a bit unusual.  Injury or illness could be a factor here too.

A few of the other skiers on this list are near the lower limit of the number of races per season to be considered, so only a few races can have a fairly large effect.  Alex Harvey and Tom Reichelt are the primary examples of this.

Finn Sami Jauhojaervi seems like a borderline inclusion here.  Strictly speaking, he had an off season last year, but looking at all of his sprint results together (see below) his ’09-’10 season doesn’t seem dramatically out of line.  Josef Wenzl is another example of someone who posted an off year, but one that seems within the “normal” range for his entire career.

Torin Koos is a potentially controversial inclusion, given his recent exclusion from the USST and the commentary that decision prompted.  I think its undeniable that ’09-’10 wasn’t his best season, as he clearly struggled to qualify.  But I think his inclusion here is pretty borderline, and given that I’m experimenting with an entirely different method for calculating sprint points here, I wouldn’t read too much into this. 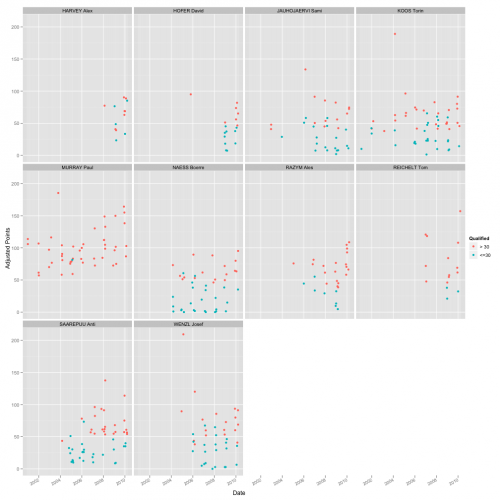 A link from the Swiss Miss!

What Does It Take To Win A Medal?