This is the sprinting version of my earlier post looking at some of the best young distance skiers on the World Cup circuit last season.  The methodology here is basically the same.  I’ve set an age cutoff of 24, I’m only considering skiers who did at least four major international (i.e. WC, OWG, TDS) sprint races last season and only those sprint races are included (so no sprint races from OPA Cups, Scandinavian Cups, etc.).

The major difference between this and the post looking at distance skiers is that using FIS points isn’t so useful anymore.  Since we’re looking just at major competitions, I think just the rank (1st, 2nd, etc.) in each race should be sufficient to a good picture.

The graphs are below the fold… 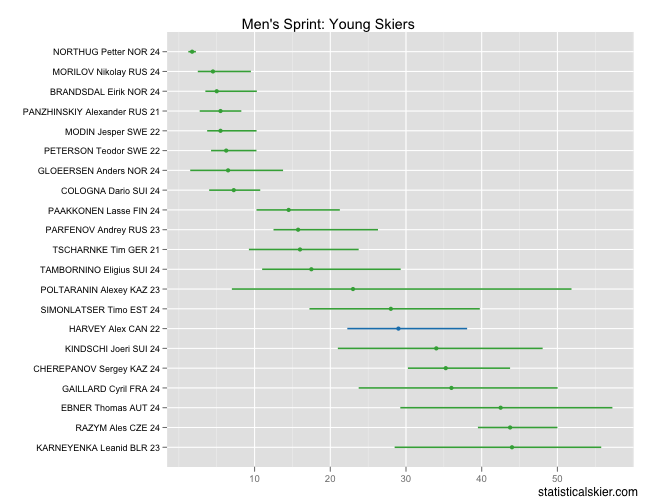 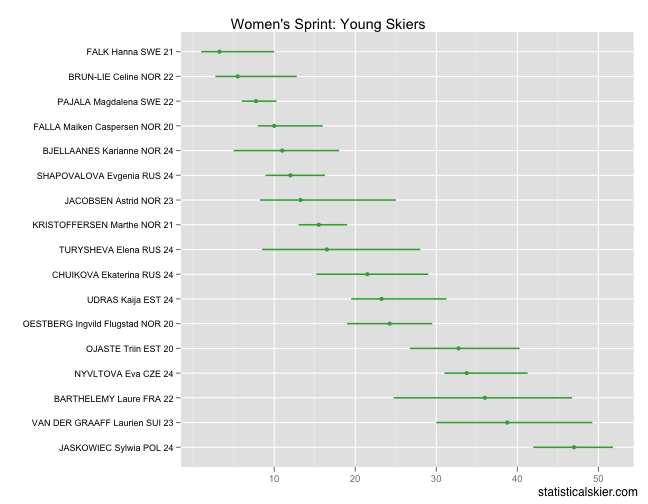 As I mentioned, the x axis here is rank, so for instance, Hanna Falk’s average finish from her four best sprint races (on the WC) last season was around 4th.  The error bars are calculated using the same methodology as before, which is outlined here.  Since I modified the same script, the North Americans will appear highlighted in red (US) or blue (CAN).

Petter Northug appears again as a “young” skier, which he is, of course, but we might be more interested in the lesser well-known skiers. Alexander Panzhinskiy and Tim Tscharnke are two of the youngest men on this list.  Panzhinskiy, of course, managed a silver medal in Vancouver this year, but he had a stellar season in general, with five other top ten finishes in sprint races.  Glancing at his results, it seems like he might be a bit of a classic specialist.

From a statistical point of view, I’m intrigued by the “gap” that seems to appear between the top eight men and the rest.  I’m not sure I’d read much into that, but it’s curious, at least.

Hanna Falk leads the way on the women’s side, thanks to a couple of victories early in the season.  She didn’t have a great sprint race at the Olympics, unfortunately, finishing 29th.  Maybe she’ll have better luck this year in Oslo…

I’d also note that there are more younger women here than on the men’s side, which mirrors what I’ve seen in the data in general.  Namely, that you’re more likely to see fast female 20-22 year olds on the World Cup and men of the same age.