I was listening to FasterSkier’s podcast the other day and was a bit startled to here one of the participants mention me by name!<1

The topic was whether we tend to see the same few skiers at the top in women’s sprint races more than in men’s races.  In other words, are we more likely to see “random” skiers make the A-final or even the top three in a men’s sprint race?  I actually posted something related to this a while back that was more geared towards the question of competitiveness.  I did some fancy math and concocted something to measure this idea that I called “churn”.  Basically it measures the degree to which we see the same group of people in the top 3, or top 5 or whichever group we’d like to look at.  But the graph in that post isn’t very useful for comparing men and women directly.

Let’s start really simple.  For sprinting, I’d say we’re most interested in the top 3 (podium) and the top 6 (the A-final).  Last season we saw 15 different women on the podium versus 19 for the men.  There were 32 different women women reached the A-final (top 6) at least once, versus 34 for the men.  On a basic level, this supports the notion that there’s more “churn” in men’s sprinting, while we’re more likely to see the same women in the top 3 or 6 in sprint races.

But the differences are pretty small, of course.  So keep in mind that often we’re talking about an extra 3-4 skiers rotating into the podium spots or the A-final.

I’m not going to rehash my derivation of how I defined churn.  You can go reread the above link if you’d like.  Let’s just say that the result is a number between 0 and 1.  A churn of 0 would mean that the exact same set of skiers is on the podium (in a possibly different oder) every single race.  A churn of 1 would mean that every race we get a totally new set of skiers on the podium.  Here’s two bar charts comparing men and women for several seasons: 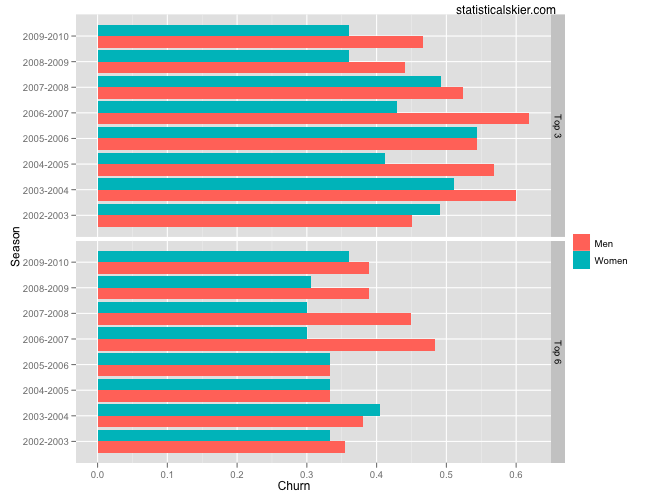 Generally speaking, the men experience more “churn”, both on the podium and in the top six.  But again, keep in mind that these differences are often being driven by the addition of as few as 3-5 skiers reaching the podium or top six.  On the one hand, that’s not a lot of skiers in an absolute sense.  On the other hand, compared to the number of skiers we’re talking about (1-2 dozen usually) that’s a fairly significant percentage of the total.  Whether that’s a meaningful difference of not, I’ll leave up to you.