I was reading FasterSkier’s profile of the Japanese World Cup skiers and a few people commented about how Japan had a good showing at World Juniors/U23s this past season.  Naturally that got me thinking about how little I know about these guys, so I thought I’d make some graphs.

First up is a simple time series of Japan’s results at WJC/U23s over the years: 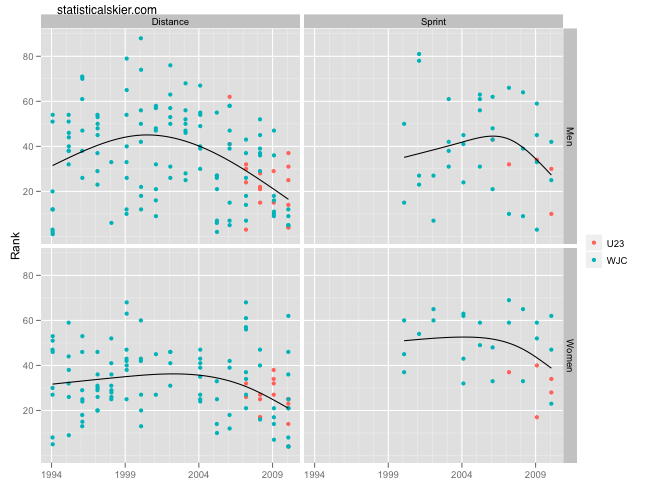 I could have gone with FIS points on the y axis, but decided to stick with plain old rank, for clarity and to easily plot distance and sprinting results together.

Clearly, Japan’s juniors have been improving on average, lately.  However, I’d hesitate to call their most recent results uniformly better than how they’ve done at these events in the past.  For instance, the Japanese men had some strong distance results at WJCs in 2005, 2006 and 2007 and have been consistently putting people in the top twenty for the last 6 seasons or so.

On the women’s side, I wonder how much participation rates (or funding) have changed in Japan recently, given the small numbers they sent to these events from 2001-2003 (at least on the distance events).

For a different look, let’s put some of this in context by comparing Japan to the other nations.  I took each of the WJC/U23 races from last year and simply scored them using World Cup points (100 for 1st, 80 for 2nd, down to 1 for 30th).  The results are in the following bar plot: 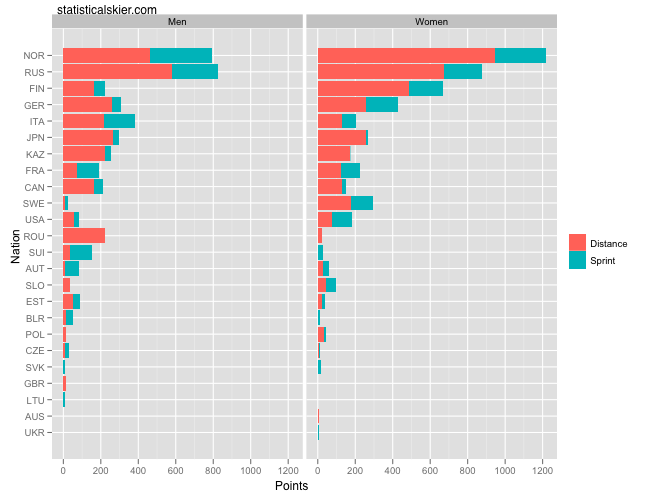 The length of each bar segment is just the total number of “World Cup” points earned by that nation across all athletes and events at WJC/U23s last season.  I ordered the nations by the total number of points (men and women).  Remember that there are more distance races than sprint races, so the red bars will be larger, generally speaking.

On the men’s side, it’s pretty clearly Norway, Russia and then everyone else.  But the Japanese men did indeed have a strong showing, comparable to the likes of Germany, Italy and Finland.  The Swedish junior men appeared to have a rough one last season, which is interesting.

The women show a somewhat smoother progression from Norway to Russian, Finland and Germany.  But again, Japan is right there in the next tier of nations with Sweden and Italy.

All Aboard the Kowalczyk Train