Marit Bjørgen commented somewhere that her win at the WC opener in Gällivare, SWE was “the best skate race of her life”.  Sadly, I can’t find where I read that, otherwise I’d have a link for you.  Obviously, I found that kind of intriguing.  Let’s look at Bjørgen’s race in a bit more detail: 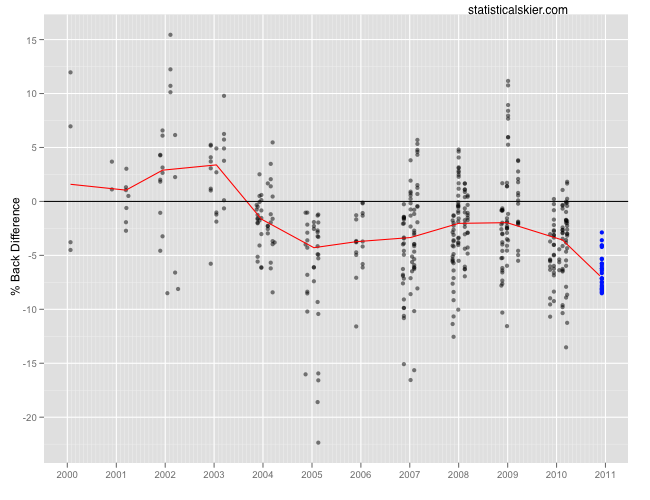 This is the difference in percent back between Bjørgen and the top thirty women at Gällivare in all skate races where they’ve competed against each other.  (Since there’s quite a bit of data on Bjørgen I was able to be a bit more picky and only include skiers she’s raced against at least 5 times.)  The red line indicates the median percent back difference for each season.

This isn’t a direct comparison to specific races, of course, so this doesn’t tell us directly whether this particular race (in the blue) is better than any of her past skating efforts, but it provides some useful context.  The most obvious thing to note is that the seasons with the most similar looking performances are from 2004-05 and 2005-06, where Bjørgen appears to have never lost a major freestyle race against these particular skiers (all the dots are below zero).  Additionally, the median percent back difference from Gällivare is quite a bit below the median from any other season.

A little editorial comment here.  Statisticians tend to react to extreme events differently than other people.  The typical response is to assume that this sort of thing is going to keep happening, whereas statisticians will tend to assume it was a rare event, unlikely to happen again.  In this case when Bjørgen opens the season by absolutely crushing the field, there’s a natural tendency to begin to expect Bjørgen to destroy the field like this all season long (or at least to seriously suspect this is going to happen).  My reaction was more along the lines of “There’s no way she can sustain that level of dominance for any length of time.”

Now, Bjørgen may well continue to win races, perhaps most of them.  But I doubt we’re going to see her rack up margins of victory above 2.5% on a regular basis.  Unless, of course, she does, in which case I’ll eat my words.

But how about a more direct, simple comparison?   How did that victory compare to Marit’s other WC/OWG/WSC wins?

So yeah, not only could you make a case that that was her best skate race, you might argue it was her best race ever, simply measuring it by margin of victory.  Notice how many of her biggest wins came in November, though?  Like, nearly all of them?  Maybe Bjørgen is just less interested in this whole “peaking” thing I keep hearing about.

This got me wondering what the biggest margin of victories were ever in WC/OWG/WSC races (or at least since 1992, where I have data):

Largest margins of victory since 1992.

Astute readers will realize that we can’t really count Neumannova’s win in 2007, since those China WC’s were not exactly the same as a typical WC race.  I am unsurprised to see Bente Skari Martinsen near the top of this list (and on it multiple times).  And of course, there are the odd “unusual” races, like Magnificat’s win at the WC final, where race tactics for the overall standings was probably playing a role.

Catching Up with Quick Canadians: An Interview with Chandra Crawford and Dasha Gaiazova