FasterSkierNovember 16, 2010
On Monday morning we woke up to a day of easy travel to Gallivare, Sweden, the first World Cup stop of the season. After a leisurely breakfast of the usual spread of oatmeal, breads, jams, fruits, pickles, cheeses, mini Finnish pancakes, yogurt, muesli and coffee, tea and juice, we climbed in the van and pulled out of Muonio. Immediately, we left the main roads, crossed the boarder into sweden and found ourselves on two lane, icy roads, with endless kilometers of snow-plastered pine trees, lakes and reindeer. It was about 250 kilometers to Gallivare, and with about 100 to go we started to worry about the amount of gas we had in the tank, as the gas light had been on for about 20k and every town we came to consisted of merely a blue sign with the town name and a house or two, but definitely no petrol station. So, with about 80k’s to go, we decided it was not looking too good for us and we better ask for some help. So we pulled into a driveway and an older, weathered man walked out of the house, wearing a light fleece jacket and no gloves. He turned out to be a reindeer farmer who was receiving a shipment of 200 reindeer in the next 20 minutes, but as he had no diesel, he called all of his friends and one of them who lived a couple of kilometers away had some diesel we could buy. So we waited with him while his reindeer were delivered, which was quite a process and then went and got ourselves 5 liters of diesel from his friend down the road. 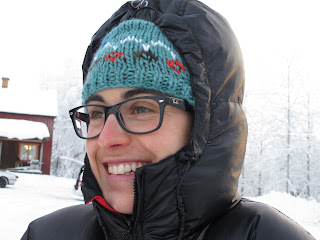 Mo at the Reindeer farmer’s house, caught in the moment of adventure. 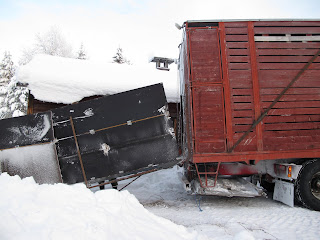 If you order 200 Reindeer for your farm, this is how they come, in a double stacker semi. 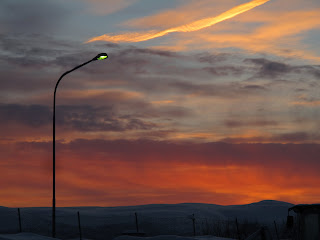 Sunset in Gallivare when we arrived at 2 pm.
While we had run our van was out of gas, the second van, carrying all of the gear and 3 people, began leaking oil and broke down at a gas station. Some locals, who turned out to be reindeer herders (it may be becoming clear what people do around this part of the world for professions), took Jocke, Kris and Fish to their house where they made them coffee and attached a homemade trailer to the back of their Golf. Then they loaded Jocke’s stuff in it (he was headed to the airport so he had all his stuff with him) and everyone piled into the small car. Picture it, the reindeer herder, his wife, Jocke, the Bird and the Fish all squeezed into a Volkwagen Golf. Pretty funny.
We all arrived in Gallivare safe and sound, thanks to the kindness of humans. This morning’s ski was awesome and in a couple hours a few of us will head out for an afternoon night ski. Others will run, others will lift weights and others will rest. Everyone is fired up, last year’s Supertour winner, Chirs Cook, shows up this afternoon and we will be fielding 2 relay teams on Sunday. It’s an amazing way to start the season, having a big traveling team, and knowing there are about 15 other American’s racing in Roveniemi this weekend as well.
Here are a few more pictures from this weekend’s events. 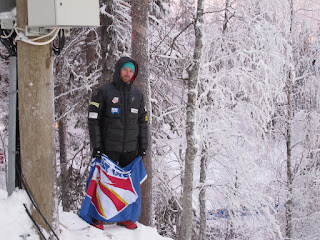 Newell at the Alpine World Cup in Levi carrying the flag. After the races on Sunday a few of us jumped in the van and headed over to Levi, a town about 45 minutes away to catch the second run of the men’s World Cup slalom. We had 6 guys racing and two qualified for the second run, Ted Ligety and Will Brandenburg. Ted skied to an 18th place finish and unfortunately Will, who had skied up from bib 35 in the first run to 8th, straddled and skied out. It was really fun to be in Finland watching our alpine guys do their thing. 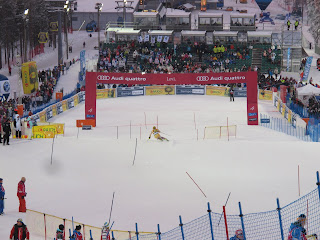