Last week was a week to remember for more then one reason! By the end of the week I had more “first times” then I think I ever have experienced in one week!
First Times-
1. Traveling to Senior Nationals with the APU Group– This pretty much sets the mood for all my first times, and is the most important key! This group of skiers and coaches are incredible. The way that everyone works together, and pushes each other throughout the week is hard to put your finger on and even describe. I think the chemistry among the group is the unique part to allows this to happen. There is not a single person on this team that is bringing down the energy. Every person gets out there race day and throws down- whether that means racing, or cheering for their teammates. One of the most rewarding things about this, is when you have the opportunity to stand on the top of the podium on any given day- you have 30 other people standing there with you, giving you the high five. The next day your teammate will be standing in that same place, experiencing the same feeling. It makes all the hours you put in training alongside all these people worth it! 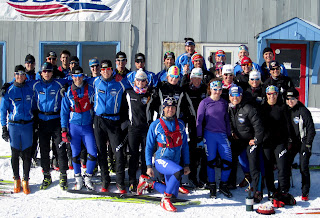 2. New Years Celebration– for the past 6 years, I have been traveling to Senior Nationals right before New Years, so I have never once had the opportunity to celebrate. Normally my night consists of sitting and watching “America’s Next Top Model” on Tv- or reading my text books. This year, the girls house decided to throw a dress up New Years Party. We got all dressed up and sent out invitations. It turned out being tons of fun, even if we didn’t stay up until the “New Year”, but it was still the most excitement I have had on New Years in my life! 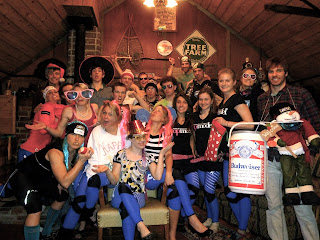 3. Arriving at a Venue with No Snow– well maybe we can call it a couple inches… lets just say I was disappointed to not bring rock skis! Regardless, it was incredible what race organizers pulled together for every race! It added some fun to the mix of racing, and in no way affected any of the racers opportunity for success! Thanks to the Black Mountain Crew! 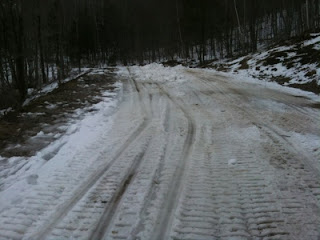 top of the course day before the race
4. My first Podium- In my first Senior Nationals race of the year, the classic sprint, I finished 3rd American- allowing me to stand on the podium at National Champs… I couldn’t have been happier, let alone, my roommate, and teammate, Morgan Smyth was standing in second, and the great H. Brooks stood on top! Katie Ronsse also took fourth, so APU swept top four Americans! 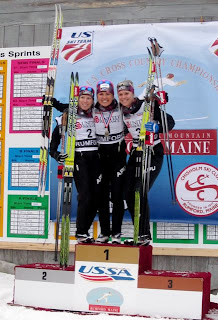 5. Sweeping the Podium as a Team– I already said this, but it is a true first! Standing on the starting line of the A-Finals, with three of my teammates was a unique feeling. I knew that 300 days of the year, I train endless hours with these same girls, and it was all worth it!! Thanks to the coaches and tech’s for making this possible!! 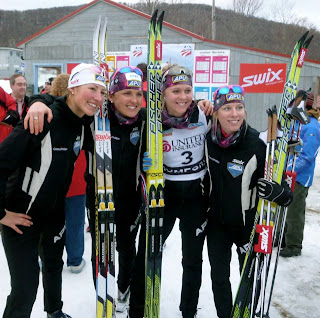 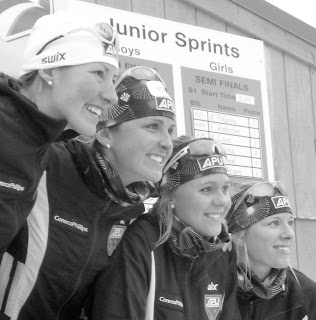 6. First National Championship Title- Honestly, this still hasn’t quite sunk in- but it was one of my favorite firsts! With the 10k Classic consisting of four laps of a 2.7k course- I went into the race with a plan. A plan to race it like I would a mile on the track. First lap for rhythm, second lap pick it up, third lap push the pace, and fourth lap race from the heart. My plan kinda fell a bit to pieces when I took out the first lap at a faster pace than I expected with all the excitement. So I would say more of a pattern made of push the pace on the first lap, push the pace harder on the second lap, and race from the heart for the following two laps. Going into this week I would have never guessed I could win a distance race, I had my money more on the sprints- but this was the best part!! Once again, one of my teammates accompanied me on the podium, congrats to Morgan for second!! Wahooo 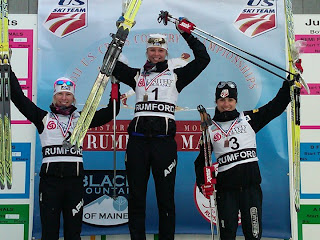 7. First Time I Have Seen Such an Incredible Performance- Saturday’s race was amazing for a bazillion reasons. First, I raced my heart out every heat of the skate sprint and after cresting the last hill in first during the A-Finals, I was passed by two girls right before the end. This is one of the things I need to work on, race tactics! Even though it is most comforting to lead a race, and control your competitors, tactically it is stupid. The same thing happened in the classic sprint. Drafting is way better in second or third coming down the last hill than in first! Third times a charm with this lesson though, next year I will come prepared to race it smarter. But beside that point, one of the girls I have been racing with for years, Jessie Diggins, had one of the most unbelievable performances. For one, she is not a sprinter, and she won the race. And for two, she fell on the top of the hill and somehow still managed to win the race! Congrats to Jessie!!

Homestretch w/ Jessie on the left coming in hot!- Stephan Mitman Photography
8. First Time Making the Alaska Daily News- Not only did we make the daily news, but APU skiers made the front page every single day of races! Thats fun!!! 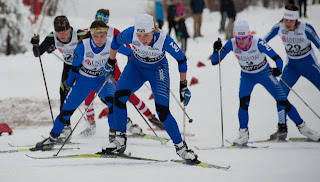 Stephan Mitman Photography
After all these firsts, I came away from the week feeling very happy with everything. Not only had I made my first podium, but I podiumed in every race. Thats a huge jump for me, and I couldn’t be happier! Buttt, the year is early, and I have lots more ahead of me to set my eyes on! On sunday I take of for U23 Championships in Estonia, where I hope to do just as well if not better. The races are a Classic Sprint, Skate Distance, and Pursuit Distance. This years US team is going to be amazing. I think it is stronger than ever! 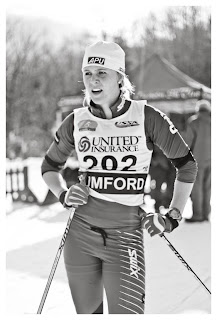 Kris Dobie Photography getting artistic
Thanks to the coaches and wax tech’s for doing an amazing job last week! It is unbelievable to see how hard these guys work! 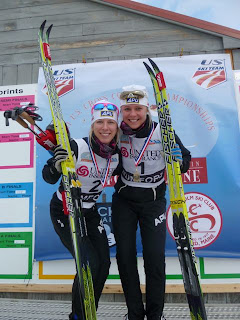 I am now in Lake Placid, New York hanging out for a couple more days until heading to Estonia. FUN, FUN!