I’ve mentioned this from time to time in other posts, but one thing I’ve noticed from the sprint heat times that Jan at WorldOfXC.com has been providing me is that the women’s heats are more likely to increase in speed as the day progresses. I’ve said it enough that I should probably provide some evidence: 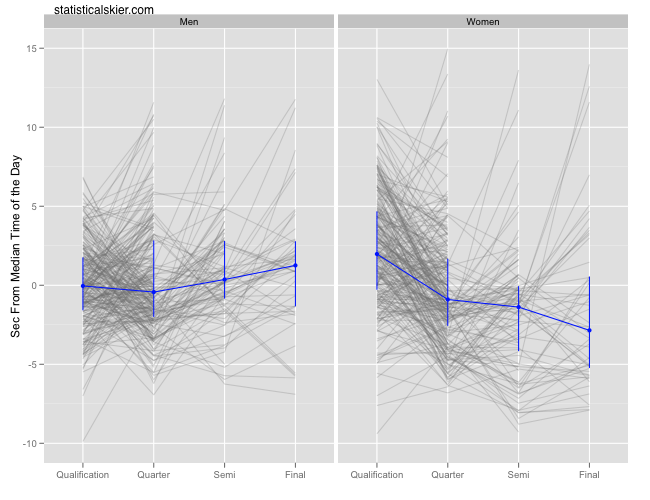 In blue I’ve shown the median value (and error bars representing the interquartile range, or middle 50%) for each heat. As you can see, the men’s heats tend to remain roughly flat, or slightly slower as the day wears on. The women, on the other hand, see more of a trend toward faster times as we progress through the quarters, semis and finals.

There could be fitness or physiological reasons for this, or it might be related to how competitive each gender’s qualification round happens to be. For instance, it may be that qualifying in the women’s sprints is enough easier (by this I mean that there is a tendency for the men’s field to be somewhat deeper) which allows many of the women to back off somewhat in qualification.

But another possibility I’d like to suggest is that as the men move into the semis and finals, they are less willing to hammer right out of the gate in an attempt to break their competitors. Instead, they’ll tend to play more of a waiting game.