Now it’s time to take a look at some of the bigger nations track records at World Junior Championships and U23s. The graphs will be very similar to the ones I used in my post looking at the USA and Canada. I’m only going to look at results for Norway, Sweden, Finland, Russia and Germany. (Sorry, Italy! Maybe next time.) Obviously, these graphs will be a tad larger than before, so you’ll have to click on them for the full versions.

Beginning with distance results at WJCs: 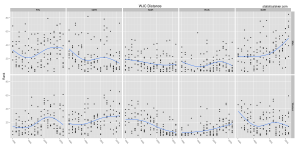 There’s a lot of variation, of course, around these trend lines, but a few things jump out. The Swedish men, Russian women and perhaps the German women haven’t fared quite as well lately. The Norwegian women, on the other hand, have been on quite the teat over the last 4-5 years. The Finnish women really fell off in 2004 but have been slowly returning to form, thanks in large part I’m sure to the work of Krista Lahteenmahki.

Most of the other trends (up or down) are less pronounced. The Finnish men may have slid backwards slightly in recent years before having a much improved collection of results last year.

Moving on to sprinting at WJCs, we have quite a bit less data: 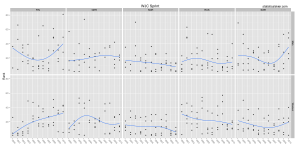 With the obvious recent exception, the Finnish women haven’t quite found their sprinting form, and the Finnish men seem to have tailed off a bit as well in that department. The Swedish men again look like they are trending in the wrong direction, but in this case that’s really only the result of 1-2 years of less than stellar results, so I wouldn’t necessarily read much into that.

Finally, here are the equivalent plots for results from U23s. There’s even less data here, and several nations don’t always send athletes, so I’ll just leave it at that. 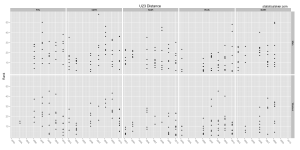 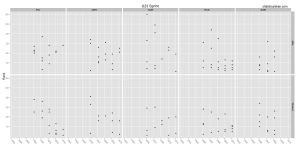