A number of Americans and Canadians participated in some big FIS races in Beitostølen, Norway this past weekend. Not all the results have migrated over to the FIS site yet, so I’m just going to focus on the classic distance races from Saturday. We should keep in mind throughout that, from what I’ve read, many of the North Americans were not necessarily trying to put together top performances, but rather tuning up before Drammen next weekend.

One interesting tidbit I should note is that the combined men’s results from Saturday represent the single biggest ski race currently in my database, with well over 400 participants. 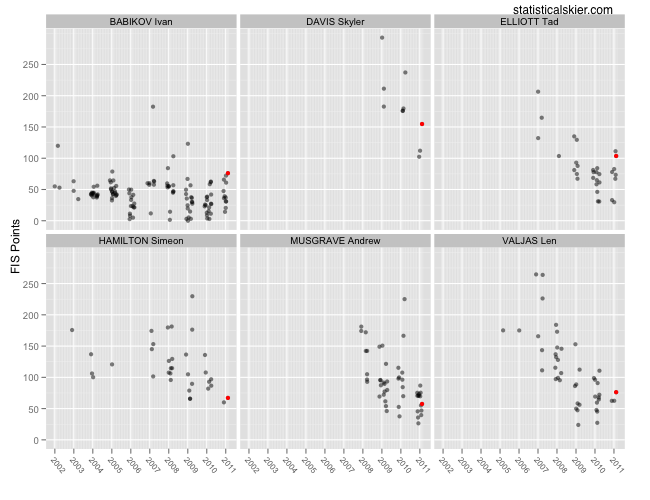 I’m including Andrew Musgrave, since he’s an interesting skier from a “non-standard” skiing nation. As always, the meaning of FIS points can be tough to tease out, since it requires that we believe that the penalty system is accurately measuring the strength of the field. But generally it will capture a general sense of “good race” or “bad race”.

By that measure, it certainly seems like Babikov and Elliott didn’t have a great day, although they’re more known for skating. Simi Hamilton put together another strong (for him) distance race for a guy more known for sprinting. There’s just too little data for me to say much about Skyler Davis and it appears that Musgrave and Valjas both had decent but not spectacular races.

Let’s take a closer look at a few of these guys, using percent back difference plots. These plots look at head-to-head matchups against all the people in this race that a skier has ever skied against: 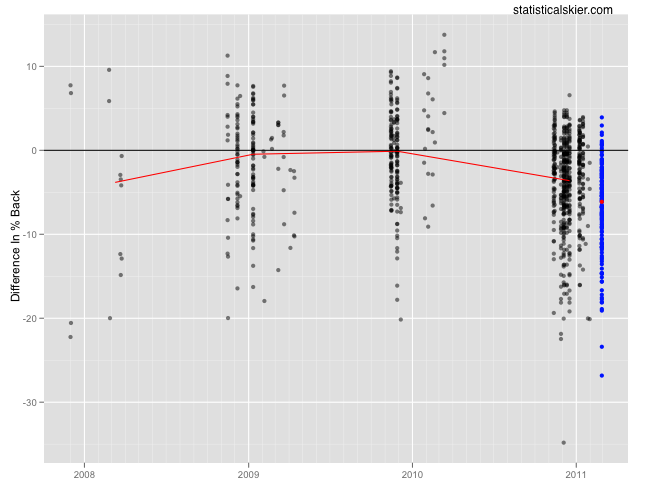 There were a lot of people in this race and he’s raced in Norway a fair bit, so there are a lot of points for Musgrave. This makes his race look a bit better, perhaps. The red line tracks the median by season and Saturday’s race is is blue, with a red dot marking the median for just that race. This suggests that this was a somewhat stronger performance for him against these particular skiers. 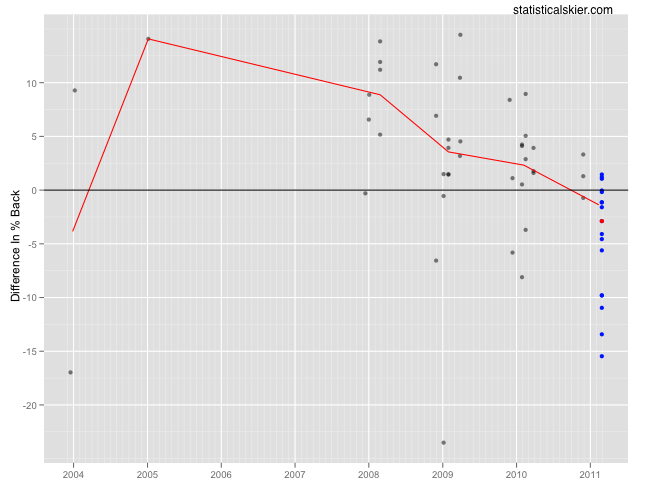 Like I said, not a lot of previous matchups in Simi’s case, but what we see suggests a strong race, to be sure. At the other end of the spectrum we have Ivan Babikov: 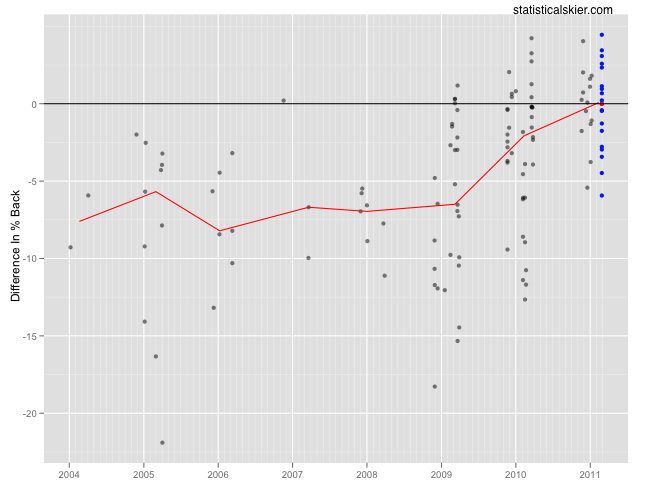 Of course, there’s the big caveat regarding how seriously Babikov was taking this race. But still, this is kind of interesting. First, his race, compared to just this season, isn’t necessarily all that bad. What looks bad is his trend over the past two season, which surprisingly includes his many strong races last season. Of course, this graph is only comparing him to those specific skiers he raced against on Saturday. But this trend is somewhat worrying to me. Hopefully he’ll prove me wrong at World Championships.

Update: After writing this, I read over at SkiTrax that Babikov fell, broke a pole and then skied for a bit with only one pole. So, um, that could be a factor too!