There were only a handful of Americans (and no Canadians) who did the freestyle distance race in Beitostølen, Norway on Sunday, so we’ll cover them and Andrew Musgrave in one post.

First a rough look at how each performance stacked up in terms of FIS points: 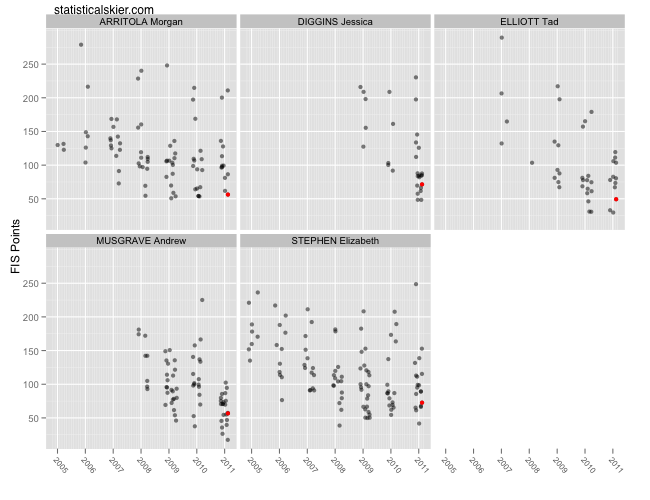 By FIS points, that’s about as fast as Arritola has skied, although that’s an imperfect measure of course. Tad Elliott is typically a much stronger skater, so it’s not surprising he had a somewhat better day as well. Musgrave’s race looks ok, but not spectacular.

Before I break these down further using percent back difference plots, I need to say a few things about some peculiarities in graphing head-to-head match-ups measured by the difference in percent back. When I make these graphs, I have to make a decision about how deep in the field to go. For instance, am I really interested in how Musgrave has fared against the folks in 200th place in a race like this?

As much as I can, I try to make a reasonable decision here, but it can vary from graph to graph. If someone finished 25th, I may only compare them to the top 40; if someone finished 60th out of 130 I might go all the way back to 80th place. I also on occasion will go a bit deeper than usual for skiers who have not raced in Europe as much, in order to catch a bit more data to work with.

Long story short, since many of the Americans were higher up the results sheet today, I didn’t have to go as far down to get some decent comparisons. This means the graphs can look quite a bit different from Tuesday’s versions.

Anyway, let’s get Andrew Musgrave out of the way first: 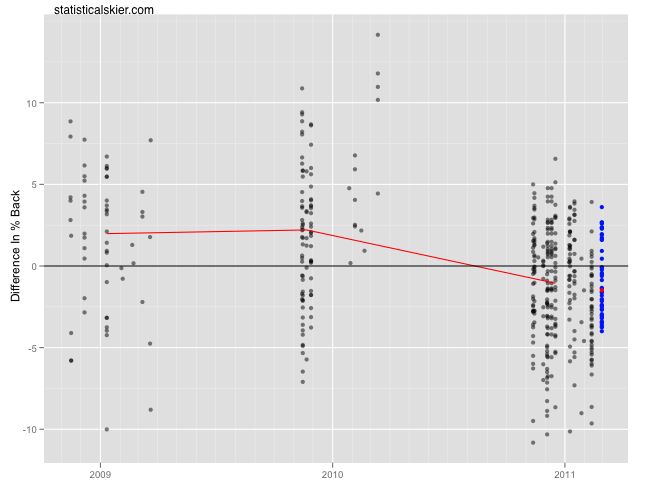 This is pretty much consistent with the FIS point graph, as it looks to be a mostly average race. The picture for Arritola and Stephen is quite a bit different: 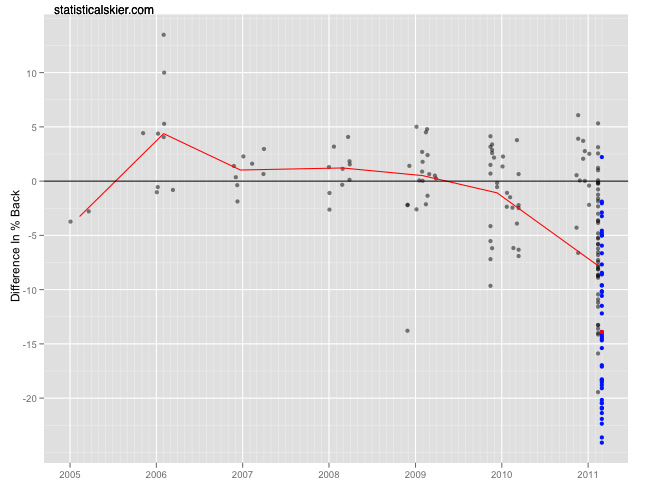 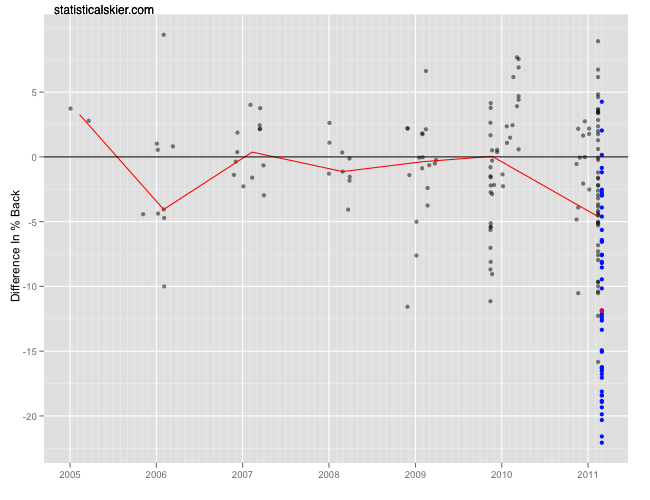 Obviously, both of these gals skied quite a bit better on Sunday. The red trend line for the median dips strongly downward for both of them mainly on the strength of just these two races alone.

Keep in mind that these graphs are making specific comparisons to a specific group of skiers. My intention is not to use these to extrapolate how well someone will ski against some other person who wasn’t there that day. So Arritola and Stephen really did ski quite a bit better against these specific skiers on Sunday than they have in the past. What that says about how they’ll ski against a more complete World Cup field is an open question, although of course it’s always better to be skiing faster, as they seemed to do on Sunday.

The graphs for Diggins and Elliot aren’t as interesting, as they have considerably less data from past match-ups, and what I can graph mostly just confirms what’s obvious: they skied a lot better on Sunday.