Ask, and ye shall receive.

Christopher Tassava noted at the link above that the top four female sprinters on Sunday all had a double-L in their names. Coincidence? A mere statistical anomaly? Or should American and Canadian parents start naming their children Allan, Allison or Ellen?

I’m being kind of silly here, of course, but what good is having lots of skiing results data if you can’t ask of it silly questions? So here you have it, the median (and middle 50%, or interquartile range) of sprinting results in WC, OWG, TdS and WSC races by athletes with and without an ‘LL’ in their name (first or last): 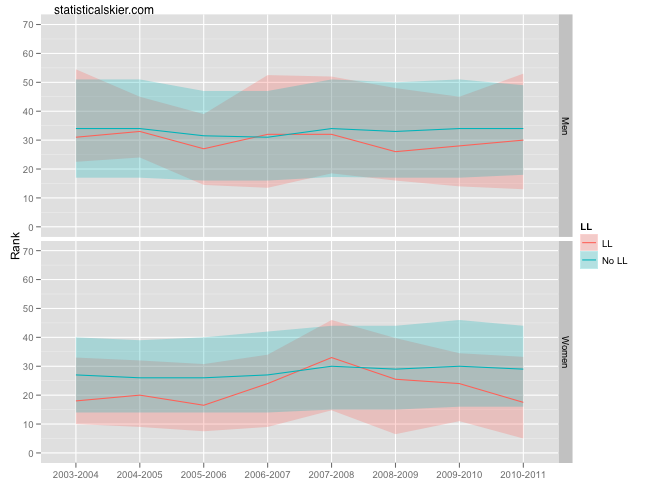 Clearly, the overlap in the interquartile ranges (the shaded regions) indicates that whatever difference exists is far from being “statistically significant”. But a difference does in fact exist, at least for the women! The crazy thing is that women with an ‘LL’ in their name have usually tended skied somewhat better, except for 2007-2008. There has been a gap for the men as well, but it’s been much smaller in most cases.

So, make of that what you will…

This is as good a place as any to expand briefly on two other equally silly factoids that raised their heads last week. The first involved the Czech coach informing his athletes that “…if you are not in top ten, you can forget a medal from the Worlds. Top shape won’t come in a week.” Lukas Bauer must have been breathing a sigh of relief on Saturday, as he just squeaked into the top ten by a few seconds! Now, I get his point, that if you aren’t in shape you aren’t going to get in shape in a week. But it’s just silly to get that specific about correlating a performance outside the top ten with not winning a medal. As I pointed out, nearly 40% of the podium finishes at World Championships came after that skier finished outside the top ten in the preceding WC race. So it’s hardly unheard of.

The other factoid noted (h/t Nordic Commentary Project) that no one since the late 90′s had won the distance WC race immediately preceding a major championships (Olympics or World Champs) and then gone on to win a gold medal. Now, I can confirm that that’s true, at least for the men. There have been some women who’ve done it more recently. But the big thing it ignores is that more than half the gold medalists at WSC or the OWG didn’t even race at the immediately preceding WC distance event. Now, maybe skipping that race provided some benefit. But of course you’re not going to see back to back victories like this when so many athletes are skipping one of the races in question! Sigh.

Oslo 2011 Sold Out for Sponsoring