A commenter yesterday noted that the TV coverage of yesterday’s women’s WBC race noted that the women’s shooting has been improving over the last decade or so, and wondered if we could make a graph to go along with that observation.

Looking at only World Cup, World Championship and Olympic races, here’s the shooting statistics for men and women by season: 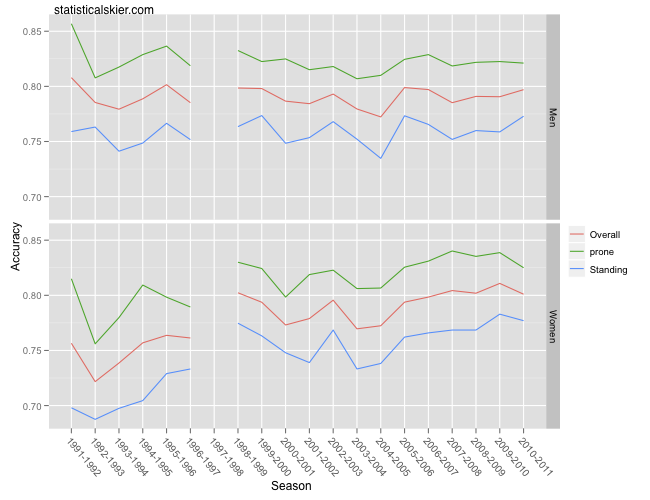 Shooting accuracy for all men and women for each season.

As you can see, the shooting data for the 1997-1998 season are missing (they’re missing on the IBU website). The men’s field has been quite stable since 1992 at just under 80% overall. The women’s field has clearly improved significantly since the early 90′s and perhaps modestly since the early 00′s as well. Interestingly, the entire women’s field’s shooting seems to have dipped downward slightly this season.

Those values cover the entire field, which includes every skier in every race. This captures a lot of not very good biathletes (relatively speaking, of course) who may have only done 1-2 races, so just for fun let’s restrict ourselves to individuals who’ve had at least 200 shots in a season: 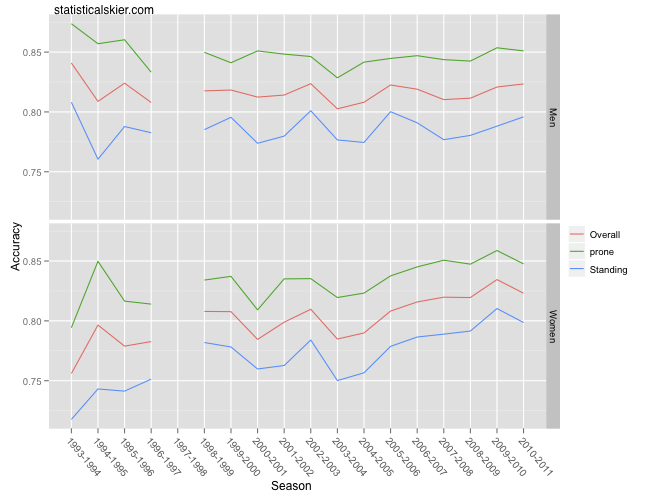 Shooting statistics for men and women with at least 200 shots/season.

You’ll have to look back and forth between these two graphs, but clearly the latter group shoot better, although the trends remain essentially the same.

The Secret of Success