Doogiski over at NordicXplained has a good post up regarding the rivalry (such as it is) between Marit Bjørgen and Justyna Kowlaczyk. The issue between the fans of these two great skiers is the question of which one is better. Shocker, I know.

Doogiski gives a good rundown of some of the limitations of comparing skiers using only World Cup points and does some adjustments for the number of races each skier did, plus a few other factors. I think this is a reasonable way to look at World Cup points, but ultimately I agree with one of his commenters that this is really fairly simple. In the specific case of two athletes who have actually raced against each other a fair amount, the least ambiguous way to measure who was better is simply to look at these specific head-to-head matchups.

In this case, they raced against each other in 7 sprint races and 14 distance races. (I’m not including the overall standings for the stage races both ladies competed in at Kuusamo and in Falun, just each individual race.) Kowalczyk beat Bjørgen in only one sprint race (Otepaa) and in only two distance races (handicap pursuit in Kuusamo and the regular pursuit in Lahti). That’s a record of 6-1 (Sprint) and 12-2 (Distance) for Bjørgen, and with numbers like that it’s very hard for me to take seriously claims that Kowalczyk was the better skier this season. And one of those wins for Kowalczyk was a somewhat unusual race, with Bjørgen holding the overall lead in the Kuusamo mini-tour and most likely not really trying to win the stage, but simply hold on to the overall lead.

In fact, if you extend this back to the previous two seasons, Bjørgen’s record is 11-3 (Sprint) and 20-5 (Distance). Kowalczyk can, and does, beat her on occasion, but it’s not exactly a back-and-forth rivalry lately.

Obviously, Kowalczyk skied very well at the Tour de Ski, and I think in doing so proved that she was (on average) better than everyone other than Bjørgen this season. (Although one could possibly argue that Johaug deserves that title.) Bjørgen didn’t do the Tour, but probably will next year, which I predict will lead to either an epic battle between the two, or a really boring Tour as Bjørgen crushes everyone.

Let’s kick things up a notch, though, focusing in on the times they’ve raced against each other in distance events overall: 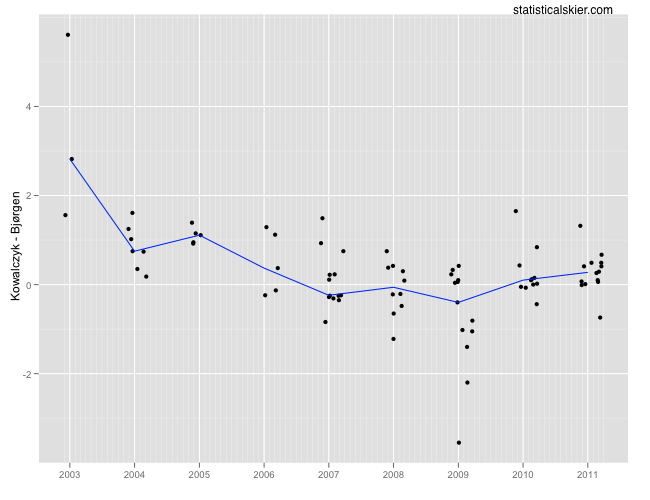 The y-axis here is the difference in standardized percent back from the median between Kowalczyk and Bjørgen. (It doesn’t really matter what percent-back based measure I use, the graph would look essentially the same if I used raw percent back or FIS points, only the scale of the y-axis would change.) Values above zero are races where Bjørgen beat Kowalczyk, and vice-versa. Obviously, many of their match-ups are fairly close, so it can be hard to tell from looking at this graph whether some of these are above or below zero, but I want to look at the forest here, not the trees.

Here’s what I see: From 2003-2005, Bjørgen was beating Kowalczyk every time and by healthy margins. Then from 2006-2009 races between the two became increasingly more competitive until Kowalczyk might have had a slight edge. During this time they each are winning close to half the match-ups, but by 2009 Kowalczyk’s victories tend to be by a (much) bigger margin than Bjørgen’s. Then in the last two seasons Bjørgen has mostly returned to her winning ways, although the amount she’s beating Kowalczyk by isn’t as large as it was back in 2003-2005. Finally, we should note that Bjørgen is 3 years older than Kowalczyk, which probably was a major factor in their match-ups early on between 2003-2005.

I wonder if I should start a little timer to see how long it takes for a Kowalczyk fan to show up in the comments to point out what changed for Bjørgen starting in the 2009-2010 season? My only comment on that matter is: correlation does not necessarily imply causation.

filling in the blanks

Diggins Holds on For Podium in First-Ever 30 K