It’s days like this that I point to when people ask if I can use all my skiing data to predict race results. The simple truth is that nothing does a great job of predicting ski racing results beyond the level of common sense, because you get days like this on a fairly regular basis.

Here’s a look at the top six men (click through for full version): 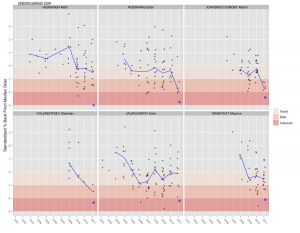 Clearly these are all good skiers who are generally capable of podium level results, although the Russian, Volzhentsev, is a bit of a new comer and Manificat hasn’t had quite as good a season as last year, in addition to being more known for his skating.

Matti Heikkinen’s effort, fully three standard deviations away from the mean is quite impressive. That’s the 26th most extreme result I have in my database (including men and women). As you might expect, values that extreme often involve a little extra help. Several of those top 26 are by known dopers and several more involved days with strange weather or waxing situations.<1

It doesn’t take anything away from Heikkinen’s win, but waxing clearly played a major role in the results today. The Swedes, in particular, again apparently had boatloads of trouble.

Stanislav Volzhentsev hasn’t raced much this season, but every FIS race he’s done this season, to my knowledge, has been a classic race. In fact, of the 31 distance results I have on record for him, 16 are classic, 10 are freestyle and 5 are pursuits. So he does seem to be focusing on classic. But being a classic specialist doesn’t necessarily overcome poor skis (which may be what happened to Lukas Bauer, although 7th isn’t too shabby really).

Here’s a version of the same graph that indicated the technique of each race, where ‘FC’ refers to pursuits: 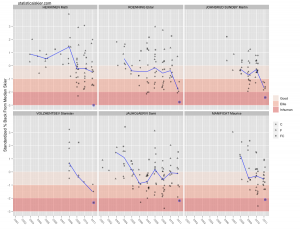 No surprise that Eldar Rønning has a deep and abiding love for classic skiing. Heikkinen’s results are more mixed than I thought they’d be, although maybe I was confusing him with Jauhoärvi, whose better results have indeed been classic.