Another race, another win for Marit Bjørgen, although Justyna Kowalczyk certainly came pretty close this time. And a dominant showing by the Norwegian and Finnish women in general, as they made up 8 of the top 10. Here’s some perspective on the performances by the top six women (click through for full version): 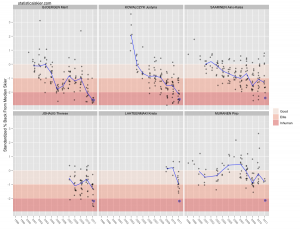 This measure I’m plotting does a pretty good job of capturing to quality of race efforts relative to a reasonably consistent benchmark, but you can only control how fast you ski. So Kowalczyk, Saarinen and Johaug continue to lay down fairly impressive efforts, both in an absolute sense and relative to their past performance, but Bjørgen just keeps skiing even faster. What can you do?

Saarinen really does seem to be back in form, as that was easily her best race of the season thus far. It’s nice to see Krista Lahteenmaki rebound from her abysmal day on Saturday at the pursuit with a career race. You may recall that Lahteenmaki actually finished 2nd on the second day of the Tour back in January, but this is measuring how fast she skied relative to the median skier and by that measure performance far outpaced that one.

But the award for “race of her life” among the top skiers has to go to Pirjo Muranen. While Lahteenmaki is young and has shown amazing promise this season, Muranen has been racing for quite some time and so has had many more opportunities to have the occasional amazing race. Mostly, she’s just been solid or decent, and this season she hasn’t actually raced all that much on the World Cup circuit, which makes me wonder if she’s had illness or injury issues.

Having four Norwegian women in the top ten isn’t that unusual, but having four Finnish women in the top ten is very rare. I checked women’s results from 1992 onward and I could only find one other major international race (WC, WSC, OWG or TdS) with four Finnish women in the top ten, a 10km TdS pursuit in December 2008. As you might imagine, the Russian women have managed this many times (>100 times, actually, though not often recently) and the Norwegian women have done it 40 times. As far as I can tell, only Germany and Italy have also managed this type of team performance, but not Sweden, interestingly.

As for the North Americans, it was about as good as you could expect: 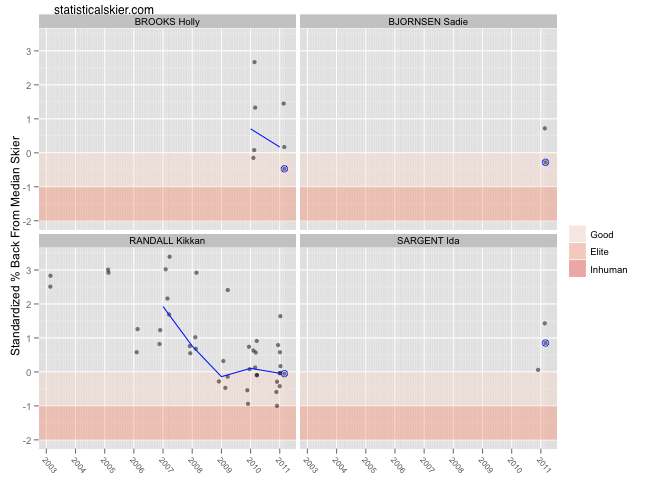 An average race from Kikkan Randall certainly doesn’t do much to take the sting out of her misfortunes in the sprint race. But both Brooks and Bjornsen had decent races, given that we don’t have much data to compare this to. But in the women’s field, efforts solidly in the ‘Good’ range are good bets to put you in the WC points, even in a regular WC race with a somewhat stronger field. So that’s a good sign from these two.

I’m not sure what the expectations were around the Canadian women, but they all actually skied fairly well, relatively speaking: 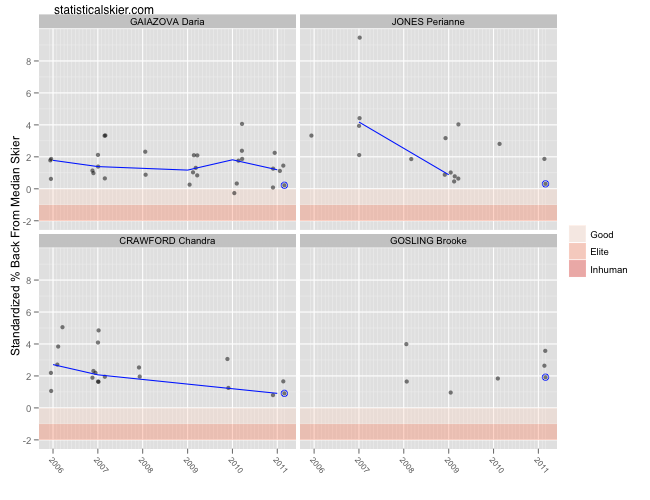 Kids Having Fun On Skis!