Finally, someone manages to beat Marit Bjørgen. If I’d had to pick who was most likely to pull it off, I actually would have bet on either Justyna Kowalczyk or Therese Johaug. Kowlaczyk is probably the consensus choice, but based on some of the commentary I’ve read so far, I feel like I’m less surprised that it turned out to be Johaug than some others seem to be. Sure, she’s young, but when I look at who in the women’s field has put in some supremely impressive race efforts this season, both Kowalczyk and Johaug have maxed out at roughly the same level. It’s just that Bjørgen has practically lived at that extreme.

Anyway, here’s a look at the top women (click through for full version): 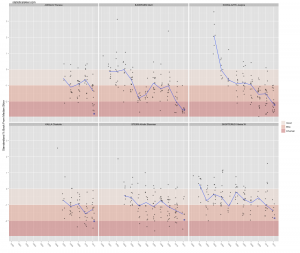 Saturday’s result is highlighted with the blue circled. I’m measuring performance using standardized percent back from the median skier, adjusted slightly for differences between mass start and interval formats.

As you can see, Johaug’s race was the best of her career by a comfortable margin, but she’s clearly approached this level of performance on a few occasions this season. Several people have asked how this ranks overall. By this measure, Johaug’s race was 2.76 standard deviations better than a ‘typical’ percent back from the median. There are only 76 race efforts in major races since 1992 that are better, including men or women.

Now, that might actually seem low to some people, which is understandable. What’s hurting her is (a) the women’s field is actually a little less prone to extreme performances and (b) it happened in a 30k. Even using percent back doesn’t completely remove differences in race length. The reason probably revolves around psychology and race tactics. In long races, once you have a large gap (1-2 minutes) there’s little incentive to try to increase that margin. Similarly, a lot of racers, once their behind by that much, will stop trying to pursue the leader and simply ‘race for second’. In shorter races, which tend to be interval starts, racers have less reliable information about their position, so even if someone is told they were up by 30 seconds in a 10k, with 1k to go, they aren’t as likely to ease up for the remainder. The result is that long races can see big gaps appear, but they aren’t quite as proportionally large as what we see in shorter races.

There are simple ways to remedy this. If we look only at women, Johaug’s race was the 19th best (i.e. most extreme) all time, and if we reduce down to only women’s 30k’s, it’s the 2nd most extreme (losing out to Julia Tchepalova, 3-20-1999). So that’s probably a somewhat better indication of how impressive that race was.

As for the Americans: 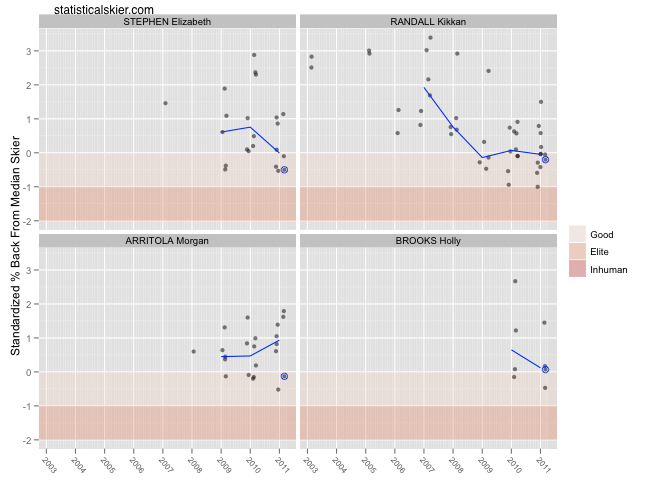 Solid races all around, although nothing outside the realm of what we’ve seen from each of them before. I’m very glad that Morgan Arritola finally got a decent result in during the Championships; her season has really been a struggle, it seems. Personally, while I’m happy to see all four Americans in the top 25, I wouldn’t get carried away. Doing it once is great, but as you can see from this graph, we’re a long way from having this kind of day on a regular basis.

For completion, here are the two Canadians: 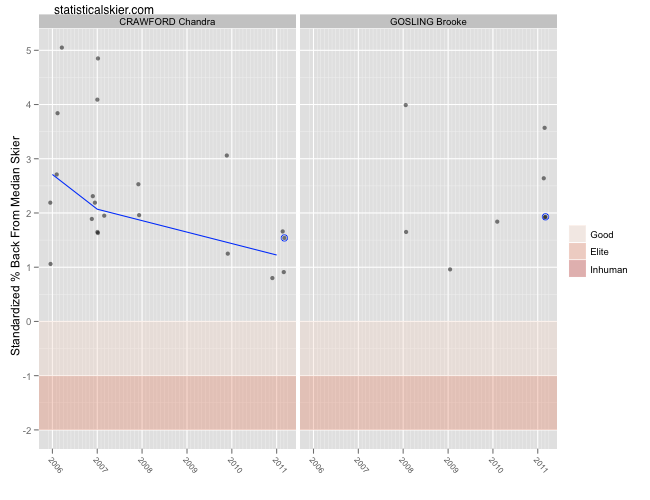 Where the Heck is Khanty-Mansiysk?