I received an email recently asking about field strength for the men’s and women’s WC fields, particularly as it applies to mass start races. Lately we’ve seen the men’s field engage in a fair bit of pack skiing, whereas the women’s field strings out more quickly.

First, I want to dispatch with a common bit of lazy rhetoric in this area. Saying that the women’s field is ‘weak’ is not the same as saying the women are weak. I’m not sure what other people mean, but what I mean by a ‘weak field’ is simply that there are fewer skiers able to finish close to the leader. To say that there are fewer women able to (nearly) match the performance of Marit Bjørgen than there are men who can (nearly) match the performance of Petter Northug is not to say that the women are somehow less talented than the men. To the extent that this happens, I consider it primarily a legacy of gender inequalities in sports and society in general. We’ve made a lot of progress in bringing more women into this sport, but professional women’s skiing still must be several decades younger than men’s professional skiing.

With that caveat out of the way, let’s look at some data.  My preferred metric for this sort of thing is to look at the number of skiers within a fixed percent of the leader. It’s sort of a ‘musical chairs’ analogy: the more skiers you have fighting for a fixed number of chairs, the more ‘competitive’ the field. Let’s begin with interval start races (click for full version): 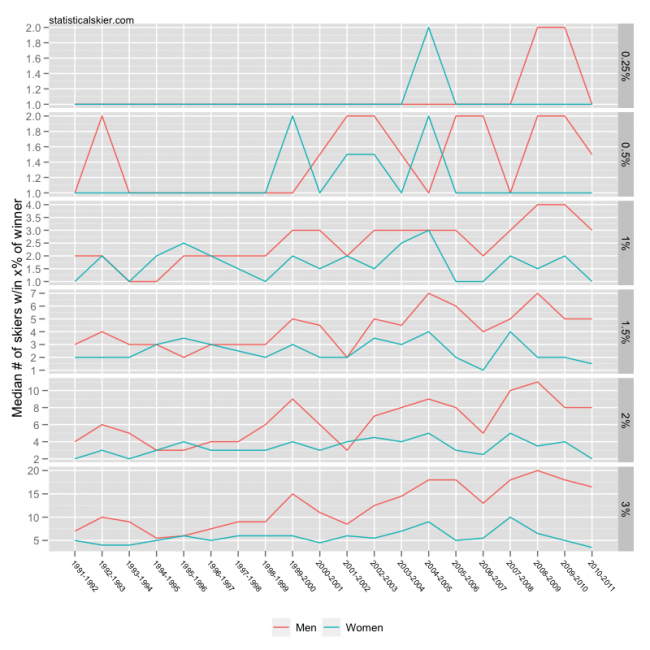 The lines track the median number of skiers within that percent of the leader by season for men and women in interval start races only. The top two panels (0.25% and 0.5%) can be ignored for now; those percent back’s are too small to be meaningful with interval start races. They will be more relevant when we look at mass start races, which are inherently less spread out.

Over the last decade, this in quite unambiguous. There have tended to be more (sometimes considerably more!) men within a fixed percent of the winner. The men’s field appears to have seen a gradual increase over time, although there has been plenty of variation from year to year. The women’s field appears to have been more steady, with the overall number of skiers within a fixed percent of the winner remaining relatively unchanged over time. On a shorter time scale, the women appear to have seen a decrease in the number of skiers with 1.5% – 3% of the winner over the past 4 seasons or so.

How does this compare to mass (and pursuit) start races? (click for full version) 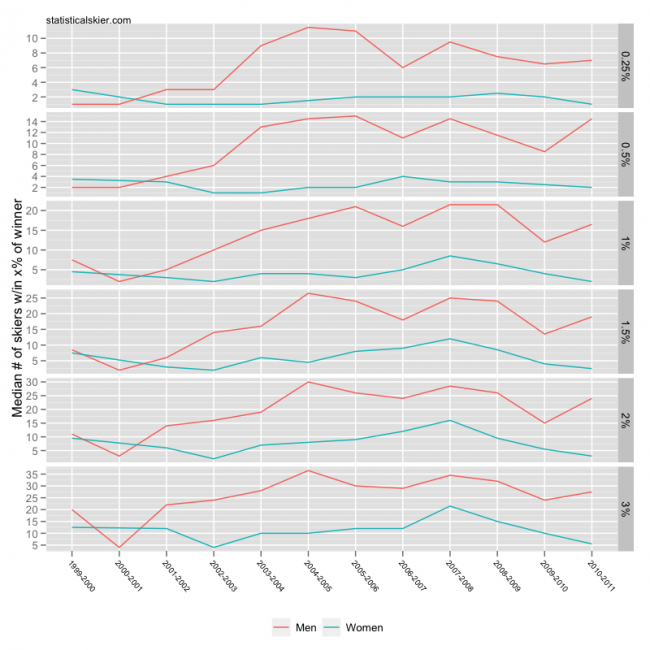 Note that the 0.25% and 0.5% panels actually have some useful data in the case of mass start races. The difference here between the men and women is even more stark. Of course, it should be noted that the number of mass/pursuit races on the schedule each season is fairly small, even nowadays. Before the last decade, they were either experimental just non-existant. Despite the small sample size, the difference between the men’s and women’s fields is noticeable.

The trends for the men are a bit different when compared to the interval start races. We saw a general growth in the number of skiers within a fixed percent back of the leader early in the 00′s, but things seem to have steadied since then. Notice that the women’s field sees a slight decline in the past 4 season similar to what we saw with the interval start races.

Well, what could have happened over the past 4 season? I’ll tell you what: Marit Bjørgen and Justyna Kowalczyk: 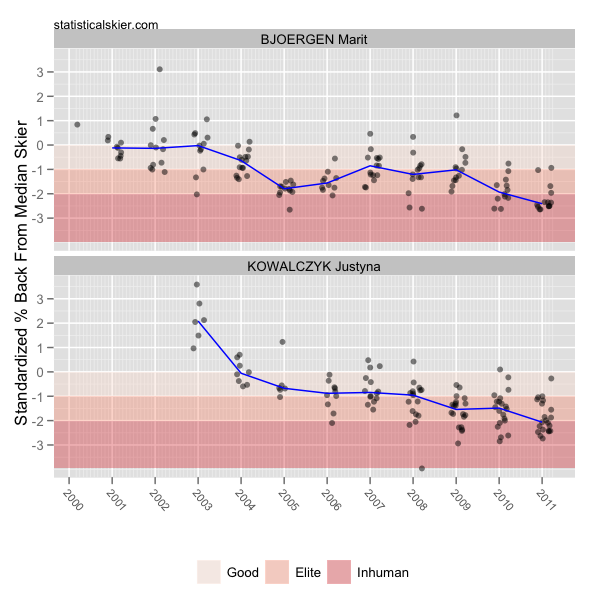 Bjørgen gets all the press for crushing people, but if you removed Bjørgen from the picture, Kowalczyk would likely be nearly as dominant (at least in distance events). Only Therese Johaug seems to have figured out how to compete with these ladies just last season, and then only occasionally. I hoped that Charlotte Kalla would be more consistently competitive as well (and she may yet be; she’s pretty young) but right now we’re still waiting.

So I think that it’s fairly unambiguously true that the men’s WC field is more competitive in the following sense: if each field were a game of musical chairs, with skiers competing for 30 chairs (WC points), there are simply more men playing the game than women. That makes for a tighter game of musical chairs.

It’s not that we’re not producing gnarly, hard-core, badass female ski racers. We just don’t seem to be producing quite as many of them as we are with the men.

A further way to slice this data would be to look at breakdowns by race length, which I’ll consider in a future post…

Ski Walking in the Sun