Since earlier this week I gave some context for what people’s performances would roughly translate into compared to how Kris Freeman and Liz Stephen skied on the WC last season, I thought I should provide some context for my context, so to speak.

So the following two graphs show how various folks from last years Climb To The Castle did versus Freeman and Stephen (just to keep things consistent, even though Stephen didn’t win last year) in the rollerski race and then how they did against them during the actual ski season. You will see that there is quite a lot of variation. First the men: 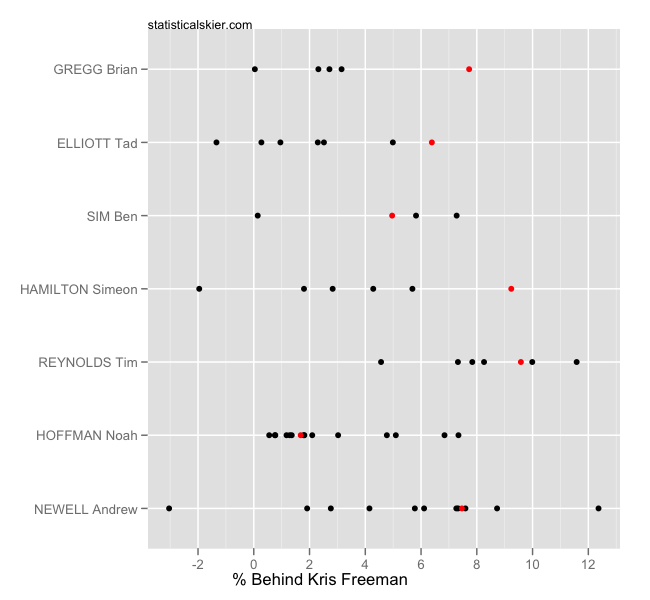 The red indicates their performance versus Freeman in the Climb to the Castle, and the black points are actual ski reason in the subsequent season. The occasional negative values (when folks beat Freeman) are generally from a Prologue, but not always. Noah Hoffman did the best against Freeman in the rollerski race, and that pattern mostly continued in the ski season. However, some people had much better luck against Freeman on snow than on pavement. This largely speaks to the pre-season nature of the Climb to the Castle and the vagaries of rollerski racing (i.e. different ski speeds). As for the women: 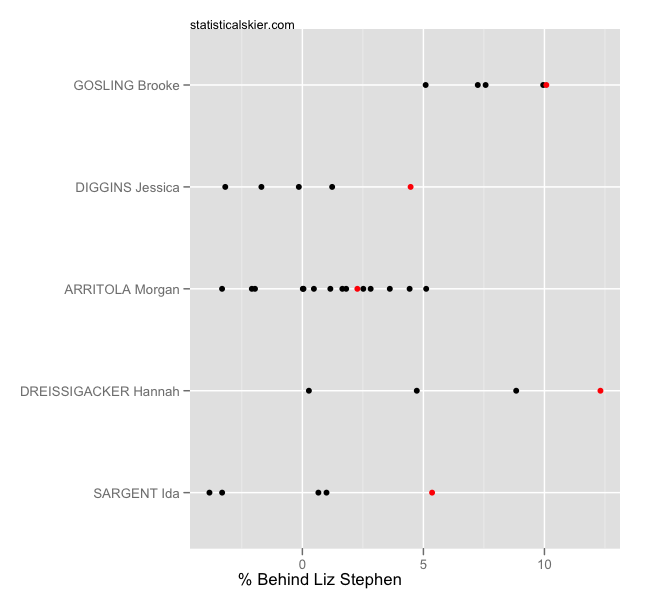 These comparisons are a bit less informative, since I had to leave out the actual winner, Laura Spector, since I don’t have any actual ski races where she raced against Liz Stephen last year. Even so, you see basically the same sort of thing as with the men. Morgan Arritola did better against Stephen in the rollerski race than the other ladies, and that was often the case on snow as well. However, Jessie Diggins is an exception.

Notes and Quotes from the Climb to the Castle