A regular reader asked me over the weekend to comment on Devon Kershaw’s less than stellar opening race of the season. Specifically, he asked:

Kershaw seems like he’s one of the most volatile skiers on the WC circuit. Is this true?

The question of how consistent (or not) various skiers are comes up fairly regularly. I think I’ve done posts on a similar topic looking at Kris Freeman. I confess that I’ve become a bit jaded on this question, since I have generally come to believe that all skiers are less consistent than people tend to think. I think we all have a general tendency to overestimate how consistent ski racers are.

It’s still an interesting question, though. I’m going to side-step it slightly and address a related concept, variability. So the following plot shows how variable Kershaw’s results have been for each season, relative to the men’s WC field. I’ve filtered this down so as to only use skiers with a reasonable number of starts per season. 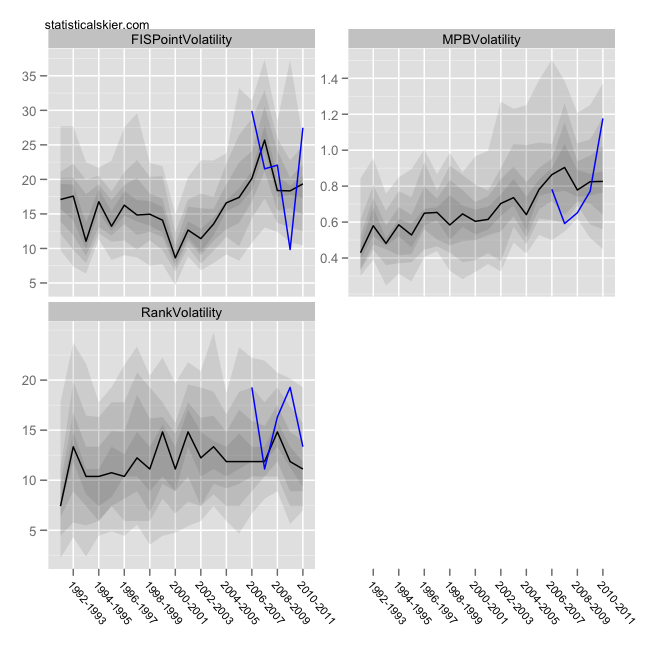 There are three panels, one for each potential performance measure. The y axis measures how variable a skier’s results were over the course of that season. The Rank panel isn’t very useful, since that performance measure is too dependent on the size of the field. So instead let’s just focus on FIS points and MPB (percent behind the median skier). The blue corresponds to Kershaw while the black line shows the ‘typical’ level of variability for the men’s WC field, with the shaded areas giving a sense of the distribution across skiers.

Both FIS points and MPB seem to suggest that last season was an unpredictable one for Kershaw. Recall that both he and Harvey tired noticeably toward the end of the season, which accounts for much of the variability. Before then, though, both measures generally suggest a skier who’s results are as variable, or less, than average.

Of course, variability isn’t necessarily the same as volatility. But now we’re delving into murkier territory. What exactly are volatile results? Consider three skiers with the following sequences of FIS points:

Which of those sequences is more ‘volatile’? Maybe we’d argue for (3), but proportionally it’s about the same as (1). Is a change of 5 FIS points the same whether you’re starting at the top of the pack or from the middle? Is doubling your FIS points an equivalent change regardless of whether you’re starting at the top or near the middle?
I don’t have any easy answers for this, but it’s something to think about. I’ll ponder some more specific tools for measuring volatility and get back to you…