A reader asked on Twitter the other day if I’d recalculate the tallies for Kris Freeman’s top ten, top three, etc. results if we went back and removed a certain Estonian skier from prior results sheets.

I’m going to preface this with some standard caveats about how I can’t know for sure when Andrus Veerpalu was clean or not clean. He certainly failed a drug test recently, and the way public opinion works with doping is that basically all his results are now suspect. I’m agnostic on that question, but since this was a fairly interesting data exercise, I thought I indulge the haters out there.

But I’m going to take it one step further and tally the missed opportunities for all skiers, not just Freeman, if we remove Veerpalu. We’ll start with the least important consequences and work our way up.

There were 78 different skiers who would have moved up into the World Cup points (from 31st to 30th) if you removed Veerpalu. There wasn’t really one skier who bore the brunt of this; the most it happened to any one skier was 3 times. North Americans in this group include Kris Freeman, Carl Swenson, George Grey,  and  Dan Roycroft, all once.

Next, removing Veerpalu will move some skiers up from 11th to 10th. This was also fairly evenly spread out among 43 different skiers, including Carl Swenson again.

More dramatically, removing Veerpalu from the results will bump 13 different skiers up from 4th to 3rd. Here is where we finally include Freeman’s famous WSC “medal”. Also notable is that Mathias Fredricksson would gain three more podium finishes in WC races due to this change.

Finally, the big kahuna, and I was a little shocked at the results. There were five skiers who would gain a victory out of this transaction. Two Olympic gold medals and two WSC gold medals. When Veerpalu’s ten wins get apportioned out, one skier gets five of them: Frode Estil. And it kind of makes sense, since he was another classic ultra-specialist.

I didn’t bother removing any of the Finns or Russians (although a lot of the Russians who’ve been caught haven’t been nearly as accomplished). Perhaps I’ll tackle that in a follow up.

I jest. It’s just that Maurice Manificat’s name looks like what a dumb American who doesn’t speak French might think the French word for ‘magnificent’ is. Heck, maybe Manificat is somehow etymologically related to ‘magnifiques’ or a synonym, but I wouldn’t know.

In any case, he sure had a good race a few weekends ago in Bruksvallarna. How good was his race? Well, let’s see how it stacks up versus how he’s fared against that particular field in the past: 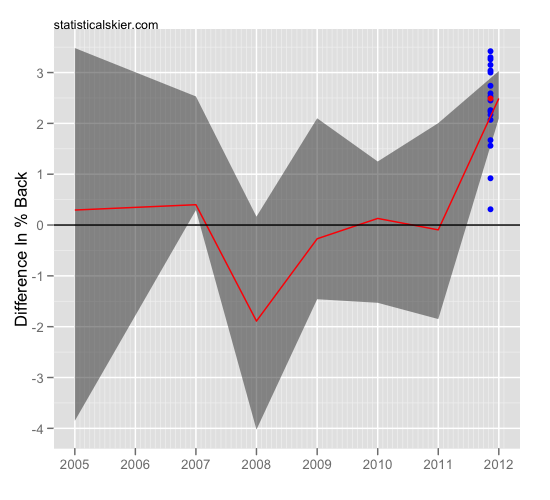 I used similar graphs a lot last season, but I’ve updated the look of them somewhat. The dots are from that weekend’s race, and each one represents the difference in percent back between Manificat and the others in the top 20. All values are greater than zero because Manificat won.

The shaded area and red line show the typical (and range) of values for Manificat prior to that race. Note that with the exception of a somewhat poor season in 2008, he had been basically on par with this particular group. So this result is not what I’d call ‘typical’. Indeed, Manificat followed up this performance with an OK but not great 17th in Sjusjøen. That’s not to say he won’t regain that kind of form, but it’s possible that we’ve simply seen the range of performances we’re going to see from him.