Christopher Tassava chimed in with another request, regarding the news this week about Christian Hoffman’s 6 year suspension. Since I did post looking at who stood to gain if you removed Andrus Veerpalu from past results, he wanted to know what it would look like if we did the same thing with Christian Hoffmann.

It turns out in this case that the beneficiaries aren’t nearly as concentrated on a few individuals, so I’m going to pick and choose who I highlight here. Removing Hoffmann from the results would impact the winner in three instances. One is of course the famous 2002 Olympic race, in which the “official” second place finisher was Mikhail Botvinov,  so let’s just call that new podium Skjeldal, Piller Cottrer and Bjoerndalen. For the other two, it would have meant regular WC victories for Teichmann and Sommerfeldt.

Ultimately, I think Piller Cottrer and Skjeldal would have the biggest complaints, since they also would be bumped up from 4th to 3rd on at least one other occasion. Alexei Prokourovov would also have gained two 3rd place WC finishes, but the rest were split between a range of skiers.

As for scoring WC points at all, we can identify a few North Americans again: Carl Swenson would have picked up WC points on two more occasions, James Southam (once), Donald Farley (once), Stephan Kunz (once) and reaching way back, Marcus Nash (once). At this level, the list of names is an eclectic mix of the famous (Piller Cottrer, Elofsson, Hjelmeset, etc.) to the not so famous (Diego Ruiz, Kay Bochert, Peter Michl, etc.).

In all, 90 different skiers would have gained an additional top 30, top 10 or victory. That includes several other skiers also suspected or convicted of a doping offense. Maybe during the off-season I’ll attempt a more complete assessment that attempts to remove every single skier possibly connected to doping, but that’s a bigger project.

Some of the other US skiers skipped the sprint relay to do a FIS race in Austria on Sunday, and by all accounts skied fairly well. Liz Stephen rather handily won the 5k freestyle, and Noah Hoffman finished 3rd, 9 seconds ahead of Kris Freeman.

But of course, comparing Hoffman to just Freeman is risky, since any one skier can have an off day. So let’s see how that result compares to his past results against the entire field: 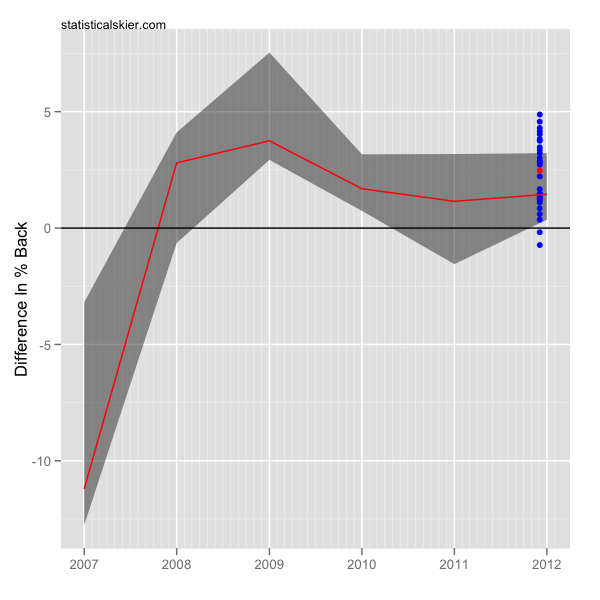 So, remember that positive, higher values indicate better performances for Hoffman. Up is good.

The blue dots are from this particular race in Seefeld (notice only two are below zero, corresponding to the folks who beat him). You can see that this is more or less in line with how he’s fared against these skiers in past seasons. Perhaps a little better, but not dramatically so.

As for Liz Stephen, here is the equivalent graph for her race: 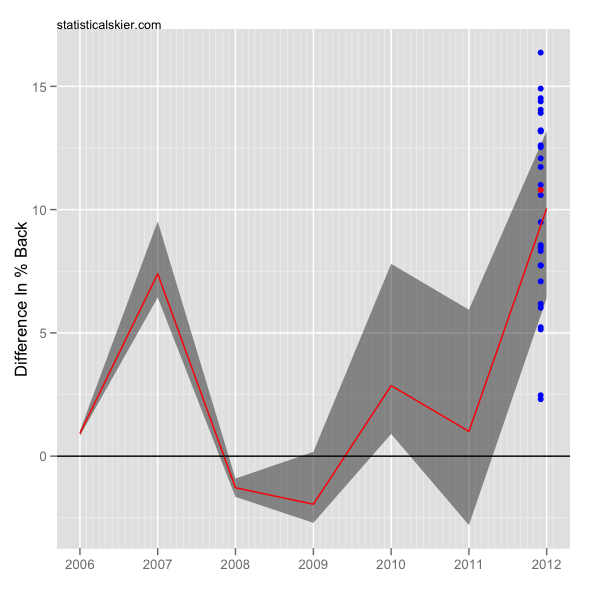 Keep in mind that the 2012 section of this time series is based on a very small number of races. So the relevant comparison to make here is the blue dots to the shaded area in previous seasons. And this race was significantly better than she’s fared against these skiers in past seasons. By a large margin. Reason for optimism, I think, for when she returns to the World Cup.