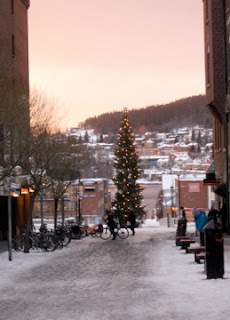 Christmas comes to Östersund – but we found winter in Austria!

The first week of World Cup competition is completed, and we’re already getting things underway here in Hochfilzen for World Cup #2. It’s amazing how quickly the season starts to go by once the racing begins! Fortunately, Hochfilzen has had a nice snow storm to make the skiing good and the view wintry. Unfortunately, France cannot say the same. Instead of heading to Annecy-Le Grand Bornand next weekend, we’ll be staying put for another week in Hochfilzen. We were all looking forward to skiing a new venue and seeing some new places along the way, but mother nature just didn’t want to cooperate this year. Annecy hopes to host in December of 2013 instead.

My racing so far has not been exactly what I hoped for. While I was able to shoot well and move up into the points in the pursuit in Östersund, my skiing just hasn’t been there. I tend to do better as the season goes on, and indeed last year my best races were in February. However, it’s still hard feeling like you’re not skiing where you feel you can. My coaches are confident the times will come, and already they see improvement from Östersund to Hochfilzen. I’m trying to be patient and confident too…though that’s sometimes a tall order for an athlete! 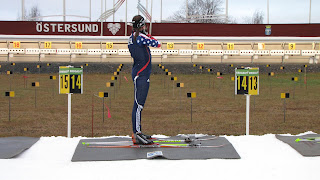 Shooting has been solid; now we just wait for the skiing to follow. (photo: Jonne Kähkönen)

With 2 penalties, I just made it into the pursuit here tomorrow so I’m looking forward to shooting a little better and hopefully moving up. Every rung on the ladder must be touched before I can get where I want to be, so tomorrow I’m hoping to take another step up!

Off Camber, Episode 2 — On The Road