For the past two weeks the MOD Squad has been living and racing in the Twin Cities of Minnesota. Methow native Brian Gregg and his wife Caitlin, both pro skiers, graciously opened their home to me for the entire period and provided generous hospitality throughout. The race week was set Tour-style, with five races held over nine days with overall scoring based on cumulative points accrued at each start. There were four distance races, two on the first weekend and two on the second, with a sprint qualifier held last Wednesday evening to divide the week.

The first three races were held at Theodore Wirth Park in downtown Minneapolis. The park is a great venue – lots of rolling terrain and climbs which offer decent vertical but also allow for some really big, powerful skiing. Because of the mournfully dry winter the midwest has been experiencing the course at Wirth was confined to a roughly 2.5km loop, with the sprint course being a slightly smaller version thereof.

The first race of the series, a 10km individual start classic, was not my greatest. It happened to be the first classic distance race I had competed in since last year’s National Championships in January of 2011, so I was unsure what to expect. Distance races have been steadily improving this year but each technique is different. Plus, my points for the seed lists were partially based on last year’s paltry results so I was starting well away from the A seed, something which demands a lot of internal pacing strategy without the advantage of being around faster skiers. I managed decently and skied to a 17th place finish, about 50 sec out of 1st. One of my goals for this season has been to diminish the gap between me and the podium, so in that way the classic race was a success. 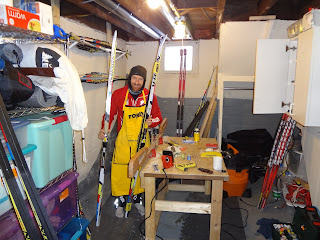 Brian in the waxroom, prepping boards for the week’s events.

The next day was a 15km skate individual start. For this race I was more intent on a good result; my skating has continued to be strong in every race and I’ve grown more confident with where I can finish in the pack. Again, I was seeded ahead of the lead pack such that I skied the first lap alone before lapping through and picking up the A seed. The picture above shows where I latched onto Brian as he began the race, offering me a great chance to pace with him. As it happened, he went out like absolute gangbusters and after two laps with him I dropped off. I was nervous that I had done myself in at that point but I drew back in, calmed down and found some speed for the remainder of the race. This is one aspect of my fitness this year which I’m really pleased with: the ability to go over the red line in an effort and to recover. Before, I would do that and the race would be done. I would have one chip and if I spent it, it would be all I could do to just ski to the finish.

Anyway, the skate race was better and I finished 13th, about 12 sec out of the top-10 and a minute from Matt Liebsch in first. Time for some recovery. We spent the next few days doing some easy distance training at Wirth before the night sprint qualifier on Wednesday. This race I wanted to win. I knew I could do so, and it was just a matter of executing well; the race was a winding downhill section into the main climbs of the course, which took you all the way back up to the finish. My plan was to ski really big through the downhills and gradually ramp up speed through the climbs until I was at maximum, then kill it to the finish. I executed that plan to a T, and crossed the line almost catching my 15sec guy. As it happened, FOUR guys (myself included) finished within eight tenths of a second from one another. I was fourth in that line, and finished fourth overall. It was a great effort and despite wanting to have won, I took comfort knowing that I went “basically” as fast as the winner. The speed is there.

Now we move to Green Acres. The original venue for the final two races of the week had zero snow so Green Acres agreed to host on their man-made loop. The course skied rather crazily, with three short, steep walls and one long steep uphill interspersed by dead-flat terrain. Despite initial impressions though, it was a damn tough effort. The classic mass start was four loops of a 2.7km lap, with the 3.3km skate loop adding a circuit in a rolling field.

The mass start was epic with crashes. See my Facebook page or johnnyklister.com for the video of the crash which took place 200m from the finish. By sheer luck I managed to extricate myself from that one unscathed and with all my equipment intact, and set out to hold the lead group. We stayed together well until some breaks happened and I unluckily got caught in a few crashes later on, including one where I was trying to pass a lapped skier who didn’t quite know WHOSE left I was referring to when I yelled it at the top of my lungs on an uphill. The perils of multi-lap races.

I was really happy with my classic race effort and finished 9th on the day, only 21sec out of 1st.

Today’s race, which finished out the week, was a 20km pursuit start based on yesterday’s finishes. The pack would be fierce and my plan was again to let the leaders sort things out and arrange for some attrition of the group, and I would then start picking up my pace, and picking off stragglers.

Pat O’Brien and I getting going in the 20km pursuit (photo courtesy davidjowen.smugmug.com)

Out of the start the pack quickly started to rejoin, but I tried not to get caught in the excitement of regaining them. I knew with 20km to go I would need all my energy later on and that others in the front may well drift back. I allowed the pace to be as it was and slowly worked my way forward, until by the end of the second lap I was on the front pack itself.

Leading a group into the stadium on our third lap (photo courtesy davidjowen.smugmug.com)
Shortly into the fifth lap things started to happen. Liebsch went off the front (as expected) and the pack shattered. I strove to stay in place, skiing through the people who had been shelled off and holding off the guys who were gradually accumulating behind me. By the end of lap six I was leading a couple guys through the race and knew that eventually one of us would have to break in order to get to the finish line first. Positions 1-3 were settled; those guys were 20+ seconds ahead of us and not looking like they were slowing, so it was up to me to punch it at the right time and secure 4th in the pursuit. About 1/2 km from the final climb I made up my mind, knowing I would just make it hurt real bad and either I would break, or they would. I hammered into the climb and attempted a jump skate (failure), then just upped my tempo and cranked hard. The coaches at the top yelled to me that I had opened a gap, and I dropped into a low tuck on the downhill approach to the stadium, where I then threw down as much of a sprint as I could manage, finishing 4th in the pursuit and 3rd in the day’s elapsed time. Best Super Tour distance finish!

A rather ugly finishing sprint, with Karl Nygren (CXC) in the background (photo courtesy davidjowen.smugmug.com)

This week has been really rewarding, both in terms of straight results but also for my overall confidence in my abilities right now. With my distance and sprint results aligning so closely I’m excited to see where I can get with further training both within the remainder of this season and in preparation for the next.

A very special shout-out goes to CXC coaches Jason Cork and Gus Kaeding, for the fantastic service they gave me waxing skis during the week. Every race I stepped to the line with total confidence in my boards – both of them are some of the best techs in the country and the results of their athletes reflect that expertise.

A brief, but significant note on equipment: this season I have had the pleasure and good fortune to be working with Peter Hale of Madshus and Mark Waechter at Nordic Ultratune to create a ground-stomping fleet of Madshus skis. Both of these guys have had a HUGE impact on my racing this year and my skis are, top-to-bottom, super fast. If you’re thinking at all about purchasing new equipment, I strongly urge you to check out Mark’s selection, either at his store in Winthrop or online at www.ultratune.net. The Madshus package is unbeatable and when paired with an Ultratune grind you’ve got a combination guaranteed to dramatically improve your skiing experience! ‘Nuff said.

I get to head home tomorrow after nearly five weeks on the road, only to turn right back around and head to Sun Valley on Thursday to race the Boulder Mountain Tour with my Dad. Thank you to everyone who has been so supportive of my efforts these past few weeks, whether it be with housing and food or simply encouragement and tele-cheering. Stay tuned!