Holly BrooksMarch 22, 2012
Once again, sorry for the delay in posting. I suppose I’ve been busy hopping time zones, countries and racing scenes.  Surprise, surprise, racing takes it out of you and add some intense travel on top of that plus the new-found 75 degree heat that greeted us in Vermont and I’m tired. But don’t worry, not tired enough to pull out a few more good races on good ole USA soil! 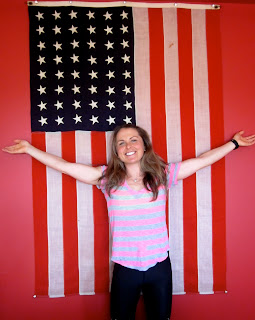 Pretty happy to be back on US Soil!
To rewind… My last post was right before the Engadin Night Sprints in Downtown St. Moritz.  This was my first night sprint ever and it didn’t disappoint.  There were no qualifiers or times, just elimination and head to head battle.  As in any night sprint, there were some good crashes, it was almost impossible to pass and there was some nice cash on the line – in the form of Swiss Francs. 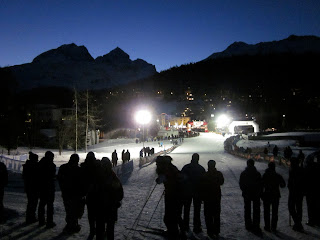 Night sprint course – most of the spectators were “in town” at the start and finish…. As you can see, the upper section was QUITE dark, living up to it’s name (Night sprint!) 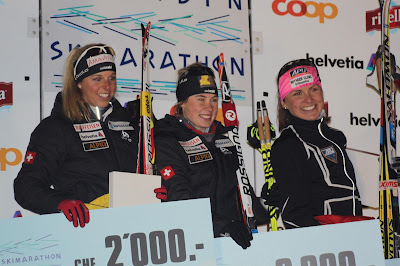 Here we are on the podium.  The two other girls are Swiss, from just over the mountains.  Lauren, the girl that won had her first World Cup podium back in December in the Davos Skate sprint. 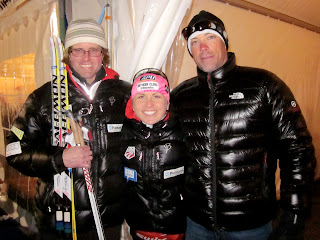 With Clark (left) who made fast skis and team leader, Tony (right) who had all the answers!
While in Switzerland we did some serious spectating and cheering from the Telly. A big group of us would pile into a room and yell at the TV, cheering on our friends. Highlights were abundant and we had a blast cheering on Susan Dunklee when she claimed 5th at Biathlon World Championships, Bryan Fletcher (Nordic Combined) when he won the Oslo World Cup and the Hoff (Noah) when he was leading the 50k Holmenkollen! 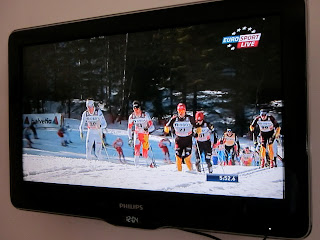 Watching races live in Europe is a blast….. 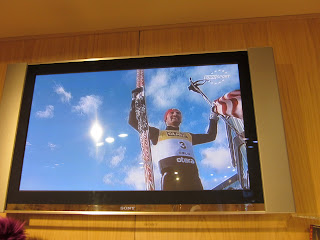 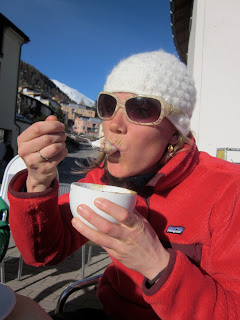 We had a cappuccino or two… 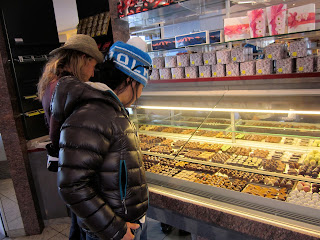 And also gawked at the amazing abundance and selection of Swiss chocolate
The night before the race we had a big pre-race meeting and Tony delivered our bibs.  Here is the whole crew, minus Billy Demong who flew in directly from Oslo, arrived in the middle of the night, slept two hours, raced the race and flew back to the states, all in the span of about 24 hours! 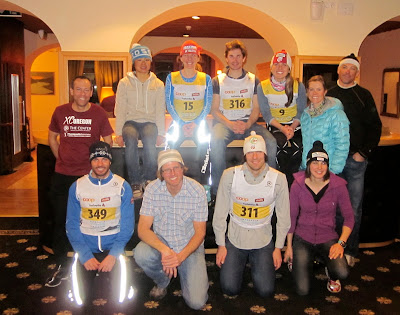 Front row (l-r) Lars Flora, Clark, Torin Koos, Bettina Gruber (Swiss/Torin’s girlfriend) Back row (l-r) JD Downing, Evelyn Dong, Caitlin Compton Gregg, Matt Liebsch, myself, Nicole Deyong & last but certainly not least, Tony.
So, unfortunately I don’t have any pictures from the race itself. Or the finish line for that matter.  The entire experience was one part battle, one part exhilarating, one part frustrating, and one part learning experience.  Basically, I wasn’t quite prepared for the flash mob of skiers that overwhelmed the trail once the starting gun went off.  Basically, the “elite women”start with the elite men at 8:30 in the morning.  Well, there are multiple other waves of “elite” people that start at the same time, simply 50 meters behind us.  So basically, you have a bazillion people starting at the same time – skiing into a headwind.  There is no where to go and nothing you can do except for try to protect your skis and poles from being broken and anticipate gigantic crashes all around you.  As a female skier, its difficult to keep track of where the other females are because there may be 20 master-aged men in between you and them.  The first 15k or so of the race are on big, flat lakes and we faced a ten mile per hour headwind the day of the race.  What does this mean? It means that the guys in front don’t go very fast and this has the effect of a carbonated drink about to explode.  Let me just say this:  It was pure battle and I wasn’t exactly prepared for what I faced. 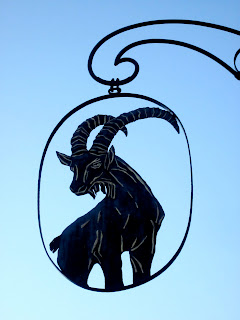 A Steinbock, native to the region….
Luckily I made it through without any broken equipment but at some point, leading up to the bottle neck of the course (big steep wall of a hill) I got separated from the lead women.  Shortly after, a gap formed with the female leaders skiing in a pack of 30-50 men – simply along for the ride. I was in a pack one group back.  Because of the headwind I was simply unable to bridge the gap to the next group and no one in my group was competent or fast enough to pull us back in.  In fact, all the men we were skiing with simply pulled over with a “ladies first” attitude.  There was simply no where to go and the race was over once I lost the female leaders at the 15k mark.  It’s unfortunate because for the majority of the race I didn’t even feel as if I was skiing hard.  I just missed the train, or the pack – literally. 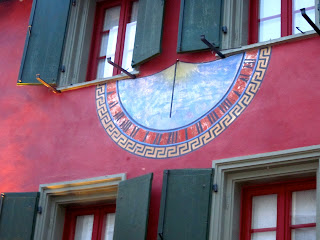 Houses in Europe and particularly Switzerland seem to be obsessed with exterior decor and specifically, window shutters.  This is one that I really like…
After the race, others compared the Engadin to a road race. In fact, I think there was a funny comment about it being similar to a road race in that you saw people out there of “all funny shapes and sizes” doing well.  It wasn’t really a race of fitness or ski skill (I am certainly not trying to take anything away from the folks that did well) but more a race of positioning, marathon experience and a bit of luck.
It wasn’t until the end of the race that I also learned that some of the top marathon girls ski with men to help get them through the pack and if need be, provide a draft to pull them back up to a group.  Coming into this experience I had no idea how many similarities this would have to bike racing.  I promised myself that when I come back to race this race again, I will bring my own domestique! 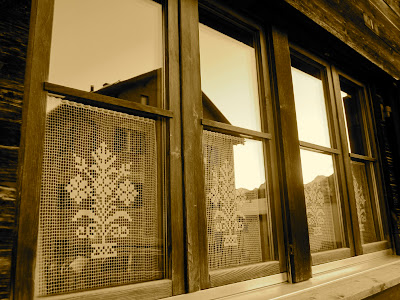 In Switzerland they also love their window lace tapestries.
All said and done, I was frustrated because I had goals of making the podium but instead finished 8th.  But, next time I will be better prepared.  Nonetheless, it was a great time and a nice change of pace to experience a European World Loppet.  There is a huge circuit over here for these big races and I certainly hope to hit up more of them in the future. Thanks so much to Tony for leading our group and providing great enthusiasm and vision for the US crew!
Following the big race half of the crew was scheduled to fly home and the other half was scheduled to continue onto Toblach Dobbiaco Italy for Europa (OPA) cup finals.  OPA is basically like the central European Super Tour and we had a huge group of Americans that participated.
First, we had to GET from St Moritz to Toblach which included four trains, one bus, one car ride – narrowly escaping Italian jail and load upon loads of gear and awkward ski bags that never seemed to fit in the trains properly. 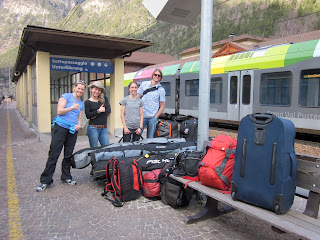 This picture doesn’t do justice for the amount of gear we had with us…. Upon our arrival in Toblach we felt very accomplished yet exhausted!
Along the way I got a good chuckle from the choices in the vending machine.  From left to right your choices are party stix, a “Maybe Baby” pregnancy test (15 euro), condoms & lighters.  Europeans are certainly more liberal about some topics…. 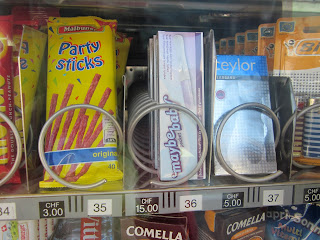 #36 – Maybe Baby!
This was my second trip to Toblach this winter, the first being for the middle stages of the Tour de Ski.   This time around Toblach was balmy and the only reason we had snow was because most of the venue is in a valley, shaded during the heat of the day. 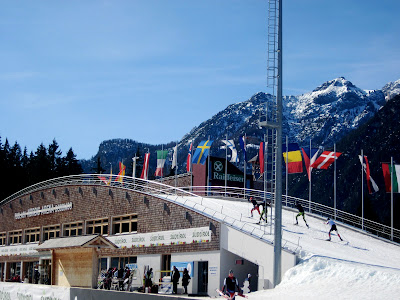 The Toblach sprint hill goes OVER the building! 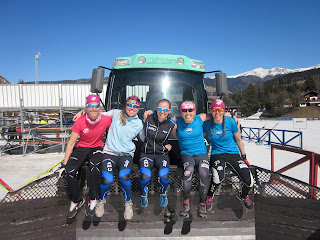 The series was also a reunion with the APU ladies team! 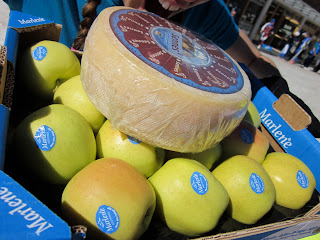 The race was a three day mini tour with back to back races including a skate prologue, a classic 5k and a 10k pursuit start.  Prizes for the races included GINORMOUS chunks of meat and cheese. (The one pictured above is the small one) 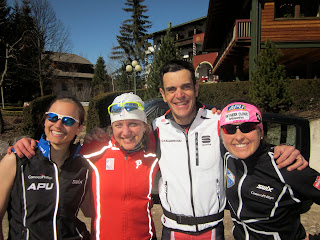 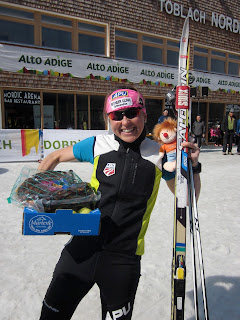 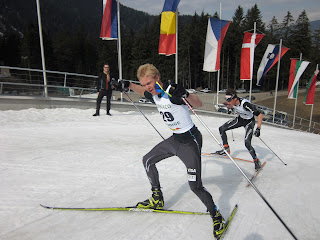 Erik Bjornsen throwing his glasses to us in the skate race while we cheered him and the other boys on! 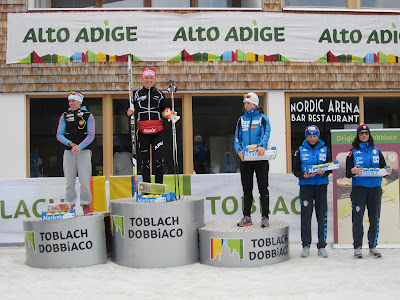 The podium for the final day!  Each of the three days of racing were surprisingly close between myself and two Slovenians, Barbara & Alenka.  In fact, the middle classic day less than one second separated the podium – in an individual start race!  This shows the importance of every second counts! Or in this case, maybe every TENTH of a second counts! 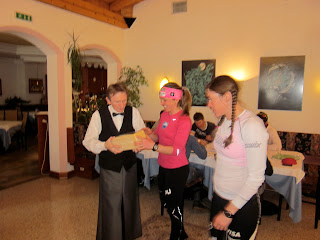 The last day I won a beautiful 5+ kilo pound of local, Toblach cheese.  In lieu of trying to carry it onto my International flight claiming, “No, I do not have any animal products!” I decided to give it to our beloved waiter for the week, Bert.  He played awesome tricks on us all week included my favorite, pretending to spill a hot bowl of soup on you only to catch the (empty) bowl with a spoon!
Racing the OPA scene was a great experience for me.  As many of you know, my rise to elite level ski racing was somewhat backwards…. OPA is usually seen as a stepping stone for the World Cup and Championship level skiing.  Instead, I qualified for the Olympics first, then proceeded to gain World Cup experience, followed by OPA. Most people attend these events/races in the opposite order.  Needless to say, it felt great stand on top of a podium and racing OPAwas a blast. Thanks a ton to Bryan Fish (team leader) and Casey, Clark & Colin for providing good boards!  Thanks also to NNF for helping provide support for the trip.
WHEW…. that leads me to where I am now, Craftsbury Vermont.  I am back with the APU team and this weekend we will race Super Tour finals and the National Championship 30k.  Crazy as it sounds, temperatures are in the high 70s…. in fact, its so hot that our team had to seek out a thrift store today to buy shorts and tank tops.  My winter ski racing attire doesn’t cut it here!
That’s it for now. Thanks for reading the novel. More to come from Vermont! Cheers,
Holly 🙂