Yesterday was the first training session of the 2013 season for Mansfield Nordic Club athletes. It was an historic day for 2 reasons:

Having a diverse group of athletes, athletes that are just entering the realm of year-round training, and only 1 coach, I wanted to lead a session that was fun, kept the group together, and addressed skills that we don’t always have as endurance athletes.

It is a mix of an adventure run/hike crossed with frisbie-golf. Only instead of chucking frisbees, we were kicking soccer balls through the woods. Low-score each hole got to do the fewest number of push-ups. 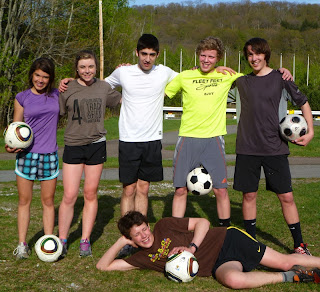 One of the greatest aspects of ski training is that we get to go on adventures. Operating on a long-term training plan, we can afford to have days that aren’t 100% focused on a ski-specific task. With a 2 month track season, you don’t have time to fool around: you should either be running, running fast on a track, or taking a day off. Training year-round for ski racing? Heeellllooo hiking, epic bike rides, running, swimming, soccer, strength, rollerskiing, yoga, speedball, basketball and rock climbing! We are the definition of crossfit. Focusing on being a skier invariably leads to more cross-training. We only have snow on the ground 30% of the year — it is a necessity to practice other sports.

That is why skiers go on to be such great endurance athletes, in a wide-variety of sports. We don’t specialize in one simple task from a young age… even the athletes that train year-round are participating in a wide range of activities. A large proportion of skiers continue training and competing beyond high school and college because they truly love sport, and because they have such a broad base in endurance sports.

Want proof? An NCAA ski champ was in the lead for the first 5km of the 2012 Boston Marathon (Glenn Randall – Boston Marathon). On the same weekend this past April, another NCAA All-American skier defended his title and won a $10,000 payout for a victory in the 5km (Ben True 5km 13:41). Former US Ski Team member Morgan Arritola won a world championship in trail running (XTERRA trail running champs) and current US Ski Teamer (and Montpelier VT native) Liz Stephen was 2nd in the same event (Skiers go 1-2 at world champs).

On a more somber note, last night I was saddened to see the following headline pop-up in my browser: “42% of Americans Obese by 2030.”

As a coach working with young athletes, I make a pledge to keep that statistic as small as possible.