The scene at 2017 BirkieFest on Feb. 25 at the American Birkibeiner trailhead near Cable, Wis. The iconic race was canceled this year due to a lack of snow and a casual ski on a 5 k loop and festival at the trailhead was held in its place. (Photo: American Birkebeiner Ski Foundation)

The following firsthand account was written by FasterSkier intern Ian Tovell, who attended this year’s American Birkebeiner in February, which was canceled due to lack of snow. Instead, the 2017 BirkieFest was held on Feb. 25 at the new Birkie trailhead and start area near Cable, Wis., with an estimated 10,000 people coming out for a casual ski on a 5-kilometer loop, on-snow demos, live music, food and a beer garden. Photos from Ian, FasterSkier contributor Vince Rosetta, and the American Birkebeiner Ski Foundation.

The 2017 American Birkebeiner will be a race that no one will ever forget. It will be remembered for a tremendous amount of effort from Ben Popp and his hard-working staff. Even though there was no race, it was a great event with 10,000 of likeminded friends and a lot of great food, live music, and the ability to check out the latest-and-greatest gear.

I was very excited to race in my third Birkie after missing the race in 2016. Heading into Birkie week, I was obviously worried, like most racers were, as the weather did not look like it was going to corporate. With high optimism, I left Boston to head to Hayward, Wis., with my two travel companions in hopes the race would still happen.

On Friday we headed to the OO trailhead to see if we could get some skiing in. As we were headed to the trail, we got the news the race was going to be canceled and turned into a non-competitive ski in Cable at the start. After traveling all that way, that wasn’t going to stop us from getting in some skiing.

However, my friend forgot his boots that day. Knowing the skiing was not going to be that great, I offered to run the trail so he could ski. We were able to do about 10 k worth of skiing on icy and grassy trails, but it was great just to be out on the Birkie Trail. We were not the only ones that had the same idea as we saw a bunch of other hopeful skiers getting some kilometers in as well.

On Saturday, we headed to Cable to join some 10,000 skiers that wanted to check out the 5 k loop and get some more skiing in. All things considered, the loop was in great shape. As the day went on and more people joined in, the trail became crowded to the point that it was difficult to ski with much speed.

The highlight of the course was at 4.8 k, where the 39K Club was there with its shot ski, making sure that the Birkie spirit was alive and well and getting everyone excited just to be at BirkieFest.

After a quick two-lap ski we were off to the food tent to get the famous on-course cookies and chicken-noodle soup. We were fortunate to test out some fat bikes at the demo, which was a ton of fun because we were able to ride them on the Fat Bike Birkie race trail. After listening to some live music, collecting our fair share of free ski ties and other goodies, we headed back to our hotel to start planning our trip for Birkie 2018.

Though my 2017 Birkie experience was not the one I was hoping for, just being on the Birkie trail with 10,000 other people felt like any other Birkie. The atmosphere and camaraderie at this race is unmatched in my experience, and being a part of it is truly special. This year was such a great time even without skiing that I know that it will be the most memorable Birkie of my career. I am looking forward to returning to Cable and Hayward in 2018.

Editor’s note: 2018 Birkie registration opened May 1. The 2017 event marked the second official cancellation in the Birkie’s 44-year history. An article in the Birch Scroll 2017 spring edition (page 15) confirmed that 2017 race fees will not be refunded and presented numbers to explain why. The total cost of organizing the 2017 Birkie Week amounted to more than $854,000 dollars. Read the article here. 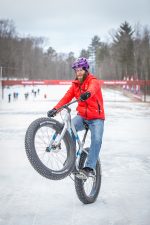 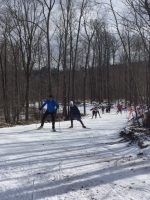 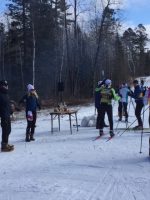 Ian graduated from the University of Vermont with a degree in business and economics. After living all over New England, he now calls Cape Elizabeth, Maine, home where he lives with his wife Ashely, and his two dogs, Duke and Marley. When he is not training for triathlon or nordic skiing, you will find him working for L.L. Bean, or hiking around the great state of Maine. He joined the FasterSkier team in 2016 as an intern.