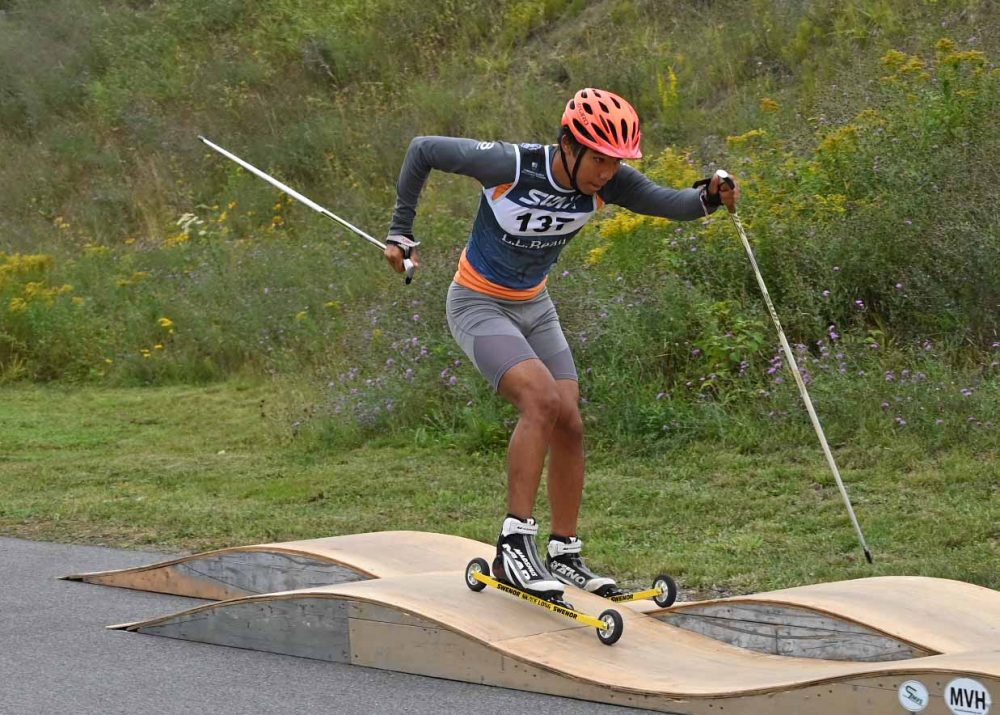 The NENSA rollerski series ramped up this past weekend outside Lake Placid, New York. As part of the drive to draw more skiers to the rollerski series, Saturday included a two race format known as a doubleday event: event 1 consisted of a 3-kilometer skate prologue followed by a 1.5-k cross-country cross (XCX) featuring several agility segments. Athletes earned a reward for performances in each event. Both events were individual start and their aggregate times were used to form a pursuit start for the first wave of the Climb to the Castle (C2C) on Sunday.

For those who raced both events on Saturday, the C2C was a pursuit style event – with the overall leaders from the first two races heading out first.

Both races were located at the Olympic Jumping Complex while between races, NENSA’s Justin Beckwith and NYSEF’s Shane McDowell assembled the undulating ramps that constituted the agility segments for the sprint prologue. At each agility segment, if an athlete couldn’t ski the obstacle, there was a safe alternate route that penalized skiers- not unlike a penalty loop in biathlon.

It was cloudy all day; the uppermost section of the loop was damp from overnight rain.

Individual results for each respective race can be found here: 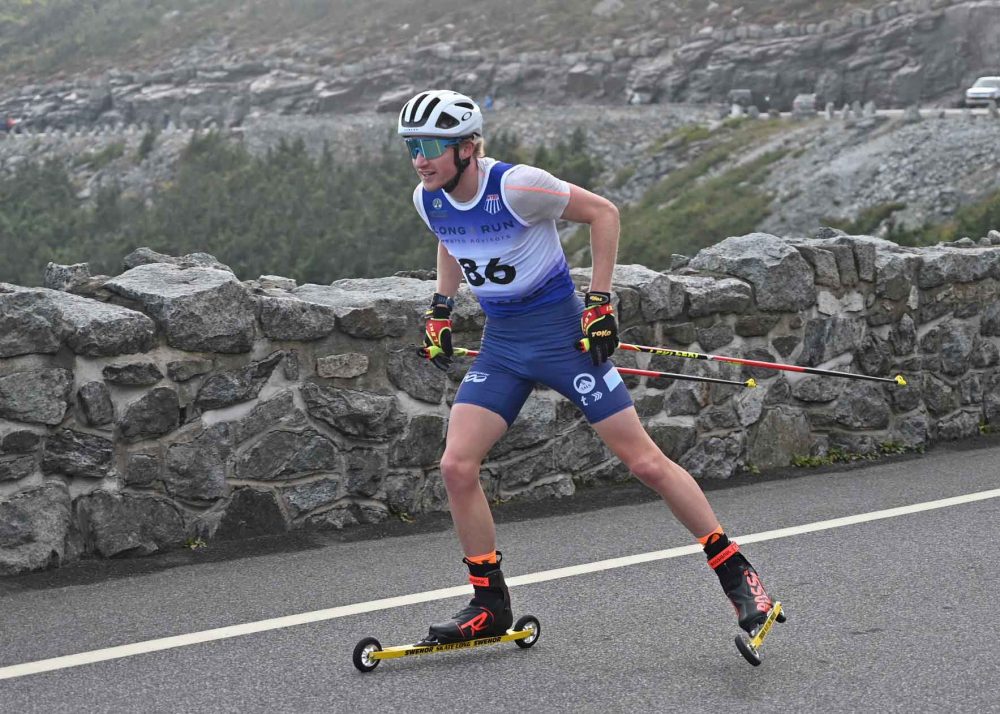 Kyle Bratrud on his way to the 2019 Climb to the Castle win. (Photo: of Kel Rose)

Climb to the Castle

Sunny skies greeted racers on Sunday as did blustery winds. Although it was dry, the weather was noticeably cooler than the 80 degrees racers endured at least year’s C2C. An hour before the start, it was 55 degrees at the toll gate, with the wind blowing steadily between 16 and 26 miles per hour.

Kyle Bratrud (SMS T2) and Williams won Sunday’s Climb to the Castle (C2C) rollerski race in Wilmington, New York. It was the first win here for both skiers. The race ascended the Whiteface Mountain toll road for five miles at an average grade of eight percent. At 4867 feet, Whiteface is the fifth highest peak in the Adirondack Mountains.

Bratrud, who did not contest either race on Saturday, broke Robert Duncan Douglas’ long-standing men’s record by 1.1 seconds, finishing in 34:55.5 minutes. Jake Brown, of US Biathlon and Craftsbury Green Racing Project (CGRP) placed second at 36:25.8. Luke Brown raced to third in 37:30.1.

Skiers who competed in Saturday’s doubleday races went out first, starting in a pursuit format based on their aggregate times. Doubleday finishers started at 8 AM sharp and were all on course by 8:05.  Open athletes started in a mass start wave at 8:06, with masters following two minutes behind.

Bratrud told FasterSkier he’d raced C2C once before in 2015. Since he did not race the sprints the day before, he started at 8:06, gradually reeling in the pursuit starters.

“It’s been a while since I’ve been up here but I really like this climb,” Bratrud said. “It’s always a really sweet atmosphere and it was a pretty solid effort. We started in a group of maybe five or six. I was at the front and set a decent pace. It didn’t seem like anyone wanted to come around me so I just kind of slowly ramped it up without destroying myself and it worked out.

“We had done the App Gap roller ski race a little earlier in the year,” Bratrud continued. “There, I tried to send it as fast as I could off the line, and ultimately I blew myself up. Here, I wanted to be a little more controlled and I knew it was a long race. I wanted to ski a nice controlled V2 the whole way.”

While both races are purely uphill, each has a distinct set of challenges. The App Gap challenge features a transition from skate to classic and climbs about 1,500 vertical feet over the 7.5-kilometer course, while the C2C climbs 2,300 feet in one unbroken grind.

“I think [C2C] is definitely harder,” Bratrud said when asked about comparing the two. “There are steep pitches on the App Gap but there are also some flat parts. There really isn’t anywhere to hide on this climb once you start going up, which is basically right at the start.  And then you get the wind.” 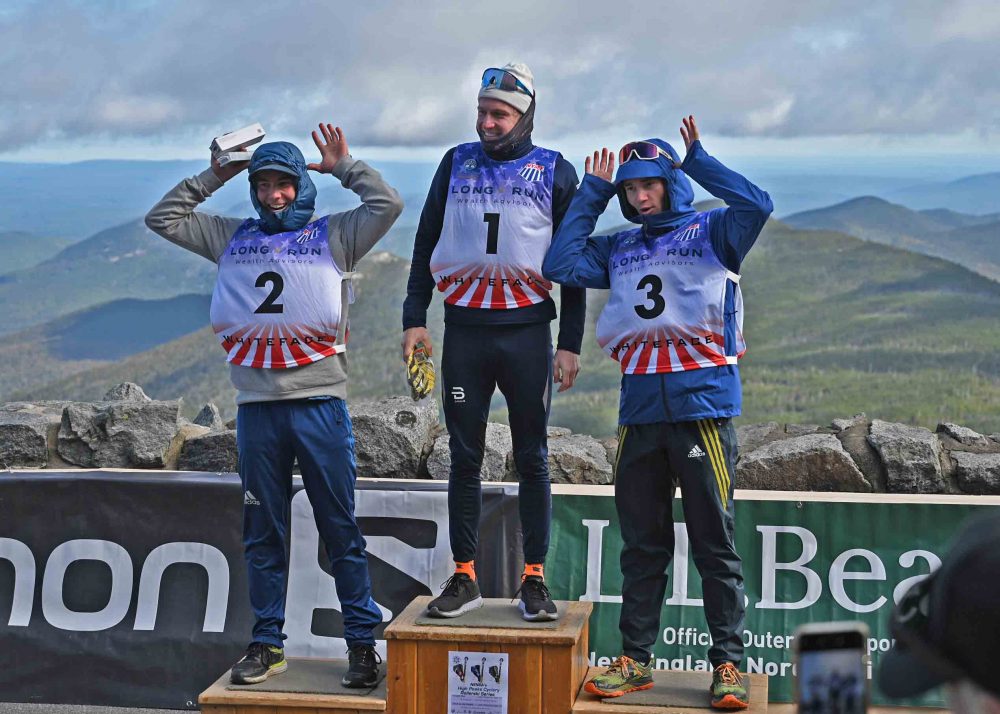 Like Bratrud, Jake Brown started in the wave following the doubleday athletes. “It went pretty well,” he said of his race. “I was able to hang on to Kyle for a couple of miles and then it was a little too much. I was hoping that I wouldn’t have to lead so I could tuck in a little bit, which I was able to do. Otherwise, I didn’t have much of a plan.  Something like this is so physically demanding, you can’t really have a plan until you get out there and understand how your shape matches the challenge.”

Luke Brown felt that the doubleday was good preparation for the C2C. “I think the efforts [in the doubleday] opened up my legs, kind of a pre-race,” he said. “I felt pretty strong, it’s a super fun road to ski up. Pretty nice weather at the bottom, and windy at the top. Zane Fields started six seconds behind me and caught up to me. We worked together for a little bit and then I pulled away from him, probably about halfway up the mountain. Then I just tried to go hard.”

With the best women’s aggregate time from the doubleday, Williams was the rabbit out of the start. Shilo Rousseau of Ontario’s Barrie XC, a junior skier, was the second woman starter as she followed 32 seconds after Williams. 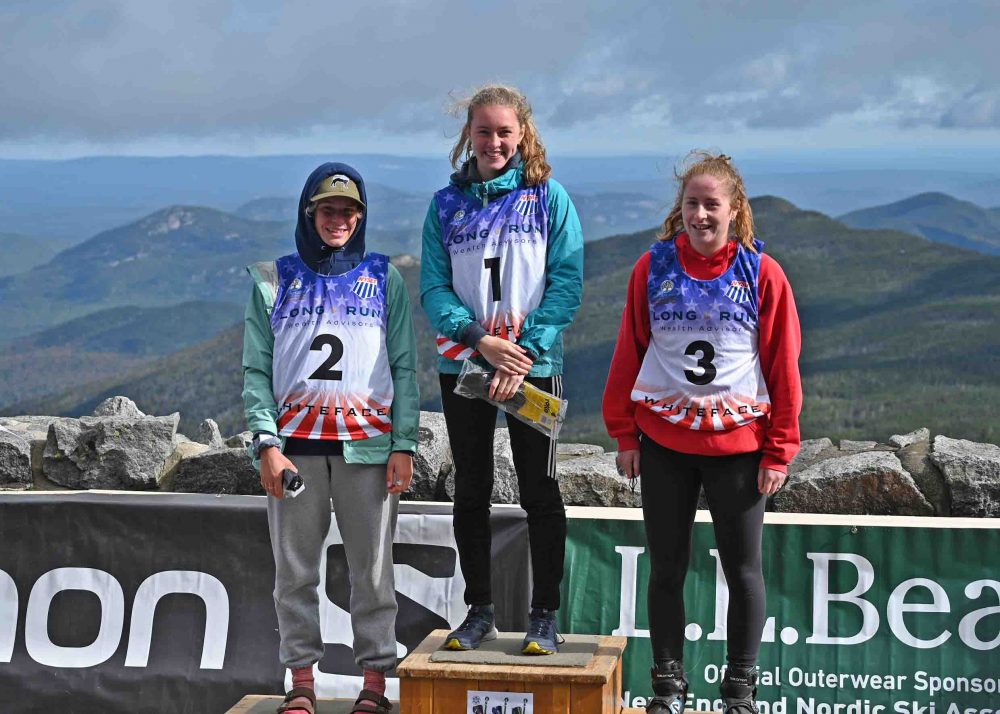 “The pursuit start meant that I skied a lot of it alone, which was different from previous years,” Williams said. “I was happy that I kept the pace going up the hill, kept trying to keep the tempo up. So it was good. My legs were for sure tired after yesterday, and I felt that probably a kilometer in. I thought that it would be my legs holding me back instead of my cardio. But I still felt like I was able to put a good effort in.”

Maddock said she benefited from working amongst a group of fast skiers.

“I was part of a train of men and hung with them until it was just the guy leading and me,” wrote Katherine Maddock, head coach of Dublin (NH) XC. “It was super helpful having him to ski with. On the flat(ish) section maybe a mile or less from the top, we could see a group of skiers in front of us. He turned around and said to me, ‘Let’s go fishing. And then he just started picking people off. It was great. Ultimately he made a move around a skier and I couldn’t match the effort so I was on my own in the wind tunnel, but I survived, which was no small feat with that headwind!”

For racers competing in all three events, the overall mini-tour results are as follows.

Catching up with C2C Finishers

Lucy Hochschartner (St. Lawrence University) has raced C2C multiple times. “It was really fun! I’ve done this race a lot of times and it’s always really hard,” she said. “But it was great to have nice weather and lots of good people to race against. I didn’t do so great [in the doubleday] so I got to move up a little bit. And not dying at the very end was fun. The wind definitely made for a slow finish.” 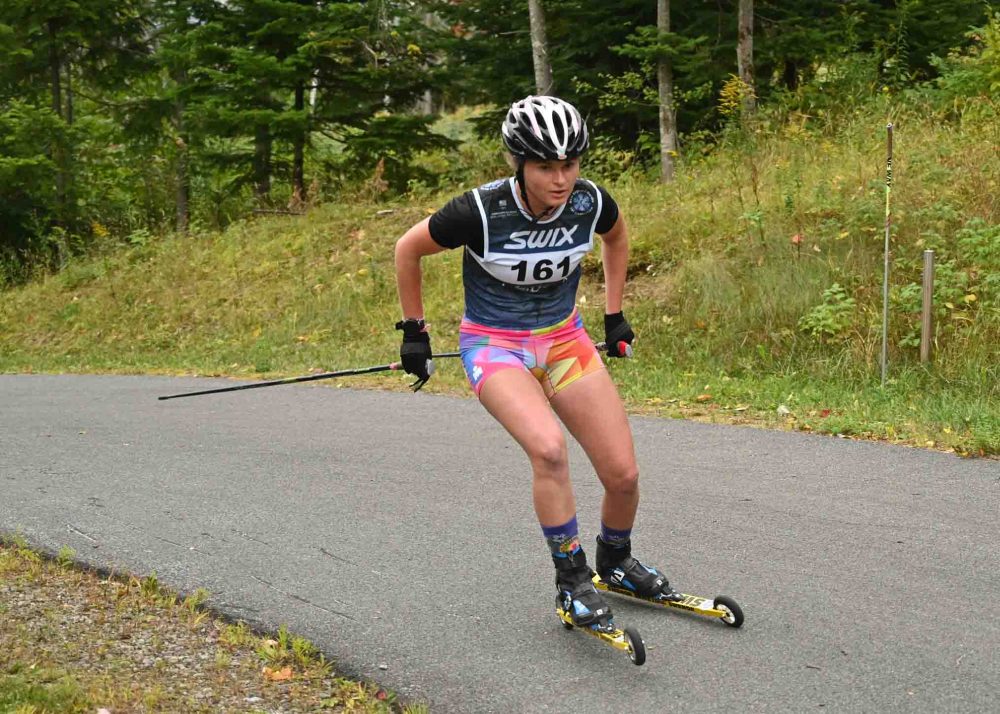 Nina Armstrong during the first day of racing at the three race mini-tour. (Photo: Peter Minde)

Nina Armstrong (NYSEF) had the weekend’s races written into her training plan. “I haven’t done [C2C] in quite a few years,” she said. “It was fun. My plan was to work into it and hopefully not die before the finish line. It was really fun having people all around you.”

Sheila Kealey, the head coach at uOttawa Nordiq was excited to place a bib on after coaching skiers at the Doubleday.

“The race was a good effort,” she wrote in an email. “Starting in the mass start I had some people to ski with about half of the time, and I was catching some athletes from the pursuit start waves ahead – so it was a quite different experience than other years with a women’s only start. My plan from the start was to try to ski with people — it was a reasonable effort. No problems switching from coach-mode Saturday to race mode Sunday!”

Before the racing on Saturday, FS interviewed Jessica Roach and Robbie Raikou from Team Hardwood in Ontario.

“The past three years, Team Hardwood has made it a point to come [to Lake Placid] for about a week in August to take advantage of what Lake Placid has to offer for skiing and for training,” Raikou said. Roach described her race plan: “I come from an alpine skiing background, so hopefully, I get to use that on the hills and the corners to my advantage. We’ve never done this course at speed before, so it should be interesting. Just going to survive it and have fun.”

Finn Dodgson, another visiting skier, noted this was his second year in the doubleday. “Today went all right. I was sick at the beginning of this week so I’ve been getting over the last bit of the illness and getting back to racing feelings,” he said. “Last year, I definitely noticed that I felt a lot better in the second race. I was warmed up and knew the course better, so this time around, I tried to get a better warmup in and get some good laps, just to see how it is and remember all the corners. The obstacles weren’t as daunting as I thought. They went well and I was able to do all of them.”

Four skiers from Montreal’s Fondeurs Laurentides had their first doubleday this year. Speaking of the race loop, Aiden Raynor said, “It’s got some twists and bends to it, that’s for sure. Quite extreme but super fun.”

His teammate Erikson Moore added, “[The course] was great.  It works almost every technical ability a skier could have, and it has a good mix of flats to climbs.”

“The second race with the ramps [agility features] was really fun and, sketchy downhill, but it was worth it,” said Mathis Desbaumes.

The Doubleday / C2C weekend suits Shilo Rousseau. She was C2C’s third-place junior female finisher and second place on aggregate time in the doubleday. After the doubleday, she said, “It went really good this year! I noticed some big improvements [in fitness] from last year and felt a lot stronger. Last year, I noticed going from the bottom all the way to the top in the second loop I felt a lot more tired.  This year I was able to be strong the whole way.”