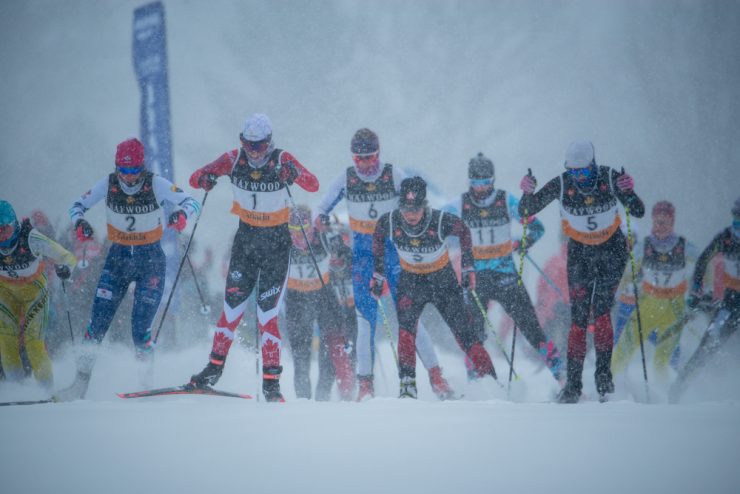 The third NorAm weekend of the season was also Canadian selection trials for 2019 World Nordic Ski Championships and a Quebec Cup event on the Bishop’s University trails in Lennoxville, which is a neighborhood in Sherbrooke, Québec. With variable weather the Mont Orford club rallied and held races all three days of the competition schedule. 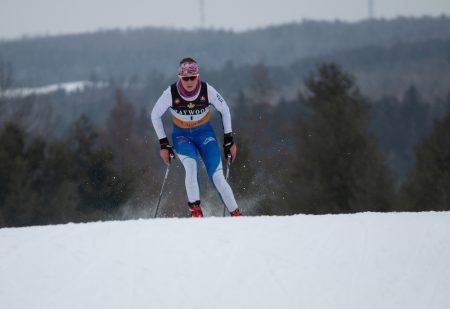 Racing began Friday with skate sprints on a technical course. The weather cooperated, with -10 C air, dry snow, and snow flurries. Maya MacIsaac-Jones (CNST) took the first selection, along with the qualifier and every heat, winning the 1.3km A final in 2:36.83. Katherine Stewart-Jones (CNST) was second (0.05) while Laura Leclair (Nakkertok) earned her first senior NorAm podium at 3.77 seconds.

“The start position was very important because the course isn’t very wide and it makes it very hard to pass,” Leclair wrote of the A final. “I wanted to start fast and stay close to Maya.”

Stewart-Jones had a similar strategy, writing “In the final my strategy was to position myself behind Maya from the beginning because I knew she was feeling strong and it would allow me to conserve energy and avoid having to pass other people.” 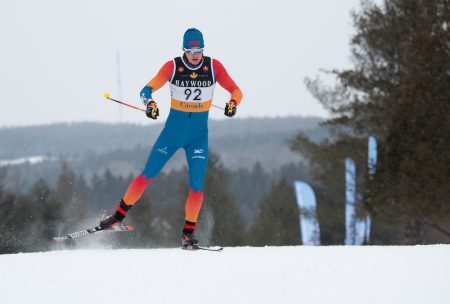 Palmer-Charrette had a plan to attack at the midpoint of the final. “Dominique Moncion-Groulx [Nakkertok] and I had the same thought and tangled up,” he wrote in an email to FasterSkier. “I thought that ended my chances but was able to bridge back to the lead and come through with a strong finish.”

“Everyone was skiing tight together in the first half of the final,” Locke wrote after the race. “I knew that the differences would be made in the 2nd half so I held my position mid-pack and made sure I was ready for when the pace ramped up. Russell pushed hard up the 2nd climb and I waited for the steep pitch to hop by him. I led down the twisty turns and through most of the finishing straight. Evan had a great kick in the last few meters of the gradual downhill finish.”

“It was a fun final, I led most of it. Julien came in front of me on the last hill and I followed him down,” Kennedy wrote. “Evan took a really good line into the finishing straight. He had a great day and I am super stoked for him.”

The individual start classic day dawned cold, but a delay to a noon start allowed legal racing at -19 C with less wind. 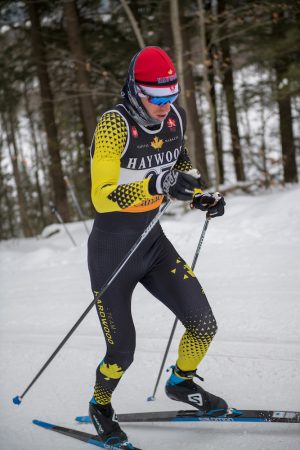 Scott Hill (Hardwood) won the men’s 15km and earned his trip to Seefeld with the fastest splits on the last three laps, with Kennedy fading on the last lap for second, 9.0 seconds back. Graham Nishikawa (CPNST) held on for third at 38.0 seconds.

“I put together my best race of the year so far in terms of pacing, tactics, technique, focus and all the other small things,” Hill wrote. “For sure double pole strength made the difference today on such a flat course. I don’t consider myself a great double poler but after I went to Norway this summer and raced some almost entirely double pole rollerski races and got my butt kicked really bad, I have been working a tonne on double pole since I got back to Canada at the end of August and it paid off today.”

Stewart-Jones won the women’s 10km, earning the selection spot along with the virtual COC leaders bib. Cendrine Browne (CNST) was second at 30.8 seconds, an improvement from her 4th on Friday. Zoë Williams (Nakkertok) was third at 1:53.5, edging out Frederique Vezina (CNEPH) by 3.1 seconds. 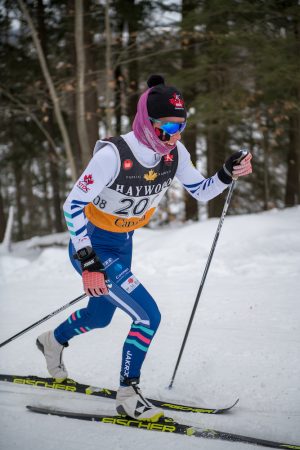 Katherine Stewart-Jones moving up in the 10km. (Photo: Ian Aitken)

“It was a pretty flat course so there was a lot of double pole. I think that what made the difference was really going out hard from the start and trying to stay as consistent as possible,” Stewart-Jones wrote. “On a course like this it’s easy to lose focus but you can lose a lot of time if you aren’t keeping the tempo high on the flats.”

Athletes from the east were less likely to comment on the cold than the westerners. All names withheld to protect the guilty. 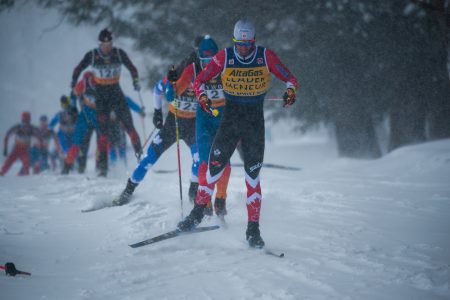 Sunday was warmer as a massive snowstorm rolled through Quebec. The trails became softer and deeper as the day progressed despite the shortened courses.

“There was a ton of snow so it was really slow,” Stewart-Jones. “Cendrine and I worked together and exchanged leads. I made a break on the last little bump before the finish.”

Browne had her final chance to get an automatic selection. “I started pretty fast, and already after 4 km, the pack was broken. Katherine and I were with a little group of 6 skiers but broke away after 6 km and skied together for the remaining 9 km,” she wrote. “I tried to attack on the last uphill but Katherine stayed with me and attacked me when there was 500 meters to the race. I was so tired I couldn’t follow… I think I attacked too early but I had to try!”

COC leader Russell Kennedy (Team R.A.D.) collected his first win of the weekend to earn his trip to World Championships, finishing alone at 57:12.6 on the four lap 19.3 km race. Hill was second at 23.4 seconds behind. Palmer-Charrette out-sprinted the remains of the original six leaders to complete the podium at 1:07.0.

“It was a hard day with the amount of snow that fell,” Kennedy wrote. “I found myself on the front early so I pushed the pace and kept pushing. Took a break on the second lap and pushed the third and fourth lap.”

At the end of the weekend, MacIsaac-Jones, Palmer-Charrette, Stewart-Jones, Scott Hill, and Russell Kennedy have met the qualification standard for Seefeld. The High Performance committee should soon announce their official selection; if there is a sixth athlete chosen, it is likely to be Browne with 4th, 2nd, and 2nd places.