Norway’s Marit Bjørgen racing to first in the women’s 10 k freestyle on Saturday in Beitostølen, Norway. It was her first FIS race since March of 2015. (All photos: Aleks Tangen)

BEITOSTØLEN, Norway — Saturday’s 10-kilometer freestyle individual start was, from the start, all about Marit Bjørgen. Her previous race was 603 days earlier on March 27, 2015 in Harstad, Norway, but that didn’t seem to affect Norway’s six-time Olympic gold medalist one bit.

“I’ll admit that I have had my doubts,” she told Dagbladet about returning to competition. “And I’ve been tired, but I made it through it and I’ve appreciated the good times.”

Fellow Norwegian national-team member Heidi Weng followed in second, 11.7 seconds behind. After  placing second to teammate Ingvild Flugstad Østberg in Friday’s 10 k classic, Weng told VG that Bjørgen, who sat out the race with a cold, was “probably sitting at home and laughing at how slow it went went. She will race fast and I think will see Marit Bjørgen as good as she has been in the past. She’s done great during the summer and fall training.”

After her second-straight second-place finish, Weng told Dagbladet that she opened fast on Saturday, but her muscles tired as the race progressed.

“It’s irritating, but I really had no chance toward the end, and it’s not that bad, really, because I don’t think I’ve ever had a better season opener. I’m a little surprised by that really,” she said.

When asked by FasterSkier if she thought she could match her performances in Sunday’s skate sprint, Weng said, “I didn’t make it through from the prologue last year so I’m hoping that I can do better than that, but we’ll see.”

The race for third place proved to be the most exciting with Østberg crossing the finish line 28.2 seconds behind Bjørgen and just 1.7 seconds in front of Norway’s Astrid Uhrenholdt Jacobsen, who finished fourth. Norway swept the top eight as Kari Øyre Slind followed 2.9 seconds later in fifth and her sister Silje Øyre Slind was sixth, another 17.5 seconds behind.

Østberg told FasterSkier that she will not be competing in Sunday’s sprint. “If the World Cup weekend had been two weeks away then maybe, but after doing two tough races in two days and since sprints takes a lot of energy rest is probably the best,” she said.

Nonetheless, a first and third place finish in Beitostølen is Østberg’s best start to a season yet.

“It is without a doubt my best season opener, and I’m super happy,” she told both FasterSkier and Oppland Arbeiderblad, a regional newspaper from her hometown of Gjøvik.

“I feel like I’m not quite there yet,” Jacobsen told FasterSkier after. “I still have some work to do in order to be in top shape, but I still ski relatively fast and I feel like I have a very good base condition so I think it can be a good year.”

Asked what it was like to have Bjørgen back, Jacobsen replied, “She wins as expected. I skied with her on my second lap and I definitely think she can ski faster. This race wasn’t Marit in her top shape.”

When asked about Bjørgen’s ability to perform as well as she did on Saturday, considering she hasn’t raced since 2015, Jacobsen smiled and waited a moment before she answered, “That’s something only Marit can do.”

Eighteen-year-old Norwegian Mathilde Myhrvold finished 27th (+3:49.7) of 48 finishers on Saturday. In 2014, she competed in the track and field World Junior Championships in Eugene, Oregon, and last season she won the Norwegian Cup. Saturday stood as her first race this season.

“Slightly after finishing the first lap I started feeling a little tired and then I skied a little slower, but I improved toward the finish and I’m happy about that,” Myhrvold said. “I may have started a little too fast and maybe that’s why I was tired.”

She figured a few races would help her return to top shape, and for the rest of the season, she’s focused on improving her conditioning for FIS Junior World Championships trials. 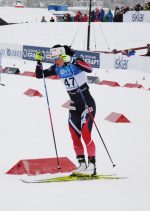 Marit Bjørgen racing to first in the women’s 10 k freestyle FIS race on Saturday in Beitostølen, Norway. It was her first FIS race since March of 2015. (Photo: Aleks Tangen)

Norway’s Didrik Tønseth repeated his podium-topping performance from Friday’s 15 k classic and won Saturday’s 15 k freestyle in 33:20.9. But the biggest surprise of the men’s race was second-place finisher Simen Hegstad Krüger, who crossed the finish line in a time that was only six seconds slower than Tønseth.

Norway’s Didrik Tønseth racing to his second-straight win of the weekend in the 15 k freestyle FIS race on Saturday in Beitostølen, Norway.

“I had nothing more to give, but this podium finish is incredibly satisfying,” the 23-year-old Krüger, who won the 15 k freestyle at U23 World Championships last season, told NRK after Saturday’s race.

“I’m hoping for a spot on the team for the World Cup in Lillehammer, but it might be too late for that,”

“We’ll be choosing the team on Monday and I think the mini tour will suit him well, so he may  receive a positive message in the coming week,” he told NRK.

Tønseth had the advantage of starting five bibs after Krüger and told NRK that he felt like he was in good shape and that he was ready to start the season. The 2017 World Championships in Lahti, Finland, are his main focus.

Norway swept the top five after a close fight for third, which Simen Andreas Sveen took, 32.6 seconds behind Tønseth. Anders Nøstedahl Gløersen was another 1.9 seconds back in fourth (+34.5), Mathias Rundgreen placed fifth (+36.9) and Andrew Musgrave of Great Britain finished sixth (+37.0).

“I feel good about the race, but I felt a little limply in the beginning,” Musgrave told FasterSkier after. “Though I was able to close some of the gap toward the end, but not enough.”

Like most World Cup skiers, Musgrave’s goal for the season is World Championship and he’ll be in both Kuusamo, Finland, and Lillehammer over the next two weekends to compete in the World Cup.

One place behind Musgrave was Norwegian Sjur Røthe in seventh (+37.2), who told FasterSkier that he felt “heavy during the start.” In a post-race interview with NRK, Røthe said he’s focused on the World Championships 50 k. He planned to skip Sunday’s sprint to recharge for the World Cup.

Petter Northug finished Friday’s race like it was a workout, and during the start of Saturday’s race, it appeared that he was on the path to a podium, but such was not the case. Northug led the race at the 1.2 and 2.1 k marks, but for the rest of the race, he was unable to maintain the same speed as the other top finishers and ended up 15th (+1:02.6). However, Northug didn’t seem to be affected by his fading speed, telling Dagbladet, “I am where I want to be. I’ve had two good workouts now and I’m confident that the job is done. I am excited for the important races that are approaching.”

But he did offer some explanation for what happened.

“I opened too hard and during the second lap I felt like it would be too much to maintain the tempo,” Northug told NRK.