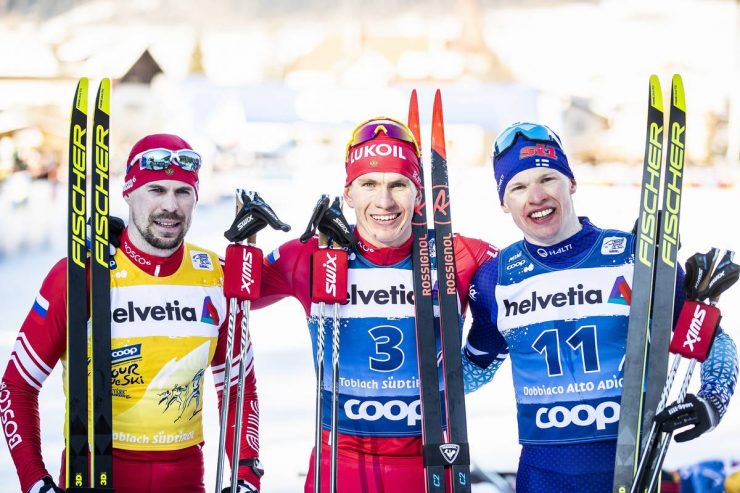 The hunter becomes the hunted. Looking back on previous tours, Russia’s Sergey Ustiugov has not worn the leader bib going into the pursuit stage except for the 2016/2017 tour in Oberstdorf, Germany. That year, Ustiugov won six of the seven stages, placing second in the mass start classic in Stage 6, but still raced up the final hill climb with a significant buffer for the overall victory.

This year, Ustiugov was the man to beat. After a dominant performance in yesterday’s 15-kilometer skate, the Russian began the 15 k classic in Toblach, Italy with a lead of 22.6 seconds before the next skier and 27 seconds in the overall standings. On the hunt were his teammates, Ivan Yakimushkin and Alexander Bolshunov, followed by a troop of athletes looking to earn back time on the leader. In particular, a host of Norwegians looking for redemption after the third stage. Would his gap be enough to hold his position over 15 k’s?

Within the first 4 k, the answer was evident. Bolshunov and 4th place starter Calle Halfvarsson of Sweden closed the gap and overtook the leader. The three men skied together through 8 k, then Bolshunov began to crack open a gap. 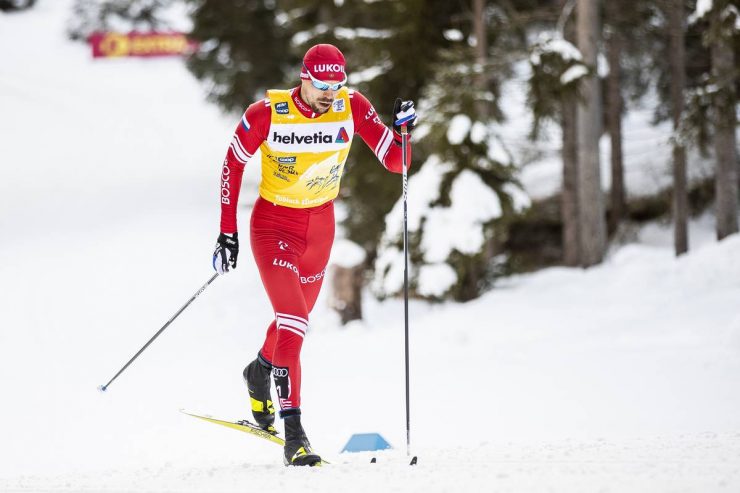 Sergey Ustiugov falls short in preserving his rights to the leader bib in Stage 4 of the 2019/2020 Tour de Ski. (Photo: NordicFocus)

Unable to match the pace, Ustiugov switched into damage control mode. Standings in the overall tour are based on the cumulative time from each stage, and the time added from today’s event is based on time of day results, meaning the elapsed time each individual spent on course. Being caught by Bolshunov meant Ustiugov had already lost 29 seconds, meaning that Bolshunov’s aggregate time now earned the 23-year-old the rights to the yellow bib.

Ustiugov was able to keep his teammate within 20 seconds, but Bolshunov never saw his position at risk and finished with a 13 second lead. He stopped the clock at 38:14.9 for his first stage win in the Tour de Ski. Subtracting this from his deficit in the overall, Bolshunov now leads the overall rankings by 16 seconds. 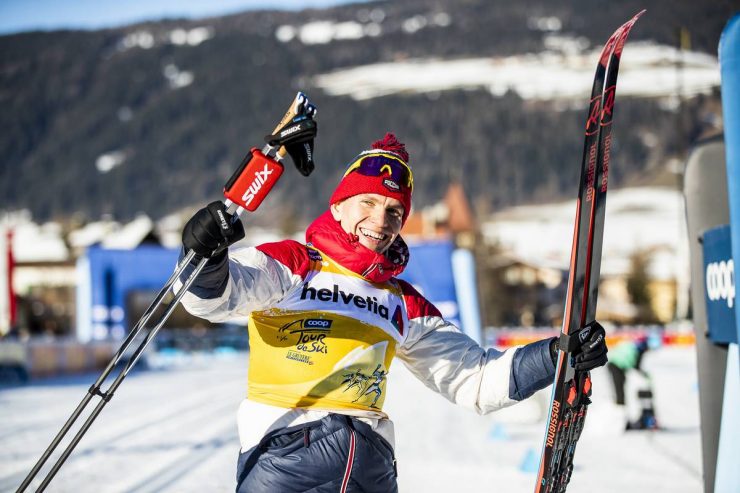 “It was a really, really hard race,” Bolshunov told FIS through a translator. “A big part of this was that I had to work alone. Sergey in the middle helped to keep the pace, by my own feelings started to run away and the last lap it was really hard to keep the speed.”

When asked whether he had energy left for the final three stages in Val di Fiemme, he answered with a mischievous smile. 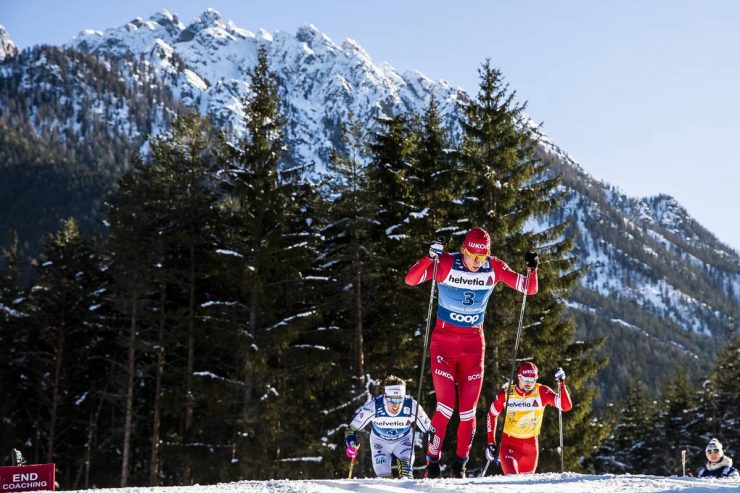 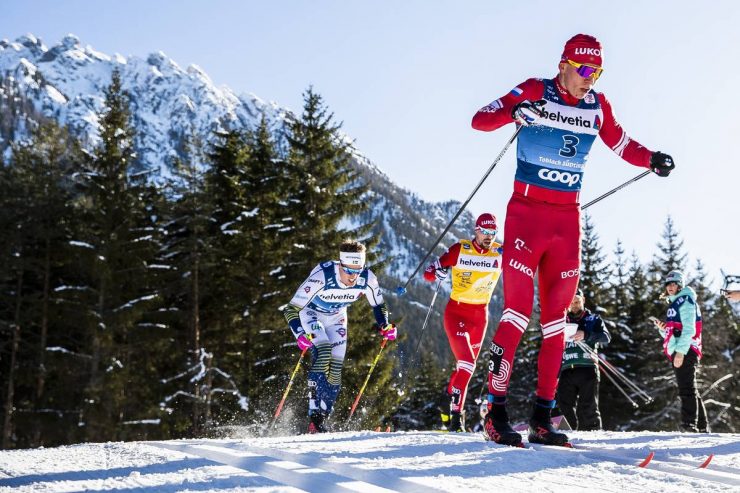 Alexander Bolshunov (RUS) blasts off as he leaves behind Calle Halfvarsson (SWE) and Sergey Ustiugov (RUS) during Stage 4 of the 2019/2020 Tour de Ski. (Photo: NordicFocus)

When Bolshunov began to pull away, Halfvarsson fell dramatically off the leaders, dropping from eight seconds back to over 50. Perhaps the Swede was paying for his effort in light of the cumulative tour fatigue that is setting in. He rebounded in the final lap to finish within 30 seconds of Bolshunov in 5th.

Steadily working his way up through the field in his dominant technique, Iivo Niskanen had an outstanding performance. The Finn began the race in 11th place with a deficit of 1:35, half of which he recouped in the first half. Like many other athletes, Niskanen began to fade in the middle part of the race, but he switched on his afterburners in the final lap. 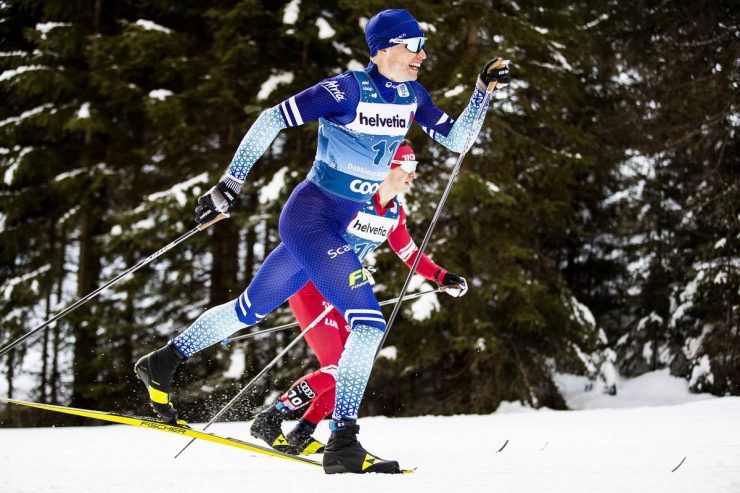 Iivo Niskanen rises up the ranks on his way to a third place finish in Stage 4 of the 2019/2020 Tour de Ski. (Photo: NordicFocus)

With 2.5 k to go, Niskanen was 50 seconds back on Bolshunov in sixth, yet he could be seen rounding the corner into the final stretch as Ustiugov slid over the line. Niskanen took the third spot on the podium finishing 24.8 seconds back on the leader, a result that moves him into fifth place in the overall standings.

So far this season, Niskanen won the 15 k classic in Ruka in addition to a 10 k classic early season opener. He is also an Olympic champion in the 50 k classic and podium finisher in the 15 k classic at the 2019 World Ski Championships in Seefeld, his stride and glide prowess is clear. Heading into two additional classic stages, he now sits in 5th place in the overall standings with a 1:10 deficit. 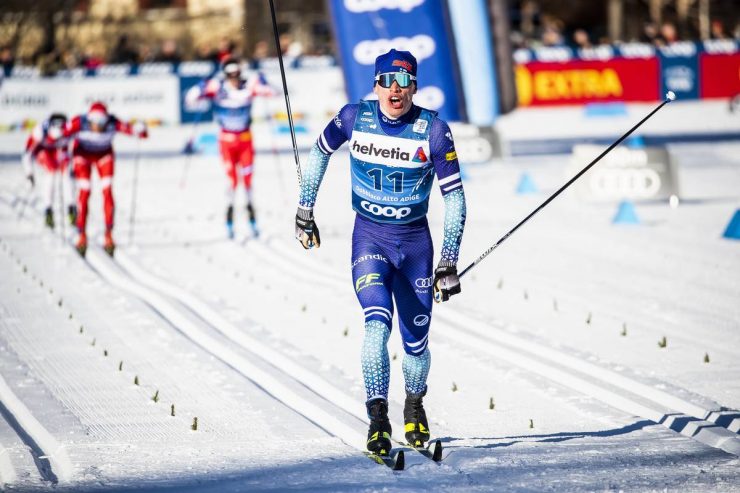 Desperate to whittle down his 37-second deficit in the overall ranks, Johannes Høsflot Klæbo looked like a workhorse in the pursuit. No pomp, just head down, focused, determination. He knew he was not fighting for a podium position on the day, but any time he could gain on the leaders would help keep him in contention for an overall win. It is essential that he keep his overall deficit within a margin that could be surpassed with bonus seconds he intends to garner in the sprint during Stage 6. 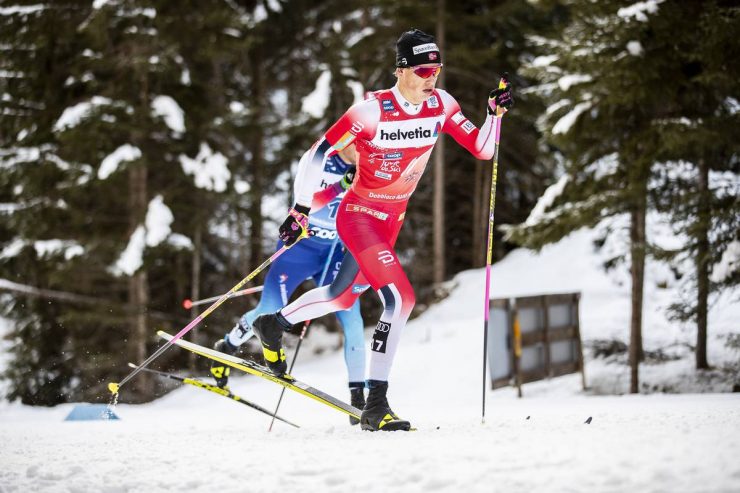 Johannes Høsflot Klæbo climbs his way into 10th during the 15 k classic pursuit in the 2019/2020 Tour de Ski. (Photo: NordicFocus)

As he gained time on Ustiugov, his deficit in the overall standings reduced to 26 seconds, though he still sits in third. Perhaps better suited for head to head competition, Klæbo is in good position heading into the next two stages.

In a post-race interview, Whitcomb shares that Bolger, who is a sprint-specialist, used the TdS distance stages as an opportunity to build fitness. He will now leave the tour to prepare for the city sprints in Dresden. Whitcomb also provided insight into Norris and Hanneman’s races, and offered a possible answer to the yo-yo like time difference seen in the race.