Tatyana McFadden making her way into the finish of the U.S. Adaptive Championships sit-ski sprint final on Monday at Soldier Hollow in Midway, Utah. In her third race, McFadden — an accomplished wheelchair racer — won a national title.

FasterSkier’s coverage of the 2013 US Cross Country Championships is brought to you through the generous support of The Memory Clinic in Bennington, Vt.

MIDWAY, Utah – Coming into the homestretch with a sizable lead in Monday’s sit-ski sprint final, Tatyana McFadden looked up to what seemed like an endless straightaway to the finish. A three-time Paralympian with 10 medals, the track star wasn’t sure she was going to make it.

Then McFadden flipped the switch, and almost as if she were wheelchair racing, she threw up her arms, heaved them down and repeated the motion at a higher tempo. In her third nordic race ever, the University of Illinois student claimed her first national title at the U.S. Adaptive Championships at Soldier Hollow.

If you had asked McFadden a week ago if she thought she could so, she couldn’t have told you. She hadn’t even been on snow for seven days leading up to nationals and hardly knew what nordic skiing was. She quickly caught the gist, and by the third straight day of races, she was a national champion.

Tatyana McFadden (l) and Beth Requist start together in the U.S. nationals sit-ski sprint final on Monday at Soldier Hollow.

“When I crossed the finish line I was so happy because I’ve only been skiing for about a week,” she said. “It was nerve-racking because it was just a sprint so it was going to be really, really quick, but it was fun. I really enjoy sprinting because it transitions from the track. I’m more of a sprinter.”

The fastest qualifier on the approximately 700-meter course in 2:51.1, McFadden and six other women proceeded to the final. There, McFadden started in the middle of the pack in the pursuit-style race, going head to head with Beth Requist, the winner of both preceding races (9- and 5-kilometer distance races).

By the halfway point, McFadden had blown open the race. She went on to beat Requist of the National Sports Center for the Disabled (NSCD) and Kristy Vaughn (U.S. Paralympics Development Team), who were respectively second and third.

“I didn’t know if I was gonna finish,” McFadden said. “It was exhausting. I was like, ‘OK, the last few meters I can do this!’ But it was fun. I guess it was a new experience.”

U.S. Paralympics High Performance Director John Farra wasn’t surprised she took her first title in the sprint. She had been second the two days before.

McFadden said she was gradually getting more comfortable with the sport.

“I’m getting used to turning and balancing and knowing how to take corners and more of the techniques,” she said, “and how to use the sunlight to get on tracks and just different terms I had never heard before. … The team’s great, like, I love the girls and the guys. It’s a good transition when you have the support behind it.”

Dan Cnossen (U.S. Paralympics/Navy SEAL) goes hard off the line in the sit-ski sprint semifinal at U.S. Adaptive Championships in Soldier Hollow. He won the qualifier and ultimately the final.

With two 2013 national titles behind him, Cnossen went on to qualify in third in his semifinal after an early crash, then won his final by several seconds. Andy Soule (U.S. Paralympics/Army) ultimately placed second and Halsted edged Jeremy Wagner (U.S. Paralympics/NSCD) for third.

“I knew it was going to be more dynamic with the sprint and I, based on the factoring system, start a little later,” Cnossen said of the system, which puts him as an athlete with a greater range of motion than others, further back in the pursuit.

Qualifying results are scored separately for International Paralympic Committee (IPC) points and do not determine athlete order. The top qualifying time is instead plugged into a formula that determines how to space athletes depending on their injuries. Theoretically, the last starter should be able to catch the first – and that’s where the racing comes in.

“Coming into the turn on my [semifinal] heat I got tied up with a guy and fell down,” Cnossen said. “That can happen so I knew I needed to really go out hard out of the gate [in the final] and try to get to that turn in good position because on the downhill, it’s hard to gain time. So I wanted to go out really hard off the bat today.”

Racing with five others was a first for Cnossen, a World Cup skier who said he was getting used to the new IPC rule. Farra explained that U.S. Paralympics actually proposed the change from four racers to six per heat.

“We just thought it was silly in part because I know there’s a lot of equipment and all that, [but] I don’t know why they were doing four because you stagger them they’re not even on the start line [together],” Farra said. “You don’t even need six lanes, you only need three or four. … This is just a better format. Way more fun.”

In less than a week, Cnossen and a few other top adaptive athletes, including standing and visually impaired, will jet over to Cable, Wis., for the IPC World Cup. The first race kicks off Sunday, and Cnossen will by flying out Thursday – after the U.S. nationals biathlon race on Wednesday.

“It’s good to come out here and race and be amongst other teammates and push each other,” Cnossen said. “Now that it’s kind of winding down, I’m looking forward to the next bigger challenge, which we have the Euros to go against next week.”

One athlete who put herself to the test, Muffy Davis, a Salt Lake City-based Paralympic handcyclist and former alpine mono skier, entered her first set of nordic races Sunday and Monday.

“I signed up for the nordic nationals simply for the fun and experience and to help me motivate to get training for my next season,” Davis, a three-time gold medalist in London, wrote in an email. “These were my first races, and they were fun. Obviously, I have a lot to learn about racing, but I love skiing for the fabulous workout!” 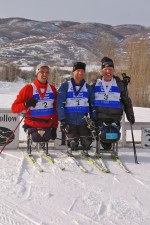 Frazier holds him off for fifth.

Frazier (r) checks back to see where Pike is just before the finish.

The rest of the men’s final

Frazier first to go in the men’s final. 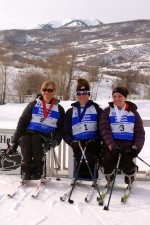 Requist follows McFadden into the homestretch for second in the sprint final.

Tatyana McFadden making her way into the finish of the U.S. Adaptive Championships sit-ski sprint final on Monday at Soldier Hollow in Midway, Utah. In her third race, McFadden — an accomplished wheelchair racer — won a national title.

Tatyana McFadden (l) and Beth Requist next off the line.

Followed by Pike (l) and Dodson

Soule checks back to see the competition.

John Davis second off the line in the second semifinal.

The rest of the semifinal waits to start.

Frazier (r) and Cnossen follow to advance to the final in second and third.

Dan Cnossen (U.S. Paralympics/Navy SEAL) goes hard off the line in the sit-ski sprint semifinal at U.S. Adaptive Championships in Soldier Hollow. He won the qualifier and ultimately the final.

David Poole first to go in the men’s sprint semifinal

Christy Campbell starts things off in the women’s sprint qualifier.

Dan Cnossen kicks off the men’s sprint qualifier on Monday at Soldier Hollow.