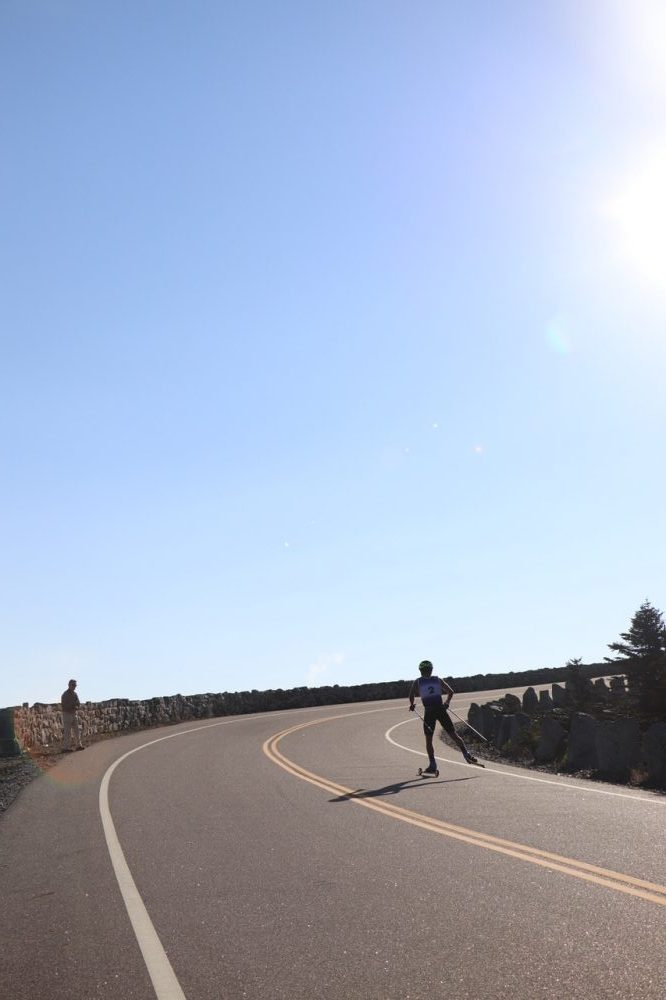 On a humid fall Sunday in northern New York where temperatures reached an uncharacteristic 80 degrees, Jake Brown of the Craftsbury Green Racing Project and US Biathlon Development Team and Tara Geraghty-Moats of USA Nordic won the 2018 Climb to the Castle.

On the men’s side, Brown’s Craftsbury teammate Raleigh Goessling finished second in 38:16.6, and Erikson Moore of the Fondeurs-Laurentides team in Quebec was third in 39:00.3.

Among women, Jackie Garso of Saint Lawrence University was second, in 49:24.1, and Nakkertok’s Zoe Williams third in 49:40.6.

This year was a high water mark for attendance, with 102 athletes finishing. 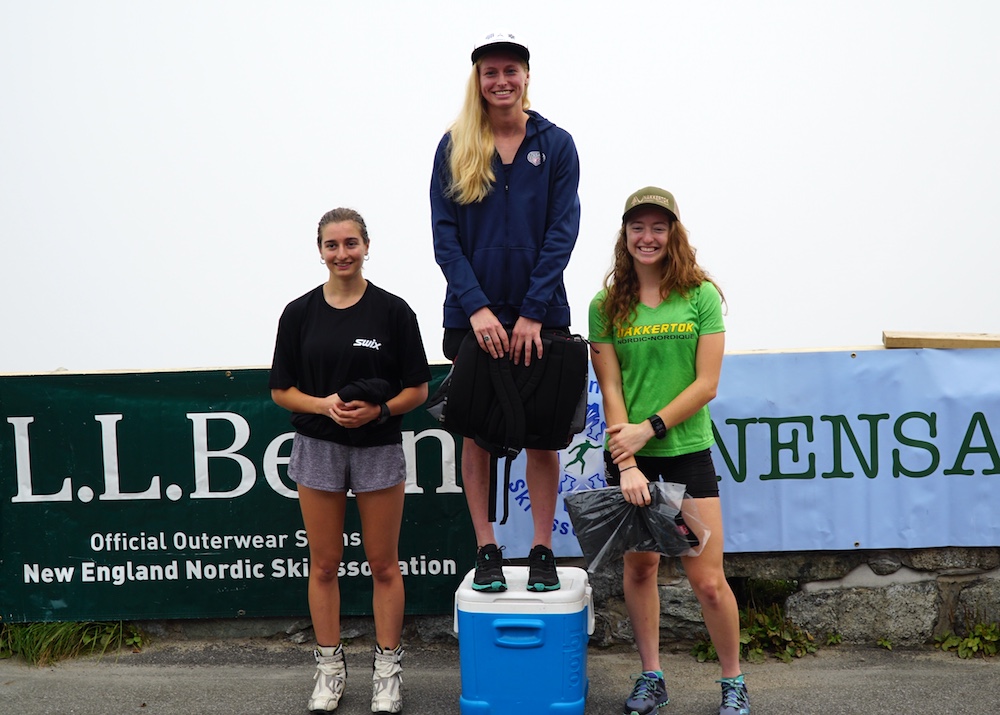 The overall women’s podium at the 2018 Climb to the Castle at the top of Whiteface on Sept. 15 in Wilmington, N.Y., with winner Tara Geraghty-Moats (c) of USA Nordic, Jackie Garso (l) of St. Lawrence University in second, and Zoe Williams (r) of Nakkertok in third. (Photo: Colin Delaney)

While a few degrees cooler than last year, dank humidity settled like a blanket over the five-mile climb, with athletes moving through a couple of patches of dense fog on the higher reaches of the mountain.

“It was a hard one today,” Brown said following the race. “Last year, I felt like I went a little too hard off the line, and kind of buried myself early. So I wanted to be a little more conservative and finish strong today. I tried doing that and it felt a lot better, and I skied a little faster. I was on different rollerskis, so it’s hard to be able to compare it to last year. I was happy with my effort and it was a good push today.”

“It’s always a tough race, but I’m happy with how my summer training has paid off,” Geraghty-Moats said. “I felt strong and I had a good race.”

Asked if the race was part of her training plan, she replied, “I just finished competing in the Ski Jumping Grand Prix in Russia, so I’m still pretty jet-lagged. I love this race, NYSEF puts a lot of energy into putting it on every year, so I figured I’d make the trip over. It’s really fun and I enjoy racing with a good crew.”

A ski jumper winning a cross-country ski competition? For those not in the know, Geraghty-Moats is one of the pioneers of the developing women’s nordic combined. 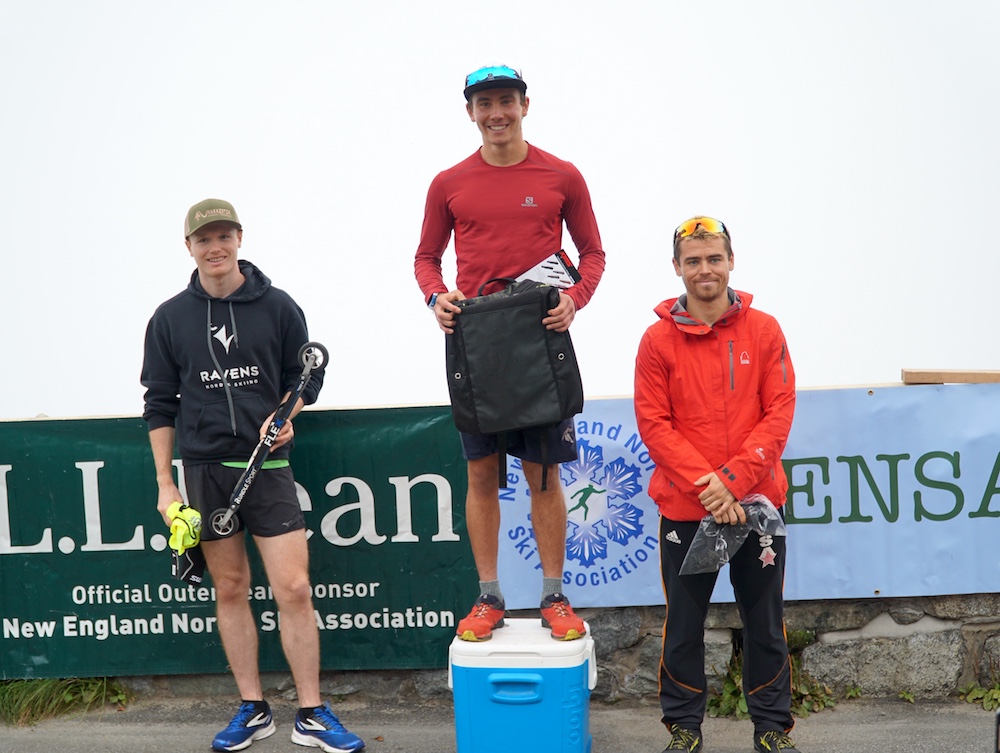 The overall men’s podium at the 2018 Climb to the Castle at the top of Whiteface on Sept. 15 in Wilmington, N.Y., with winner Jake Brown (c) of the Craftsbury Green Racing Project (CGRP)/USBA Development Team in first, Raleigh Goessling (r) of the CGRP in second, and Erikson Moore (l) of Fondeurs-Laurentides in third. (Photo: Colin Delaney)

“I’m on the women’s ski jumping team and I’ve been to a World Championship in 2015 and on the World Cup team for the past 4 years,” she explained. “Before that, I was a biathlete, so nordic combined was sort of a natural step for me. FIS has put in a lot of resources to developing women’s nordic combined. This year, they’ll have a Continental Cup circuit; next year, there’ll be a World Cup circuit; and the following year after that, there’ll be a World Championship. I’m starting to learn how to compete in nordic combined and I’m really enjoying it.”

Zoe Williams, along about 60 other athletes, had participated in the previous day’s Doubleday events at the Intervale Ski Jump. (for more on the Doubleday, keep reading!)

“I felt a bit tired in my warmup,” Williams said. “By the time I got to the start line and the race started, I didn’t feel as bad as I could have. My legs for sure felt tired in the first kilometer, but after the first k, I started settling into that rhythm and I ended up feeling pretty good for the rest of the race. Climb to the Castle, you just have to find that gear and grind away.”

In 2017 she was fourth overall, five seconds behind biathlete Deedra Irwin. 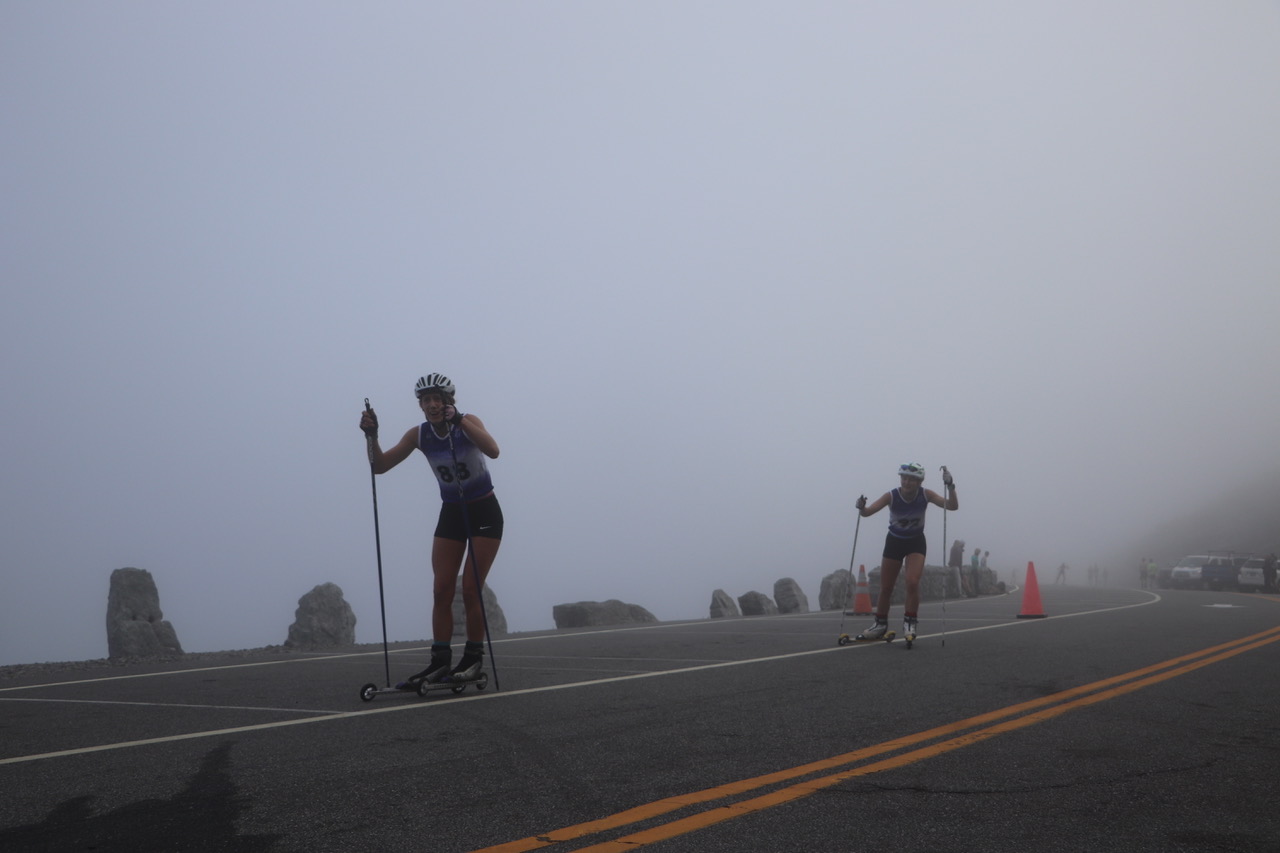 “This year, I ended up leading the group that I was with, which was kind of a fun change,” Williams said. “But the whole time I was thinking ‘what did Deedra do here? We one-skated [V2’ed] here. I can one-skate here!’”

Asked if Climb to the Castle was a good fitness benchmark, Williams said, “Because the next couple of months are where you start getting the really high intensity zone four, this is a really  good indicator of the base level fitness that you have, because of the endurance focus of the race.  But I’m for sure looking to find my top end gear in the next couple of months.”

Full Climb to the Castle Results

Doubleday Takes Off: New Events Added to the Climb to the Castle weekend

On Saturday, the New England Nordic Ski Association (NENSA) and the New York Ski Education Foundation (NYSEF) collaborated on a new event held on the rollerski loop at the Intervale Ski jumps. 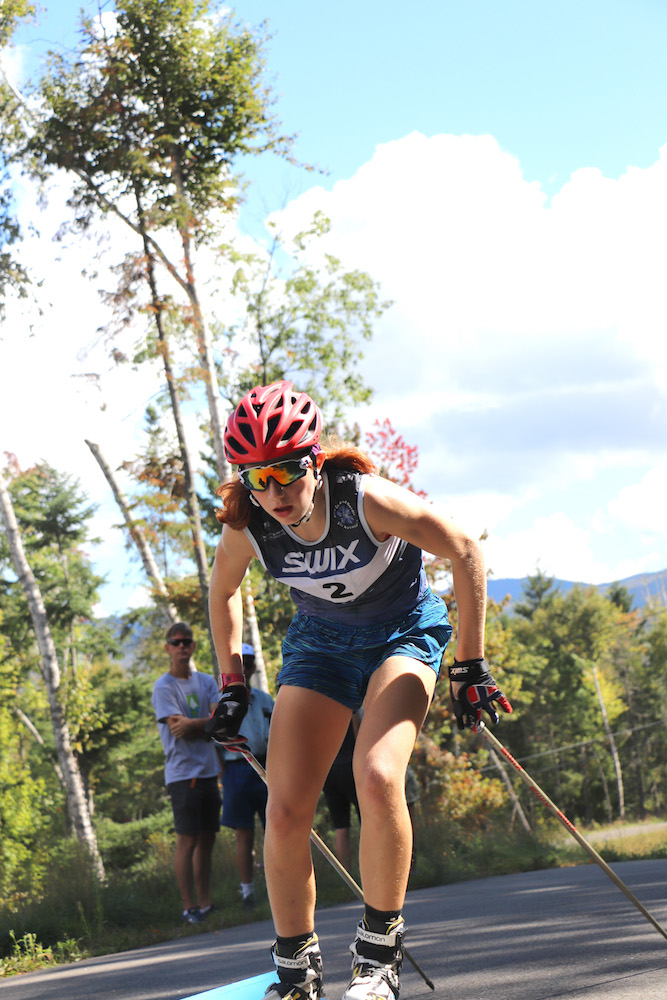 The Lake Placid Doubleday started with a three-kilometer prologue; after a break, there was a 1.5 kilometer sprint time trial. The results of the two races were aggregated to determine winners.

Nicholas Clifford of Carleton University in Ottawa, Ontario, was the open men’s winner, while Nakkertok’s Williams was the open women’s winner before going on to be the runner-up in the Climb to the Castle.

“We’ve had the  Climb to the Castle for 11 years, and this year we wanted to expand it to a full weekend,” NYSEF head coach Shane McDowell said. “We started talking with Justin [Beckwith, NENSA Competitive Program Director] ] in the spring and he proposed the idea of trying [NENSA’s] new format of the doubleday, which will be used at the Eastern Cup scheduled for 23 February at the Dublin School.”

“The format came out of discussions this spring,” Beckwith said. “Three kilometers is a national junior relay distance and we were valuing shorter, sprinting efforts in the results because we were usually a little heavy on the distance qualifications for our Junior National team in New England. When partnering with Shane and ORDA [the Olympic Regional Development Authority] to make it a reality, for us to test out the event which has a physiological effect of doing the 3k prologue in the morning and do a prelim in the sprint, the 1.5, would be the timing of a typical quarter final.”

The roller ski loop at Intervale is serpentine and narrow, with fast downhills. In the pre-race meeting, Beckwith admonished the athletes to be conservative as they warmed up. As they warmed up, the rollerskiers gradually became more aggressive in their approach to the course. 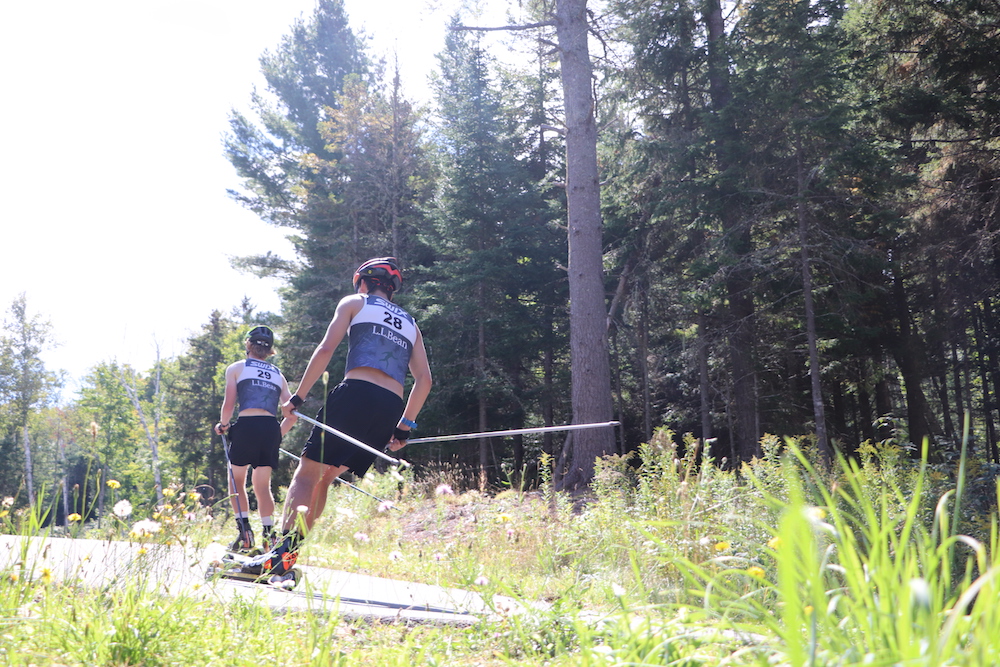 The race started and finished at the biathlon range located midway through the long climb from the lowest to the highest sections of the course.

Clifford is the coach of the Carleton University ski team, located in Ottawa, Ontario.

“It was really exciting,” he said. “It was the first time I’ve skied at [Intervale]. I’ve heard a lot about some of the sketchier downhills but it was actually really well done. It was just like ski racing.”

Asked how he planned his races, Clifford said, “Not so much. I’m not a shorter distance guy, so the Climb to the Castle tomorrow is the real show and this was just a bit of a tuneup to get some speed in the legs.”

Of the Doubleday format, the consensus was that it was tough.

“The course here… It’s pretty much straight up and then you go down and come back up,” CSU’s Alex Burt said. “For the 3 k, you do it twice. It’s a lot more brutal. I had to actually pace it. For the1.5 k, my strategy was to go out as hard as I can and just keep it up.”

But it was also fun, many participants agreed. 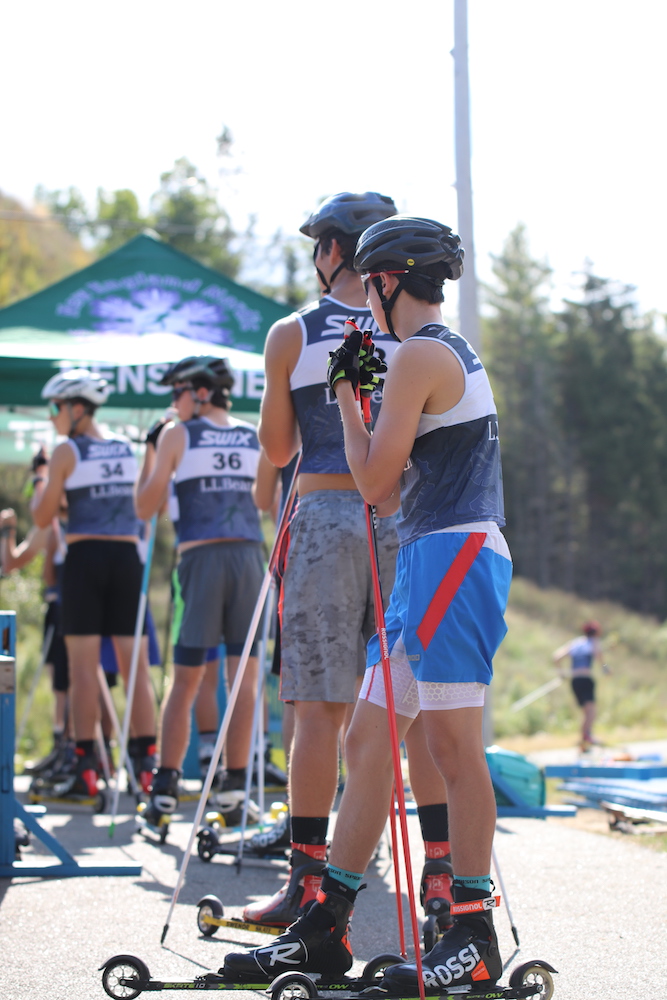 Racers lined up at the start for a Doubleday competition. (Photo: Heloise Rolland)

“It was fun,” said Williams of the Doubleday. “The course here was super awesome, because it was like actually skiing, whereas a lot of roller ski races are on roads. It’s so twisty and turns up and down, it’s a lot like actually ski racing.”

On getting used to the downhills, Williams said, “It took me through mid warm up, to get used to the corners. In the race itself, I didn’t even think about it. It was super nice. I worried about it in the warmup, because there are some really gnarly corners, but when you’re racing, all your focus is on going fast.”

Amy Duclos of Saint Michael’s College in Burlington VT, was the third overall female finisher at the Doubleday.

“I wasn’t really sure about the course going into it, because of the turns, the hills, but it was a lot of fun,” she said. “I thought today was a good warmup to get the legs moving for tomorrow. It’s definitely a different type of race.”

Laura Appleby, of Cambridge Sports Union (CSU), won the junior women’s division at Doubleday and was the fifth junior woman finisher at Climb to the Castle.

“They went really well,” she said of the Doubleday races. “It was super fun. I liked the downhills… The first race was a little bit longer, so I was definitely pacing it a little bit slower. But generally just go out and ski the course, ski the transitions.”

Shilo Rousseau, Chandra Rousseau, and Zoe Pekos, all of Barrie [Ontario] Cross-Country, sat for an interview in a downtown Lake Placid coffee shop following the Doubleday.

“It was a little scary at first with the safety meeting,” said Shilo, who finished third junior woman both at the Doubleday and C2C. “After skiing the lap a few times, you realize it’s not that bad.  As you go on, your laps get faster. You really have commit on roller skis.”

Did she save energy for the C2C?

“Full send every day,” Shilo replied. “I’m not leaving anything in the tank.”

Chandra Rousseau said, “The last downhill was bad. The prologue wasn’t as good as I wanted it to be.  I probably could have pushed a little harder on the downhills. On the sprint, I was more used to the course.”

Recovering in a bench outside the Castle, a reporter asked the Rousseaus and Pekos, so, did you go full send?

In unison, they replied, “Full send!”