CANMORE, Alberta — Canadian Nationals went to Canmore for 2017 and Canmore delivered. Famous for challenging courses, well-trained volunteers, and erratic weather; the Canmore Nordic Centre showed all three at their best during the eight-day event.

Each day delivered warm sun, cold winds, snow flurries, and warm winds (often all occurring in a single race lap) to more than 600 racers. The first races each morning were held on fast, transformed snow that transitioned to slow and soft in the afternoon. While 30 of Canada’s top skiers missed the first two days of racing, with a new relay cross event and freestyle interval starts, while competing at World Cup Finals in Quebec City, the real action was in the younger categories with more than 100 racers in each.

On Tuesday, March 21, most of the World Cup Finals racers arrived in time to compete in the 10/15 k classic interval starts, with Devon Kershaw and Emily Nishikawa recovering to take the open-category gold medals.

The next day, Emily Nishikawa took her second-straight title in the classic sprint, despite being visibly tired in her fifth race in six days. All six women in the A-final had completed in Quebec three days earlier. While the three medalists were posing for a photo, one was overheard saying, ‘We have two days off!’

In the men’s A-final, Madlener took the overall victory ahead of his University of Denver teammate Dag Frode Trollebø. Evan Palmer-Charrette placed third overall, and as the top Canadian, he earned the national title.

Thursday held classic sprints for the younger categories and Friday was a rest day for the volunteers.

(See also: the race analysis link for each day. Want to know who was climbing fastest? Descending fastest? Slowest? Won the climbing prime? It is all here for the distance day.)

On the importance of nationals

“When I was a juvenile, I just had learned so much meeting the national team skiers, seeing them ski around, see what they do for warmups, how they race. … So I just want to be here for the next generation and be able to meet anyone who wants to say hi.” — Emily Nishikawa (Canadian World Cup Team)

“We had 110 girls at the Fast and Female event yesterday. It was really amazing to see so many girls out there. I hope that everyone’s enjoying their nationals and gets some inspiration from watching myself, and Emily, and Graeme, and everyone else who’s been racing overseas race. Especially, too, some of those juniors who had the opportunity to do the World Cups in Quebec. For everyone else in Canada to be able to race them and see where they end up and have that as a marker is really exciting.” — Dahria Beatty (AWCA/National U25 Team)

“We use these as training races, we need to stay competitive with the best in the country, and that’s what we’re here to do.” — Graham Nishikawa (Canadian Para-Nordic Ski Team guide for Brian McKeever)

On winning a national championship

“It’s my fifth race in six days, so I’m really tired, but I couldn’t be happier right now. To win two back-to-back national titles yesterday and today is really cool.” — Emily Nishikawa, after the sprint

“It was a tough end to the season, but nice to finish on a positive note here. It is incredible to win all three.” — Emily Nishikawa, after two rest days

“Awesome to be Canadian champion, surprise for sure in a classic sprint for me. Definitely not quite the Canadian field you’d see at a lot of Canadian nationals, a lot of guys sick and injured after World Cups on the weekend, but awesome nonetheless.” — Evan Palmer-Charrette (NTDC Thunder Bay)

“I’ve never won the 50 before. I’ve have medals in the other races … I’m super happy to get a 50 k win, that’s something that’s been a big goal of mine. I didn’t feel so good coming into this week, so I’m just really happy that it worked out today.” — Killick (World Cup Team)

“It feels great. Super good race for me on Sunday [March 19] and I’ve had a great week overall.” — Graham Nishikawa

“I wouldn’t say I’m a sprinter, but today with these soft, slushy conditions, it kind of played into my favour. I love classic sprinting, I always have.” — Emily Nishikawa, after winning the sprint

“I had a good tactic for the final downhill, I found some faster snow outside the track. I did a little slingshot off Dahria. She’s usually so good at tactics, I was thinking, ‘What would Dahria do today?’ and did what she would normally do.” — Emily Nishikawa, after the sprint

“The prologue was really tough. We had a very tough race yesterday, so the prologue was just getting through it. And then I recovered better than I thought, it got better from each heat to the next.” — Moritz Madlener (University of Denver), after winning the men’s sprint A-final

“The prologue was very tough. I had a good one, but it was definitely easier in the semifinal. Actually, at the end of the final it was more of a distance race than a sprint race. I think people were hurting a lot, there were very tough conditions, we had sugar snow up our legs, and I was just trying to get up the hill as fast as possible.” — Dag Frode Trollebø (University of Denver), who placed second overall in the sprint A-final

“I tucked in behind the two guys from Denver. I knew they were going to put in a surge on the climb. I went inside to try and go past them, but they were smart, took the two outside tracks which were still there, inside was really soft. I cut over to get behind them, but I lost a couple metres and just wasn’t able to get that back.” — Palmer-Charrette, after placing third overall in the sprint, first Canadian

“I double poled the qualification, it was a good decision for me, I ended up ninth. Very good quali for me. I just can’t describe the heats, it was so perfect for me today. It was perfection, from the start to the end.” — Antoine Briand (CNEPH), after placing fourth overall in the sprint, second Canadian

“Canmore is one of the toughest places to race. The hills are relentless and it suits my skiing. I attacked on the wall of the last lap, which is the toughest part of the course. I was trying to save some energy before that. I just went for it, and didn’t look back.” — Emily Nishikawa

“Emily won in the end going up the wall. She put on a hard sprint, and I, well, I haven’t really been training [laughs]. My legs seized halfway up and I was like, OK, let’s just get to the finish line.” — Zina Kocher (former Biathlon Canada national team member), after placing second to Nishikawa in the 30 k freestyle mass start

“Six [races] in eight, nine days. I’m pretty tired, I had no idea how my legs would react to the race, but I allowed myself to surprise myself, and better than I thought. The legs were good.” — Frédérique Vézina (CNEPH), after placing third in the 30 k

“Probably shouldn’t have started. I went hard off the start, tried to stay with the group, and was absolutely exhausted today. I was already dropped off the pack by the sprint prime, so I tried to go for it. After that, I just skied out the course, I wasn’t really racing anymore, I didn’t have anything left. I just tried to finish it, it’s never fun to drop out at the end of the season, so I thought it was worth skiing it out. It’s a nice day at least to ski, so many people cheering me on.” — Beatty, who placed 12th overall in the 30 k freestyle, and second in the “Queen of the Wall” climbing prime, behind Sophie Carrier-Laforte

“I don’t think I’ve ever beaten Andy [Shields] in a sprint. He’s got some speed. I knew it was my only shot, I tried attacking a couple of times and never really had the energy to go away with it, so I just decided to sit in and see what happened. Luckily, Shields had a good attack on the last climb there [pointing] and I was able to, he pulled us away from third place. It was just between us on the finish. I wasn’t counting on myself in the sprint, for sure.” — Killick, after outlasting Shields for the 50 k win

“Graeme, he’s got some good chops [in sprinting]. That’s not the first time he’s outsprinted me to the end. He had the jump on me with the draft, and his skis were a little quicker than mine as well. I’m happy to be on the podium, would have been nice to get the win, but G-Kill had the tactics and he had the jam to stay with it when I pushed it on the last two climbs. He skied the tactics a little better than I did, I guess, and got the win.” — Andy Shields (Lappe Nordic), after placing second in 50 k freestyle 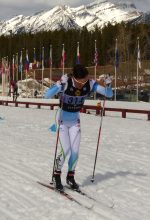 Emily Nishikawa leads the pack out of the start in the women’s 30 k freestyle mass start (Photo: Peggy Hung)

Graeme Killick with the big prize. (It isn’t enough to have the strength to win a 50 k. You have to be able to lift the trophy at the end!) (Photo: Peggy Hung)

After six races in nine days, Jess Cockney is pressed into service to keep the prizes from blowing away. (Photo: Peggy Hung) 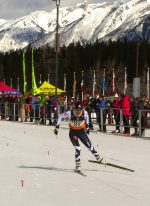 The eventual podium finishers on lap two of the men’s 50 k freestyle, with Graeme Killick (1), Andy Shields (2), Michael Somppi (3), who went on to finish in that order. (Photo: Peggy Hung) 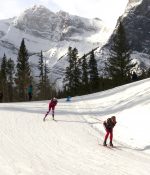 In contention for the junior men’s classic sprint title, AWCA’s Michael MacIsaac-Jones’s (second from left) crashed just before the finish of the A-final. (Photo: Peggy Hung)

Young skiers came from all over the country to represent their clubs and test their progress. Whitehorse’s Natalie Hynes is following the tracks of Emily Nishikawa and Dahria Beatty. (Photo: W. James MacLean) 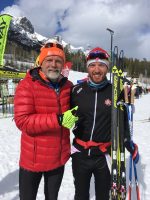 Nationals is a club event. In the 50 k, the first and last finishers were both Ptarmigan Nordic members. Phil Meagher and Graeme Killick are all smiles afterwards (Photo: Gerry Furseth)