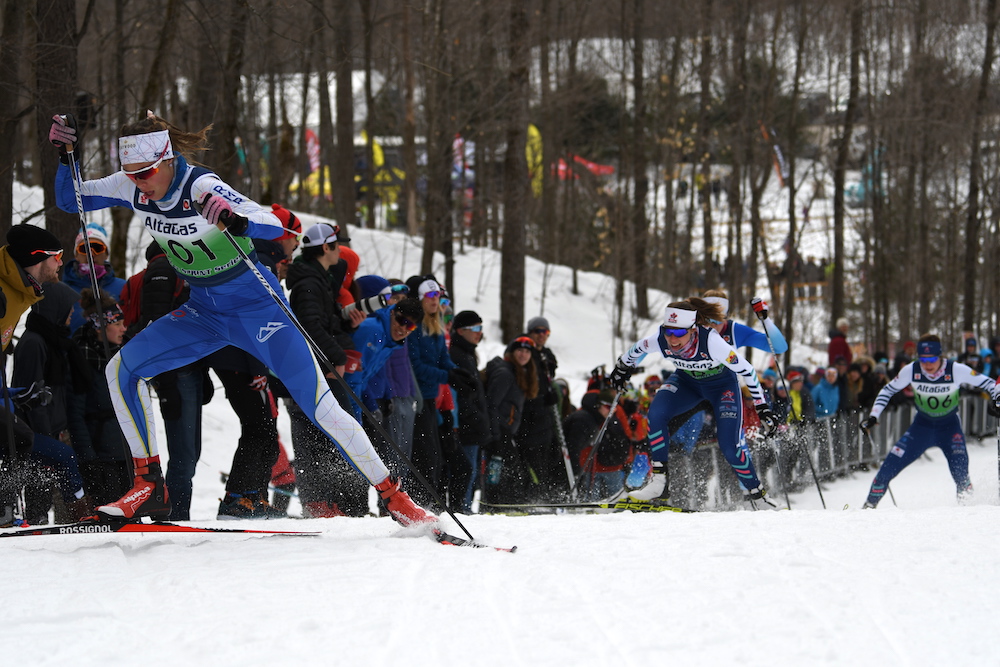 This article has been updated with final WCF selections and a video of the sprint A finals.

Nationals rolled on at Nakkertok trails with free technique sprints on Saturday. The women raced a 1.3km course while the men added one more hill for 1.4km.  The jury described the conditions as ‘soft icy’, which seems to mean ‘fast spring skiing’ with a soft layer over a firm base.

Maya MacIsaac-Jones (CNST) took her second consecutive national sprint title by jumping clear on the final climb to earn a solo victory in 2:46.62. Dahria Beatty (CNST) led the pack into the finish 2.87 seconds later with Katherine Stewart-Jones (CNST) at 3.27 seconds and Cendrine Browne (CNST) at 3.47.

Germany’s Julia Richter took fifth for the University of Utah at 4.82 followed by Annika Richardson (NTDC TBay) at 5.31.

“Going into the final,” MacIsaac-Jones wrote, “I knew that my offset was strong so I made the decision to attack on the final climb, which worked out as planned!” 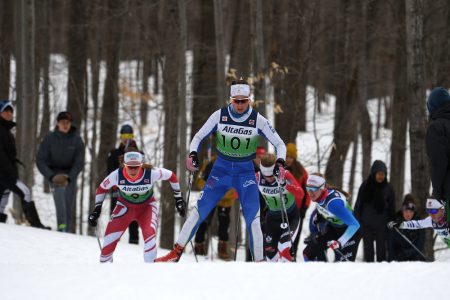 MacIsaac-Jones is ending her nationals on a high, as she makes a planned shift to focus on World Cup finals next Friday. “I’m so happy with my race today, this is the best I’ve felt all year. It’s been a rocky season, and this is really motivating for me going into next year.”

The conditions made for fast racing, but the A final was different.

“It went out pretty slow,” Stewart-Jones wrote, “because no one wanted to lead on the first climb because there was significant draft on the next downhill.”

Browne, who is usually described as a distance specialist, now has 4th in every event at nationals.

“My qualifier was not so great, so I didn’t know what to expect in the heats,” Browne told the LOC. “Fortunately, I felt really good in the heats and I managed to squeeze myself up to fourth place today. Really happy with that, usually not a sprinter, so yeah, good day for me.” 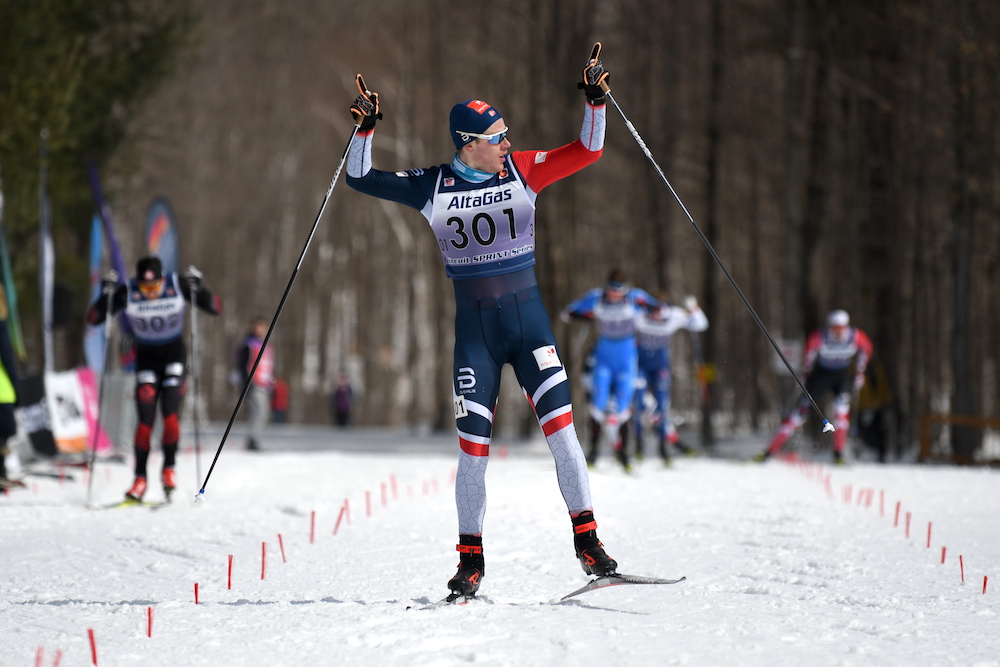 In the men’s A final, the Norwegian theme from today’s World Cup sprint in Falun flowed into Canada. Norwegian national team junior Håkon Skaanes (Strindheim IL) won the qualification and all his heats to take the A final in 2:45.69.

Briand, who qualified second 1.05 behind Skaanes, was happy with his first Canadian title.

“Today’s race, I’ve been thinking about it for the past eight, nine months,” he told the LOC. “I was really strong today, from the start of the day, qualification this morning and every heat I was feeling good.”

Briand didn’t wait for others to set the stage.

“In the final, I went really hard in the first uphill,” Briand wrote. “My coach shouted on me that the gap had opened. So me and the Norwegian guy who won kept going hard until the end. I couldn’t follow him the second time we went up but I managed to stay 2nd.” 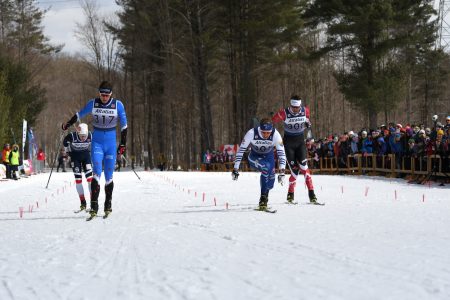 “For me,” Smith wrote in an email, “I was really confident in my skis so I was trying to settle into 3rd place going into the first downhill, and then move into second during the second climb. This allowed for drafting on the final descent. … I did let one too many people between me and the finish line on the last climb and then was not quite able to close the gap in the end.”

This nationals is not just the largest in recent memory, but also one of the most competitive. Unusually, there are only two Canadians on the World Cup circuit in Falun, with everyone else here in Nakkertok. The addition of the Norwegian juniors and NCAA athletes added speed to the mix.

“I have never been to a Canadian National Ski Championships where the field is so deep, with National Team members, competitive domestic racers and so many international racers,” Smith wrote.

Racing continues Sunday with sprints for the younger age groups and an invitational for even younger athletes. Sunday has 507 racers on the start list compared to 194 finishers and 12 DNS on Saturday.

Twelve athletes have already qualified, leaving seventeen spots to be decided at nationals: 8 men and 9 women.

The criteria was summarized after the pursuit race. The races that count are the sprint, the individual start classic, the pursuit, and pursuit time-of-day.

What follows is an interpretation of the criteria. CCC will announce the definitive list Sunday night at La Soirée, along with the new CCC branding. 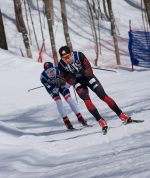 Antoine Briand and Håken Skaanes with an early lead in the A final. (Photo: Rob Smith)

Maya MacIsaac-Jones leading early in the the A final. (Photo: Rob Smith)