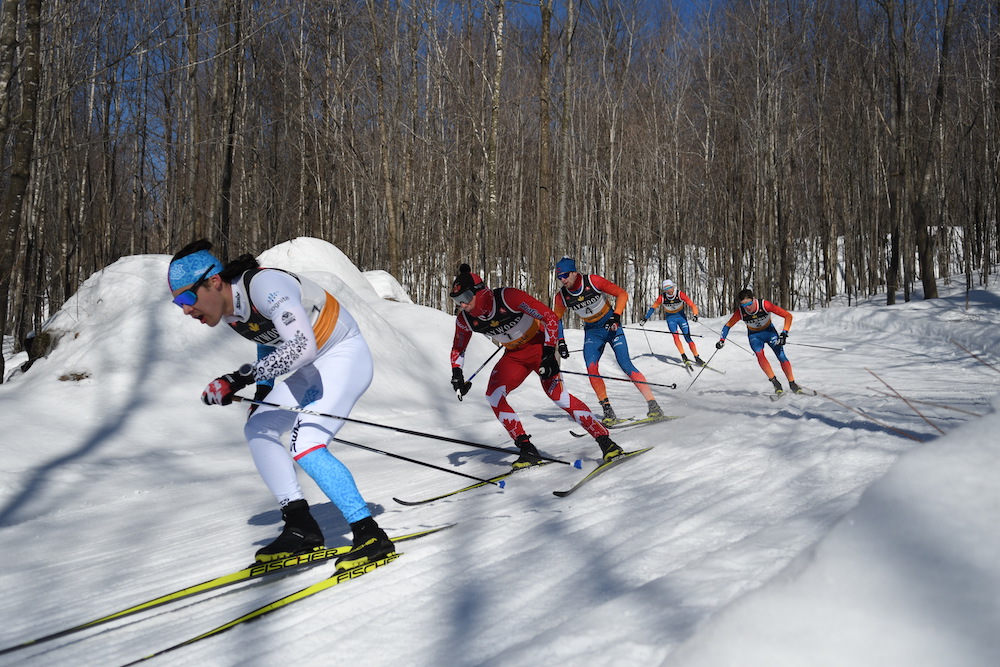 The Canadian Ski Championships party at Nakkertok trails in Gatineau, Québec is in the final days. While ski fans might see this as a pre-party for World Cup Finals in Québec City, the athletes are pursuing titles, personal goals, and the chance to test themselves against 700 peers.

FasterSkier, like the World Cup athletes, is not immune to travel challenges. There will be a few quotes from Tuesday’s mass starts, the result 0f flight cancellations and slow airport internet caused by spring break crowds. This article was written at YLW, YEG, and YYZ airports. 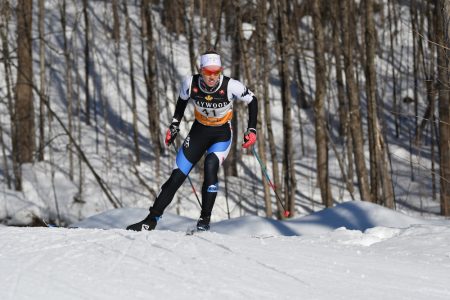 Monday was team sprint day. While some of the WCF-bound athletes had already left, a number of them decided the team sprint was the ideal tune-up for Friday’s sprint. While medals are awarded, many of the top athletes are more focused on the team-bonding experience and a chance to represent the clubs that got them started.

The women race the 2x2x1.3km format. Two skiers, two laps each on hard snow at -1C in sunshine.

Williams was happy with her day, writing “Hannah Shields (my teammate who skied the first leg of the team sprint) raced beautifully. She skied with the lead pack on the first lap which kept things chill and then handed off with a solid lead after the second exchange. All I had to do was put my head down and hammer!!”

Williams, who won the team sprint at 2018 nationals as well, had decided in advance that she would focus on this race, whether or not she qualified for WCF.

“I love team sprinting,” Williams wrote. “There is nothing better than going out and racing with a teammate you’ve trained with all year!! And, then, to both throw down and end up on top of the podium together, not only together but also with two of our other teammates who won bronze — so exciting!!” 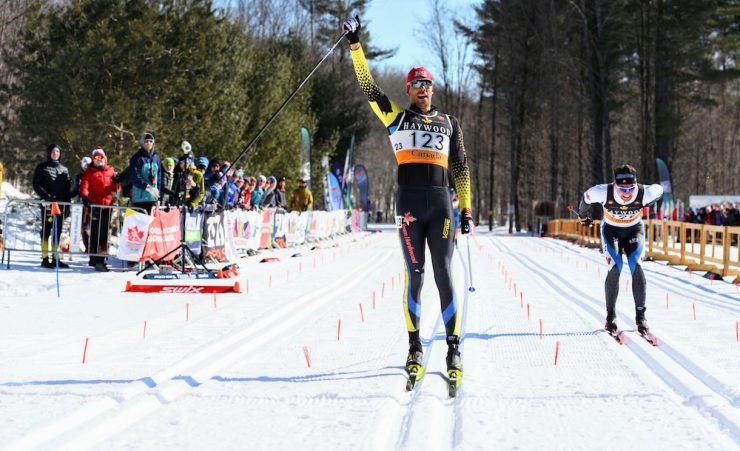 Thompson and Ritchie set the tone with an aggressive plan.

“Our plan for the final was to stay within the top three for the whole race and then see what we could do on our last laps,” Ritchie wrote. “We did exactly this and Malcolm had an amazing last climb on his last lap that put us into the lead going into my last lap! I tried to hold off Lenny as long as I could but he ended up catching me, can’t complain about that though, haha! We were super happy with the outcome!”

This was Valjas’ last race at nationals and it is no surprise that he went out in style. Teammate Thompson put it best.

“We stayed in the top three for the whole race with some surges to the front to stay out of tight situations,” Thompson wrote. “There was a great attack by Big Thunder into the last lap that really broke things up but Len was there to make his own move to cruise in for the win.”

“I’ve been looking forward to doing the team sprint with Len for several years, with our team up at Whitehorse Nationals [2017] getting blocked by a cancelled flight. It was so much fun to race for the club that brought both of us up with a love for the sport and has done so much for us over the years.”

Ritchie qualified for his first World Cup start earlier at nationals, but it is hard to tell if that is more exciting for him than a team success.

“I’m a big fan of team events!” he wrote. “I love getting back on a team with someone and knowing you have to work together to try to win! Individual races are great but it was super fun to race with Malcolm today and get 2nd place! We are good friends from the same town, grew up skiing and going to school together so it makes it that much more exciting!”

Valjas and Thompson are much more experienced, but the enthusiasm remains.

“Len and I wanted to use today as a prep for Finals, and felt having a fun day of racing fast was the best way for us to enter Finals in the best spirits and with the body primed,” Thompson wrote. “Also with it being Len’s last Nationals it was really important for us to be out there representing Team Hardwood.”

The lead group in the 30km. Alannah Maclean (#152 on the left) would break away later. (Photo: Doug Stephen)

Tuesday brought the long classic day, 50km for the men and 30km for the women.

Sam Hendry earned his first senior national title in the 50km in 2:18.4, in a very tight sprint with Ty Godfrey (0.1 back) and Dominique Moncion-Groulx (0.2) for a Team R.A.D. podium. Hendry is in his final year as a junior, but looks ready for the transition to senior.

In the women’s 30km, Alannah Maclean (Big Thunder) took the gold in 1:33:15.4. Andrée-Anne Théberge (U Laval) out-sprinted Gina Cinelli (Revelstoke) by 1.4 seconds to take silver at 28.6 seconds back.

Maclean, who has ‘retired’ from elite racing took advantage of spring break at med school to compete at nationals.

“ I skied comfortably in the pack for the majority of the race and felt very strong on the climbs, so I knew if I skied tactically well I could put myself in a podium position,” Maclean wrote. “I made my break from the pack with about 4 km left to go in the race on the rolling hills in the back of the course, knowing that I had a lot of energy left in my legs to extend a lead over Chute Charron if anyone decided to come with me when I attacked.

“It was a lot of fun to ski with a large pack for the first half of the race, because it isn’t often that women’s mass start races pack up in Canada.”

Many of the women who qualified for WC finals skipped the 30km to prepare. But Maclean is in a different place as a full time student who set a goal of helping Lakehead University win the CCUNC (University) title at nationals.

“I discussed the option of sitting out of the 30 km with my coach and we decided that I have performed better with every race that I have completed this year, so we might as well keep the ball rolling.”

Nationals finished on Wednesday with the long distance classic for the younger categories.