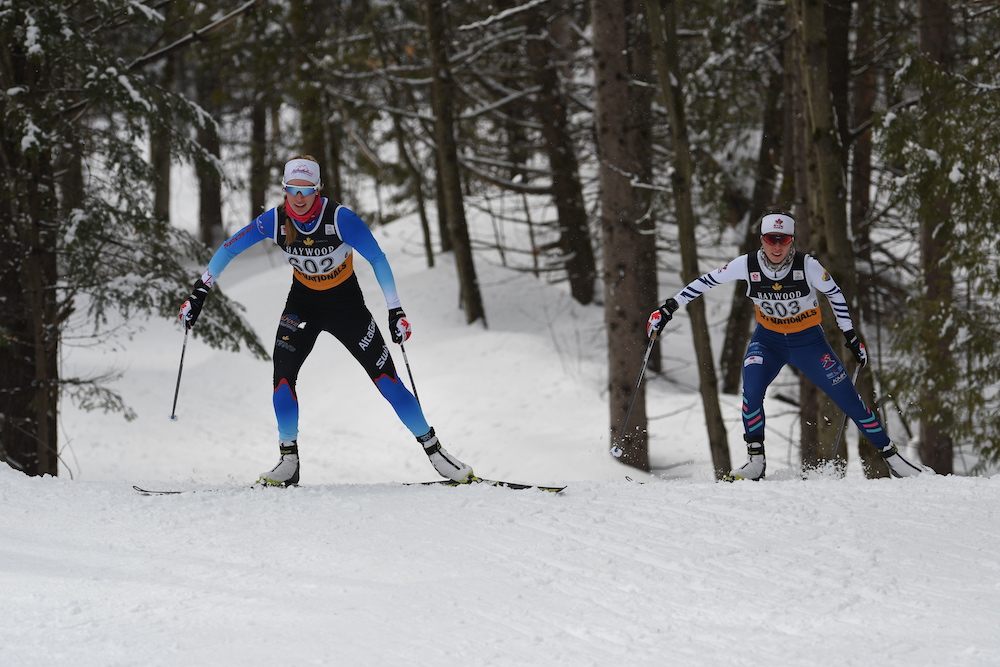 This article has been updated to correct an interpretation of the selection criteria.

Day two of nationals was day two of the pursuit at Nakkertok trails in Gatineau, Québec. The two-day pursuit format (classic interval start on day one, free technique pursuit start day two) was held for the second time at nationals. With both national titles and starts at World Cup Finals in Québec City up for grabs, it was always going to be an exciting day.

Lenny Valjas (CNST) justified his decision to come back to race in Canada with a second national title, out-sprinting the pack to finish the 10km+15km pursuit in 1:08.18.6. Philippe Boucher (CNEPH) turned in the fastest time of the day to take second, 0.7 seconds behind, and 0.3 seconds ahead of teammate Alexis Dumas. 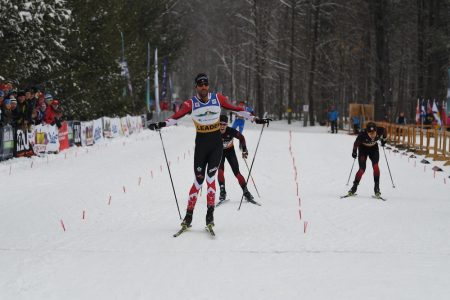 “On the last little bit of the 7.5k loop, on the flats, I decided to attack early before the final sprint hill,” Valjas told the LOC after the race, “because some of those young guys are so quick. I couldn’t trust myself on just the last hill, so I made them hurt with a couple km to go. It worked out, we all had a fun sprint up the last sprint hill into the finish.”

“No tactics for me today,” Boucher wrote. “I pushed hard from the start to the finish. I was targeting the best time of the day so I would qualify for World cups finals and become the national champion.”

The early group of eight shrank as Boucher pushed the pace and Valjas struggled to cling on. Dumas described it best: “They was not a lot of tactic today, Philippe Boucher was just too strong. The only thing I could do was following him and hope for the best in the sprint finish at the end.”

Skiing with the final four until the very end, Drolet battled cramps on the second lap.

“On the final hill, I had a lot of trouble moving, but I still managed to stay pretty close to the front and finished in 4th,” Drolet said after the race. “I was really happy about how I fought, considering everything else.”

Neither Boucher nor Dumas were fans of the pursuit format when it was brought back earlier in the season. As both have been on the podium at both editions, maybe they will grow to like it more.

“After the results I’ve got in the pursuit this year, I can only enjoy them,” Boucher wrote when asked if he still prefers mini-tours to pursuits.

Wednesday’s race featured two 5km classic loops in great conditions. Valjas was happy to get his win with nearly even lap times.

“Today was great,” Valjas told the LOC after the race. “I’m excited to be out here, and seeing all the kids. It’s a little bit of inspiration for me to be leading into the last World Cup in my career.”

Asked about edging out the 18 year old Drolet in the interval start, Valjas said “You’ve got to be on your A game to beat him, and I’m happy I got him, but he’s the future. I’m happy to see the young guys nipping at my heels.”

Drolet was happy with his classic race, finishing 9.9 seconds behind Valjas despite skiing his second lap 21 seconds slower than the first.

“Perhaps if I had paced the race better, I could have had a slightly better performance,” Drolet wrote in an email. “The course profile, however, does allow you to go really hard a lot of the time since there are usually long downhills after the climbs.”

Bob Thompson was third in the classic, which qualified him for World Cup Finals.

“I feel I am in a good place to have some great results this week,” Thompson wrote. “This was my first medal as a senior man so I’m really happy to finally be in top form again to finish the year. Very excited about World Cup finals!” 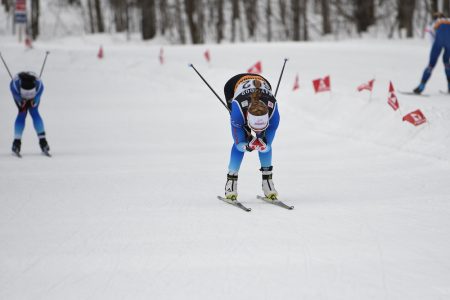 Dahria Beatty (CNST) put in the fastest time of the day to win the women’s 5km+10km pursuit in 40:50.8, completing Thursday’s two 5km skate laps in 26:45.8. Beatty and Katherine Stewart-Jones (CNST) worked together to catch Emily Nishikawa (CNST) just before the finish, with Beatty pulling clear for the win ahead of Nishikawa (7.3 seconds) and Stewart-Jones (9.8 seconds).

“Emily skied a really strong race and we were trailing her by between 7 and 15 seconds almost the entire race,” Beatty wrote in an email to FasterSkier. “Working together gave Katherine and I a slight advantage and I was able to finally close the gap on the second last downhill. After that we were on the sprint course and my mind went into sprint mode and I was able to open up a small gap.”

Beatty shared her tactical plan after her second place in the pursuit’s day one classic race. “Tomorrow the goal will be to try to catch those 8 seconds off the start and race with Emily.”

Stewart-Jones had a similar tactical plan, but executed it better. “I wanted to catch Dahria as fast as possible because I knew it would be much easier if we worked together. I was able to do that and we skied together most of the race,” Stewart-Jones wrote. “Dahria broke away with one hill to go and I caught Emily but she had me at the finish line!” 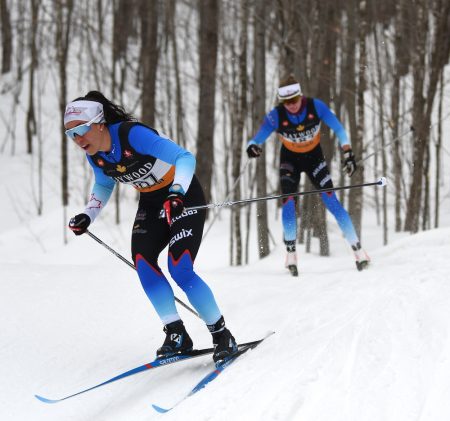 CNST’s Cendrine Browne was unable to close the gap and had a lonely ski in 4th, finishing 1:17.7 back. Sadie White (NTDC TBay) delivered the 5th fastest time of the day to move from 12th to 5th at 2:45.6 back.

Nishikawa earned her lead by winning the classic race Wednesday.

“I  am really happy with my race today,” she wrote about her win. “It is always an honour to win a national title. Racing here at Nakkertok is so awesome and seeing so many young skiers out is really inspiring.”

“I started off hard because I knew it would be a quick race,” she wrote, “but I think that I probably could have paced it better.”

Twelve athletes have already qualified, leaving seventeen spots to be decided at nationals: 8 men and 9 women.

The criteria says that the top Canadian in each of the freestyle sprint, then individual start classic, then pursuit, then time-of-day from the pursuit will be selected in that order. As there are more spots, the sequence will be repeated for 2nd place, 3rd place, until all spots are allocated. Athletes who have already qualified are skipped over. Clear and simple? Not exactly, but it became clearer with results from three of the four events.

On the women’s side, the first four places were filled by pre-qualified athletes in all three events. The selection order becomes the first five women in Saturday’s A final, then not Anne-Marie Petitclerc (5th in classic and top junior, but not eligible according to CCC), then White (5th in pursuit), the sixth placed sprinter, then Hannah Mehain (6th in classic). These respective athletes have earned their WCF start, assuming CCC’s interpretation is the same.

If anyone in the top six on Saturday has already qualified, the seventh place sprinter is selected, followed by Annika Richardson (8th in time-of-day counts as 7th because Germany’s Julie Richter isn’t eligible). Having fun yet? CCC will announce the final selection on Sunday.

For the men, we have seven pre-selected and eight spots to go. The first five sprinters on Saturday, along with Philippe Boucher (1st in time-of-day), Alexis Dumas (3rd in pursuit), and Bob Thompson (3rd in classic) are locked in. The sixth place sprinter and Ricardo Izquierdo-Bernier (6th in time-of-day) are waiting on someone higher in the list making the A final.

Lenny Valjas blasting down to a national title in the 10km classic. (Photo: Doug Stephen)