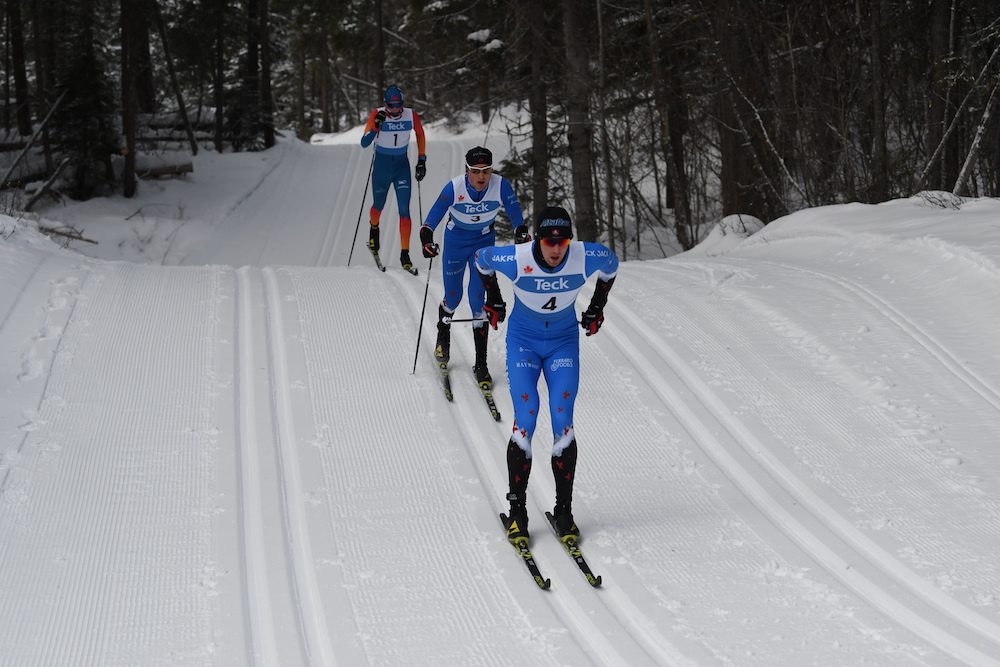 One week after Easterns, it was time for Westerns, and the Polar Vortex made the trip for both weekends.

At Easterns, the air was cold enough to keep the organizing committee on edge at the start of the weekend, and freezing rain complicated driving  plans. At Westerns, the cold weather held off to Sunday, but falling snow on dry, salted roads created a sheet ice for Friday’s commute. Both championships had less athletes than expected, with driving conditions and weather predictions having an effect. 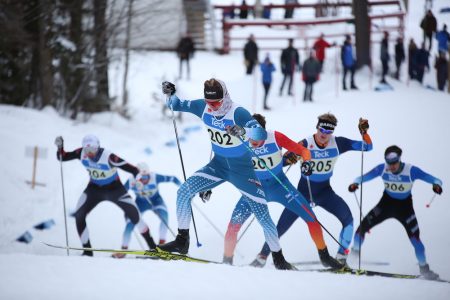 The action kicked off Friday with skate sprints at the Telemark Nordic trails near Kelowna, B.C., in sunshine and -11C.

“I felt really confident going into the final,” Weaver told FasterSkier. “I led all of the race, right until the finishing stretch and Benita came up, and I think she got me right at the end.”

Despite placing second, Weaver was happy with her tactics: “I wasn’t super confident with my hop offset on those tough hills, so my goal was to get out into the lead and control the race. Kinda position myself well so I could have a good finish.”

Peiffer and Elliot grew up racing together before Elliot moved to Canmore, and were clearly enjoying racing together again, completing each other’s sentences during the post-race interview.

Elliot: “It was really fun, we had all the BC skiers that we grew up skiing with. It was super-fun to all be with each other in the same heats and…”

Peiffer: “…Back to the good old days of racing together.”

Tactics were also a shared vision.

Peiffer: “You stay with the pack going up the big hill, and then it’s really easy to draft because you have a really long downhill.”

Elliot: “If your skis work for you.”

The open men raced the same course and Julien Locke (CNST) was in dominant form, winning the qualifier and each heat by over 3 seconds, taking the A final in 2:28.23.

“I’m just here to race hard,” Locke said after his cool down ski, “so I just raced hard every round.” Locke has been fast in 2019, winning the sprints at US Nationals, Easterns, and Westerns, but he would probably trade any one of those to improve on his second place at the World Championships qualification sprint at Bishop’s University.

“Tactics were tough for me,” Drolet said. “I was slow off the start, so I was behind a little bit. Basically, I had to catch up so I was really focusing on pushing over the tops of hills really hard. In the end, it was a sprint to the finish between Gareth and I. Julien was a bit ahead [laughs at the understatement]. It was fun.”

Williams was bouncing back after getting ill on the trip home from U23’s in Lahti and leaving Easterns without starting a single race.

“I started to feel better round after round, because I hadn’t done any intensity at all, so the feelings were coming back, but I kind of lost it there on the last hill,” he said. “My legs felt really heavy and I pushed really hard but it wasn’t quite enough to out sprint Rémi, and not enough to keep up to Julien Locke either.”

312 athletes raced in good conditions on a day where the driving conditions were anything but good. 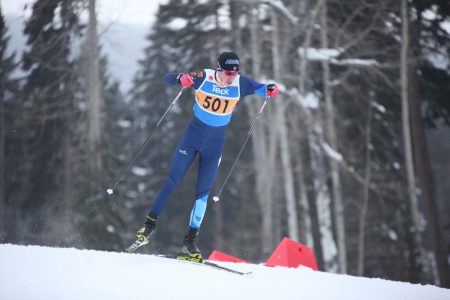 The new 5km loop at Telemark received a homologation certificate less than a week before the event, but it was immediately put to use with the men doing three classic laps and the women doing two in -11C air and intermittent light snow.

Williams dropped out early in a race he probably shouldn’t have started. It is hard to miss a race for illness, and harder still when the local tv station is there to see their hometown star, and your mum is the race secretary.

Black Jack teammates Locke and Drolet put the hurt on Hendry early, before Drolet broke clear to win alone in 42:18.4, 4.8 seconds ahead of Locke. Hendry hung on for third, losing 42.2 seconds on the final lap.

“I tried my best to hang on to the pace, but Rémi’s in great shape right now, coming off his big results at world juniors, so [it was] hard to stick on,” Hendry said after. “My skis weren’t quite as fast as the others. On all the downhills, they’d open up a little gap and I’d have to try to bring it back on the climbs and the flats.”

“Rémi and Sam were skiing fast, it was fun to battle with them,” Locke said. “I’m a little bit stronger on the flats, [Rémi’s] a bit of a stronger climber. We were pushing each other and just trying to ski fast and work together.”

“It was a really fun race today,” Drolet said after doping control “It was a decent pace off the start, skiing with my teammate Julien, Gareth for a bit until he unfortunately dropped out, and then Sam Hendry. It’s a pretty hilly course, so there’s not a tonne of double poling, but I think the parts of it that are double pole are important to ski well and conserve energy for the uphills.”

Drolet and Locke worked well together, up to a point. “Once Sam started to fade a little bit, we attacked and dropped him off,” Drolet explained. “Then we skied together for the rest of the race until the final climb, where I managed to pull away from him.” 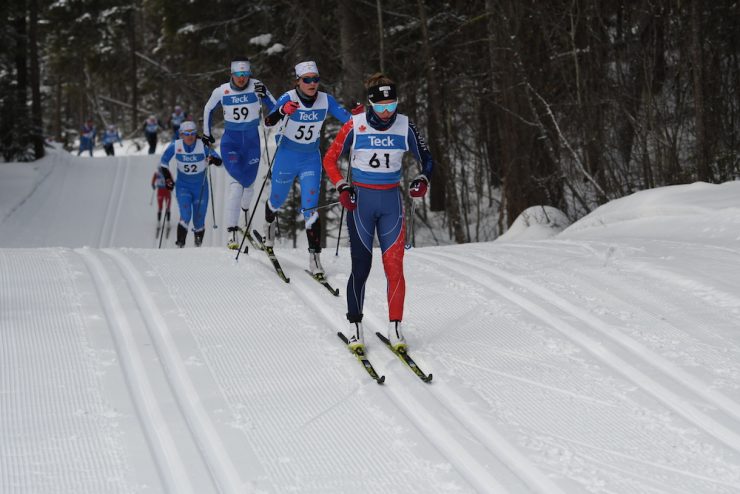 The open women’s 10km was all about the next generation. Novie McCabe (Methow) got away early to win in 32:42.6 minutes. Black Jack teammates Jasmine Drolet and Molly Miller were second and third at 53.4 and 1:28.1 back. All three are in the junior girls category and competed at Junior Worlds in Lahti.

“I basically went out from the start hard, and tried to hold it,” McCabe told FasterSkier. “Going up the first hill, I tried to get into the lead and then on the double pole section I tried to make a break and just push hard into a downhill and that’s where I kind of gapped people by a little bit and then I just went from there.”

As an American, McCabe has a Canadian Points List ranking that put her in the third row at the start. Asked about whether this is good practice for racing in Europe, she replied “Yeah, it was definitely good to have some practice with that, navigating my way through people.”

Jasmine Drolet, at sixteen, a year younger than the other two on the open podium, kept things simple in the interview, describing her day as “good race, good skis.”

“In Canada it’s not hard to be the fast one, but when you get there [at World Juniors], it’s quite a shock,” Jasmine Drolet explained. “It’s good to ski with the best in world.”

“I haven’t been feeling super great in a lot of the distance races this year, so I was happy to have a better day today,” Miller said at the end of the day. “It was a bit aggressive in the beginning for sure. I came out of the lanes in a bad place, but it seemed to spread out very quickly.”

Among the 386 racers were some of Canada’s para-nordic team, here to prepare for World Championships starting the following Saturday.

“Races are always better than intensity,” Mark Arendz (CPNST) told FasterSkier post-race. “We’re using this as an intensity, just this single race from Westerns, to prep for World Championships in Prince George [B.C.] next week.”

(In the video below, you can see Arendz in the open men’s start, look for the national team suit, second lane from left.)

The temperature, despite predictions, reached -17C by 9:00, allowing the relays to start on time.

For most, the relays are really about having fun with friends. The results are summarized in Sunday’s rundown.

“Relay events are always fun races, even in -17 conditions,” Rémi Drolet wrote in an email Sunday night. “It also does not matter how far ahead or behind you may be. It is always important to go as fast as possible since it can be hard to predict exactly what will happen after you have tagged your teammate.”

105 teams braved the cold to enjoy another good event at Telemark. 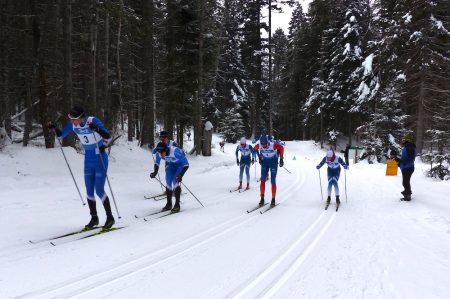 “My first race [here] was in 2005, my first ever provincial race, BC Midget Championships. I was 13 years old and that was my first race outside of the Kootenays. It was a pretty big day for me.” — Locke

“Seeing the young kids racing this weekend certainly brought back memories.  Kelowna was one of the locations where I raced most in my younger years, and it was there that I learned many of the fundamentals of racing.  Much of my early understanding of race preparation, tactics, and even technique was developed racing at Telemark.” — Rémi Drolet

“It’s really nice to just be able to come up here and have some great competition and the races are really well organized.” — McCabe, on crossing the border from the Okanogan Valley in Washington state to the Okanagan Valley in B.C.

Doug Stephen has albums on Flickr: Sprint, Classic, and Relay

On zone4 results, click on a skier’s name to pull up pictures of that athlete in the selected event. Greg Redman, featured here, is one of the photographers contributing. There are a lot of photos, with over 60 photos of some athletes in some events.

Note that masters and the youngest athletes are in the Okanagan Cup links under Full Weekend, and some of the para athletes competed in the open category for the classic race.