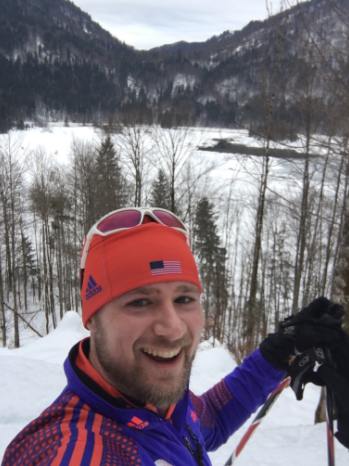 Speaking to Matt Emmons, I was reminded that much of sport remains in the realm of capturing a focused mental state. Emmons, at thirty eight years old, serves as the shooting coach for U.S. biathlon. In as much as he hones body position and breathing techniques on the range, he’s also present to coach clearing the mind when the heart rate thumps and the internal tick-tock of time on the shooting range is part of the biathlon cacophony.

Emmons has survived thyroid cancer and missed medal opportunities at high stake events. Now settled with a family in the Czech Republic, he maintains the ability to understand what matters as his sport career was besotted with Olympic success and near-miss medal opportunities. Emmons was raised in New Jersey and began shooting when a family friend, who served as an FBI firearms instructor, spoke to his father about paying for college. The friend informed Emmons’ dad that several universities offered scholarships for shooting athletes.

“I went over and he had me shoot some rifles and pistols and some shotguns and he was like ‘hey, you are pretty good at the rifle,’ and he asked if I wanted to try this as a sport,” said Emmons in a call during a recent U.S. Biathlon camp outside Midway, Utah.

Emmons earned a scholarship to the University of Alaska-Fairbanks where he excelled in the rifle events. He went on to compete at four Olympics between 2004 and 2016 — earning a bronze, silver, and gold. From a biomechanics perspective, Emmons shooting specialties involved disciplines in both prone and standing. And yes, he did learn to ski during his time in Fairbanks.

For many years, Emmons was based out of the Colorado Springs Olympic Training Center where he worked with sport psychologist Sean McCann. McCann also advised U.S. Biathlon. Through that relationship, Emmons began assisting U.S. Biathlon with their shooting four years ago.

Emmons said the job involves not only creating body awareness when positioning the rifle —  inhaling and exhaling, and pulling the trigger — but also developing the proper mental state.

The morning we connected with Emmons, he had concluded a visualization session with the national team. Each athlete was asked to focus on some aspect of their training or racing, and envision that situation being successful.

“Because it all starts there,” said Emmons. “This was a classroom setting. I have my Bluetooth speaker. I have a recording that Sean McCann recorded for me years ago, I have used them pretty much my whole career.”

Emmons also remains zeroed in on the technical principles of effective shooting. For biathlon beginners, he encourages athletes to simply familiarize themselves with the rifle.

“I have them hold the rifle without the sling and get them set up where I think they are in balance, so the body and the rifle are matching,” Emmons said. “It is not like they are trying to adjust their body to the gun, it is the other way around. I have them do it right and then have them adjust the gun to that. That is the first step. Then the same thing with standing —  how to use the skeleton correctly, and which muscles you need to be thinking about and using that so they can stand somewhat still and hit the target.”

Emmons explained it remains a steady and slow tempo progression for most. Improving at shooting becomes a periodic revisiting of the fundamentals and adding new biomechanical principles when each athlete is ready. “We revisit and as they increase their skill level we make more adjustments if needed as they get comfortable,” Emmons added. “Shooting is so complex, that you can only introduce them to so much at a time.”

In October, when we spoke to Emmons in the run-up to the 2019 U.S. Biathlon Fall Team Trials, he explained that mid-fall was not the time to introduce significant changes to an athlete’s shooting process.

“At this time of year, unless the house is burning down, what you have at this point in the season is what you got,” said Emmons. “I am not making any big changes and I’ll let them go through the competition season and try to keep it manageable. Basically, every year we see how far we can get during the pre-season with position changes and technical changes to make it easier for them to shoot.” 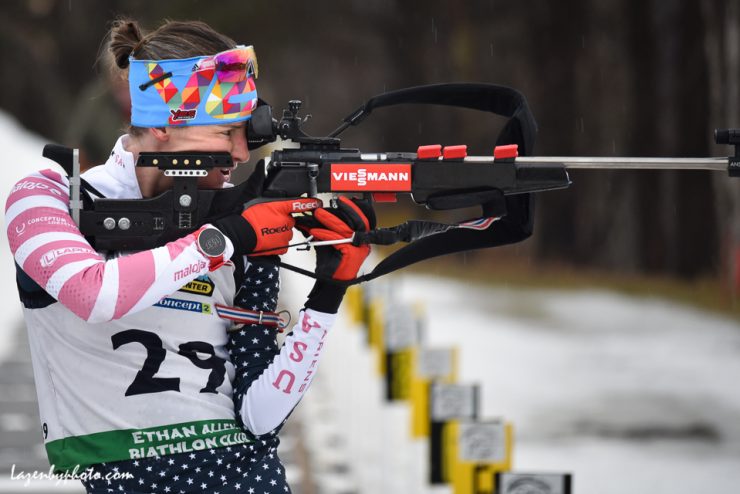 Clare Egan on the range during the women’s 5 k super sprint at the 2019 USBA National Championships. (Photo: John Lazenby/lazenbyphoto.com)

With each athlete possessing a different aptitude for shooting and processing new information, some athletes take a year to absorb technique suggestions, others might take two. The rate of absorbing and incorporating those changes is also impacted by the different torso and arm lengths on the biathlon team added Emmons. Each athlete improves their shooting in a slightly different way. Clare Egan comes to the sport with a long torso and shorter arms, whereas Susan Dunklee’s shooting technique is adjusted for her shorter torso, longer arms, and higher hips. Success does not have a one size fits all mold when it comes to shooting proficiency.

Targets fall on the shooting range when many things align. With the aid of Emmons, it’s the hope that a clear and focused mind along with proper mechanics can allow U.S. athletes to realize their sporting goals. There remains the inexorable ticking away of time with each shooting bout. As much as biathletes would like time to stand still when faced with five tiny targets and an unpredictable crosswind — the seconds elapse.

“With Clare, for example, she has speed on the skis,” said Emmons. “But on the range, it’s about hitting the targets. I don’t care if you shoot standing in 25 seconds and you have three misses. That is over a minute basically when you look at your penalty loops. It is just not worth it. Let us hit the targets consistently and then let’s build on top of that.”

Last year’s success for Egan was built on better fitness and technical improvements for her shooting. Yet Emmons emphasized that taking slightly more time on the range paid dividends. “Clare is probably not going to be the fastest shooter in the world. That is OK. She can ski well. If she is reasonable on the range with her time and hits her targets, we are going to be competitive.”

Egan improved her shooting accuracy in 2019 to 81 percent from 74 percent in 2018. According to the International Biathlon, Egan’s overall ski speed improved by three percent. In her final race last year, she popped her first IBU World Podium with a third place in Oslo. Emmons’ tenant of slowing down on the range, when it came to helping improve Egan’s results, played out.

“Shooting is really nothing more than a skill, and skills can be trained,” said Emmons.