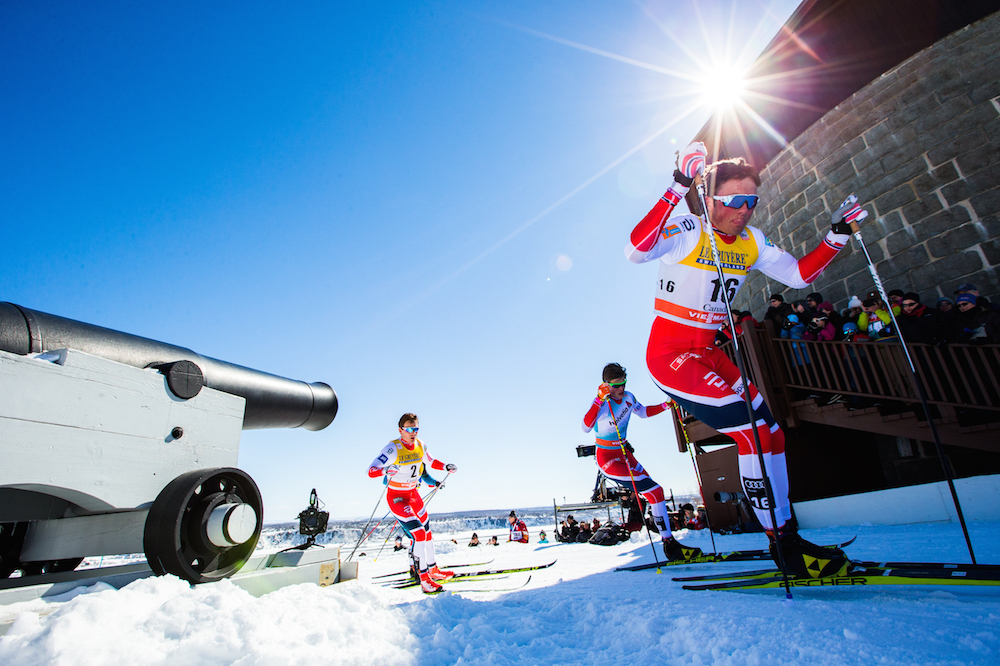 North American World Cups are becoming a fixture on the schedule, with the season ending in Canada in 2016, 2017, 2019, and 2020. In 2020, Minnesota will join in with a city sprint- that race falls between the Quebec City and Canmore events. These races are important for athlete development as both Canada and the U.S. are granted ‘host nation’ start allocations. Fifteen male and 15 female athletes may represent each country with the added bonus of allowing young skiers to see World Cup stars in person.

Cross Country Canada wanted to integrate these World Cup events with the domestic racing calendar. As nationals are held at the end of the season, the obvious solution was to select a nationals host that is near the World Cup Final. While Canada has roughly the same population as California, that population is spread over 5.5 time zones in a land area far larger than the United States. The opportunity to race nationals and watch a World Cup with a single round-trip flight makes this much more attractive and affordable to families.

With the introduction of the Junior FIS Invitational Rising Stars in 2019 (a race for young skiers on the World Cup course), there is a third incentive to make the trip and see Alex Harvey’s retirement weekend in person. CCC’s Dave Dyer is excited about the new addition: “With the Rising Stars race, those [young athletes] that have a FIS license can also train beside WC athletes and compete on the same course.  We have junior teams from across North America planning to participate in the junior FIS race.”

To make this schedule work, CCC needed host venues for nationals that could set homologated courses for seven days of racing later in March. Even in Canada, reliable snow in March can be a challenge.

To align with 2019 World Cup finals in Quebec City from March 22 to 24th, nationals will be hosted less than five hours drive away at the Nakkertok trails, in Gatineau, Quebec from March 13th to 20th.

In 2020, Sovereign Lake will host nationals after World Cup finals from March 25th to April 3rd. The 2020 bid document requested that bidders plan to follow the three final world cups in 2020, from March 14th to 22nd (Quebec City, Minnesota, Canmore). Sovereign Lake, along with the interconnected SilverStar Mountain Resort, has 105km of trails open every April. As the annual Spring Fling snow camp in May shows, ‘late season’ skiing is pretty reliable at 1,600m elevation. 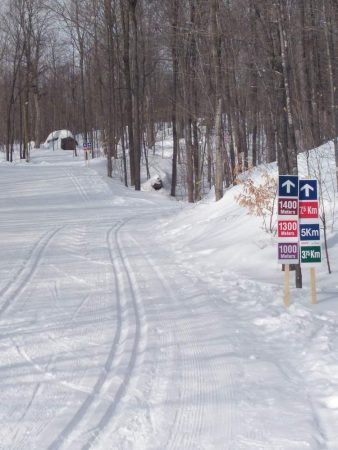 In eastern Canada, there is snow and good skiing in March most years, but guaranteed snow on homologated courses is less certain. As a result, most clubs choose earlier dates in their bids to host nationals, sometimes even starting in February. With the advent of snowmaking at the Nakkertok trails in 2016, the game changed. While natural snow is abundant this season and snowmaking won’t be needed this month, the capacity to make snow was an important part of Nakkertok’s winning bid.

Gatineau remains an accessible area for many. The trails sit across the river from Ottawa (Canada’s capital) and are less than an hour from the major airport. The region is also surrounded by large population centres like Montreal and Toronto, with over 12 million Canadians within six hours drive. To restate, one third of Canadians live within weekending distance of the venue. This is one factor in the historic success of Eastern Canadian Championships over the past decade, with over 700 racers consistently making this the largest FIS event in North America in those years.

A second factor contributing to the venue’s race-hosting success was the formation of a stable coalition to host events. The 2019 nationals will be hosted by Évènements Nordiques Gatineau Nordic Events, an organization made up of Chelsea Nordiq, Nakkertok Nordic, Club Skinouk and the Gatineau Loppet. ÉNGNE also hosted the Gatineau stage of Ski Tour Canada in 2016. 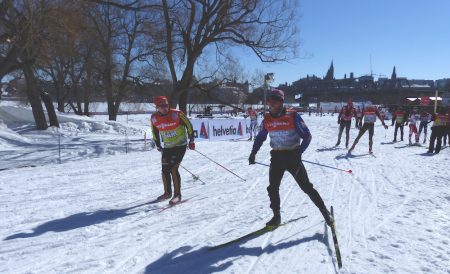 ÉNGNE was the host for stage 1 of the Ski Tour Canada in Gatineau. Martin Johnsrud Sundby inspects the course with Ottawa’s parliament building visible in the background. (Photo: Peggy Hung)

Pierre Millette, Chief of Race for 2019 Nationals and a Skinouk member, summarized the formula for success this way: “Mutual respect, a written agreement, complementary strengths. … The right people in the right places.”

Even though the races will be held on the Nakkertok trail system, every Nakkertok member interviewed for this article has been careful to reference the coalition.

Toni Scheier, a Nakkertok member who writes the CCC race reports, followed up with an emailed request: “Please emphasize that while the event is held at Nakkertok, […] the organizing committee ÉNGNE is from Skinouk, Chelsea, Nakkertok and Gatineau Loppet.”

This care to respect the contributions of others and a points system to share profits appear to be the key difference that keeps the engine turning. It is also easier to share profits than losses, which has contributed to ÉNGNE’s past reluctance to bid for late season events, as cancellations and venue changes are never profitable.

When Nakkertok’s snowmaking infrastructure was completed, the club expected to create reliable skiing on December 1st. 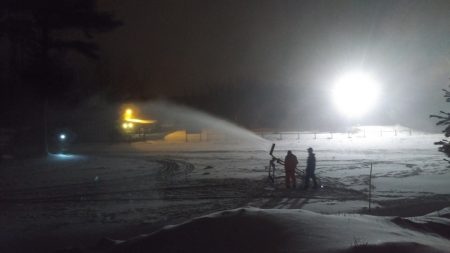 “From my perspective as head coach of the racing program, this is an amazing opportunity,” Nakkertok’s Kieran Jones wrote in November 2016. “Snowmaking has leveled the playing field across the country and the continent for our program. We’re competing against other top clubs and regions who have access to early season snow, and up until this point we have been at the mercy of the weather. For example, last season’s poor early-season weather meant we didn’t have skiing in the Ottawa-Gatineau area until between Christmas and New Year’s.”

Talking about the first Candy Cane Cup, scheduled for December 18th, 2016, Jones wrote, “our goal in the future is to create a high quality race experience at Nakkertok that is accessible in terms of cost and travel distance for the large numbers of athletes in Eastern Canada and the US who want and need to race.”

Scheier elaborated on Jones’s email, writing “It will also ensure snow for the Easterns where clubs from across the country attend, (700 plus competitors) and for our Nationals bid, likely 2019.”

On November 23rd, 2016, the day after Jones and Scheier made these statements, the first skiers were out training on man-made snow. Subsequently, they were able to open limited trails on November 11th, 2017 and November 12th, 2018. Those ambitious dreams are starting to look real. 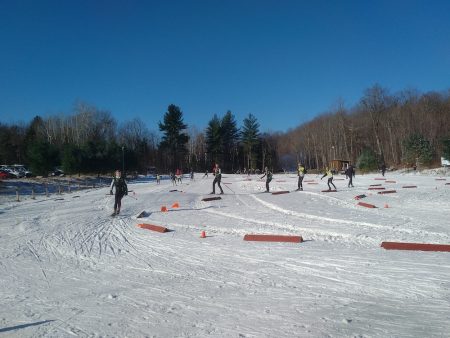 The snowmaking system at Nakkertok came about in an unusual way. The core funding came from the Kraft-Heinz Project Play contest, which offers annual awards to communities in Canada to create opportunities to play. The grand prize winner gets $250,000, and the three runners up collect $25,000. Nakkertok won the 8th edition in 2016.

The race team raised $50,000 and money from other parts of the budget filled in the gaps to build the original system. The city of Cantley (on the west side of the trail system) helped Nakkertok to a “Fonds de développement des territoires” grant of $60,000 in 2017.

The ‘NakkerTrak’ expansion in 2018 is evidence of continued success in snowmaking and fundraising. 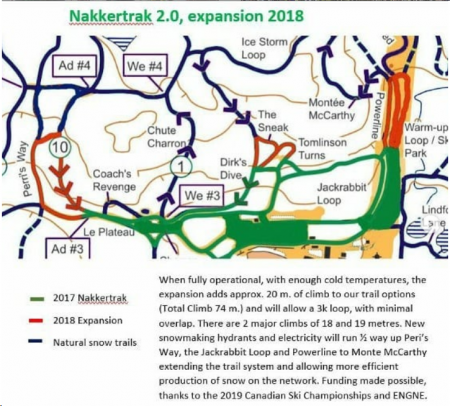 In the final analysis, was all the work that went into connecting these events together worth it? Many families will be making the combined trip, this nationals should be the largest FIS event in North American history, and to give Dave Dyer the last word:

“There are 250 racers in the National Capital Region that can sleep in their own beds.”