Pay 9 Euros a day, get a 950-meter loop in return. If snow were to take on a monetary value, that’s how much the Planica Nordic Centre charges for a day pass in its snow tunnel, new to the city’s Olympic Sports Center since the spring. But to others, the opportunity to ski on snow at the tail end of summer is priceless, even if it is under the fluorescent lights and within the concrete walls of a three-level parking garage.

Among those “others” are the Craftsbury Green Racing Project (CGRP) elite cross-country skiers and biathletes, who spent Sept. 12 to Sept. 20 in Planica, Slovenia, training in the city’s ski tunnel. As a few explained, getting on snow at this time of year outweighs the occasional lassitude that comes from skiing two-plus hours on a less-than-1-kilometer loop.

“No matter what condition it is nordic skiers love their first time on snow of the season,” Ben Lustgarten, new to the CGRP cross-country team, wrote in an email. “We were able to do speeds, short level 4 intervals, some threshold, accelerations, and sprint simulation workouts. There was fair amount of terrain to do varying technique work and video analysis for the small amount of space.”

“The intensity and technique really helped to keep the tunnel from getting too boring, as there was always something to think about or work on, or at the very least a coach on hand videoing for later technique review,” Patterson wrote in an email. “It gave us an opportunity to practice being adaptable to snow conditions and terrain (ie corners); even if those particular features in the tunnel would be rarely seen on a race course, they were valuable in their extremes. I feel more prepared than ever to handle a course with tons of 90 and 180 degree corners, even though that’s unlikely to happen often.”

The athletes, along with Craftsbury’s head coach Pepa Miloucheva and assistant coaches and wax technicians Nick Brown and Sam Doherty, completed a weeklong training camp in Planica, taking full advantage of the three-level snow tunnel. The following week, the group headed to Schladming, Austria, for eight days of volume training on the Dachstein glacier, more than 9,800 feet above sea level. In Planica, nearly 7,500 feet lower, much of the team’s first week focused sharpening agility, coordination and speed.

“The tunnel is a perfect environment for working on both technique and speed, with enough transitions and tight turns to keep the skiing interesting,” Grossman wrote in an email.

“I feel more prepared than ever to handle a course with tons of 90 and 180 degree corners, even though that’s unlikely to happen often.” — Caitlin Patterson (CGRP) after training in the Slovenian ski tunnel

Grossman, who recently switched from cross-country to biathlon, explained that the biathletes’ intensity training slightly deviated from their original plan when they learned that Slovenian Summer Biathlon Nationals were being held in Pokljuka, Slovenia, about an hour away from Planica.

“The camp took a little turn when we found out about the rollerski races in Pokljuka, so what was going to be a primarily on-snow camp turned into a combination of skiing and rollerskiing,” Grossman wrote. “This allowed us to still focus on technique and shorter speed in the tunnel, while also getting the opportunity to race.”

The biathletes had originally planned to use the Pokljuka range for a few shooting sessions, but quickly decided to jump into the races when they discovered the competitions were taking place at the same location. Grossman competed in both races that weekend — the women’s 7.5 k sprint and 10 k mass start — as did her teammate Emily Dreissigacker.

“We actually didn’t even know Slovenian Nationals were happening until we tried to sign up to use the range and they told us we couldn’t because there were races,” Dreissigacker wrote.

Dreissigacker, who married Howe, her teammate, last month and spent a few weeks before the camp on a honeymoon with him in Italy, explained that the competitions elicited an opportunity to reconnect with racing, even within a small field.

“There wasn’t a ton of competition in the senior women’s category, four of us to be exact, but one of the Slovenians was Teja Gregorin who won bronze in the pursuit in Sochi, so it was pretty cool to be able to race against her,” Dreissigacker wrote. “For me it was also a good way to re-focus after the craziness of the wedding.”

“We actually didn’t even know Slovenian Nationals were happening until we tried to sign up to use the range and they told us we couldn’t because there were races.” — Emily Dreissigacker (CGRP) on racing at Slovenian Summer Biathlon Nationals

Dreissigacker finished third in the women’s 7.5 k race, with two standing misses, and Grossman placed fourth. In the mass start the next day, Dreissigacker once again reached the podium in third and Grossman repeated in fourth.

“It was really fun to be able to jump into the Slovenian races!” Ethan wrote in an email. “While it did change up the plan a bit that first week, it think it was for the better, and I’m really glad we were able to compete. Biathlon races in the US are pretty few and far between, and many of them are also ‘trials’ of some kind. It’s super valuable to get in competitive racing experience outside of those trials races to get used to the pressure of competition without feeling like your season is on the line.”

Along with the CGRP athletes, the men’s field included the Slovenian national biathlon team and some non-national team skiers, as well as a few Bulgarian national-team members.

“The competition at these races was really pretty similar to that of the US rollerski nationals we had in August,” Ethan explained. “The big name in the men’s field was Jakov Fak who has an Olympic bronze, and a bunch of World Cup victories. Fak has is a very relaxed and efficient skier and it was awesome to get to ski behind him for a bit in the races.”

After Slovenian nationals, the Craftsbury crew ventured to Austria for a week of altitude training. The team planned to train through Wednesday and fly back to Vermont on Thursday this week.

“Both places are only 2 hrs apart, so was very convenient for a week long speed block in the tunnel and a week and a half volume block on the glacier all on snow,” Miloucheva wrote in an email. She explained that “some speed work followed by some good distance hrs on snow,” were the primary goals of the camp.

While it wasn’t the first time the CGRP spent a few weeks of fall training on snow, this year was the first split camp featuring the Slovenian snow tunnel.

“This is the third year in a row that the GRP has come over to Austria for an altitude camp on the Dachstein Glacier,” Ethan explained. “This year I was really excited about the split the camp between two locations, with two different focuses, and I think that has really helped make the most of the trip. Both locations have had some awesome resources for training, and beautiful scenery.” 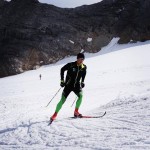 Ben Lustgarten getting in a final day of classic kilometers in on the Dachstein glacier in Austria this month. (Photo: Caitlin Patterson) 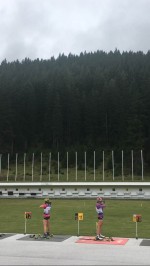 Craftsbury GRP’s Ben Lustgarten (r) and Caitlin Patterson get in some classic speeds while training in the Slovenian ski tunnel in Planica this month. (Photo: Sam Doherty)