Susan Dunklee (US Biathlon) hitting every target in the prone shooting stage of the women’s 7.5 k sprint at the IBU World Cup in Annecy, France, on Thursday. She ended the day in 10th place with perfect 10-for-10 shooting. (Photo: Glen Crawford)

Susan Dunklee’s start to another International Biathlon Union (IBU) World Cup season hadn’t played out as she’d hoped, specifically in terms of results. Coming off a banner winter, with a silver at 2017 World Championships (in the women’s mass start), Dunklee 31, had so far placed 53rd, 79th and 97th, respectively, in non-relay races over the last two weeks. She had yet to race a mass start, but also had yet to qualify for a pursuit in two World Cup sprints.

So she went back to the drawing board, back to basics and to a “moose garden”.

“My confidence took a big hit these past couple weeks and it was a real challenge was working through that,” Dunklee wrote in an email to FasterSkier on Thursday.

“I tried to find some non-biathlon activities like visiting a ‘moose garden’ in Sweden and seeing the ‘Krampus’ in Austria,” she explained, referring to an Advent costume tradition, “to keep my mind fresh so I wouldn’t obsess 24/7 over disappointing results.  I also tried really hard to take a moment each evening to appreciate all the positive things that happened over the course of the day. And I kept telling myself that I am resilient.”

After missing eight targets in last week’s snowstorm sprint in Hochfilzen, Austria, she sat down to brainstorm with US Biathlon consultant Matt Emmons, a 2004 Olympic champion in rifle shooting.

“All summer I’ve been working on some fancier shooting skills, such as wind shading,” Dunklee explained. “Basically we decided I could benefit from focusing back on the absolute basics of shooting: sight alignment, trigger squeeze and follow [through]. That’s what I’ve been doing the last few days.”

Susan Dunklee (US Biathlon) out of the start of the IBU World Cup women’s 7.5 k sprint on Thursday in Annecy, France, where Dunklee placed 10th overall for her best result of the season. (Photo: Glen Crawford)

On Thursday, she started 60th out of 93 in the women’s 7.5-kilometer sprint in Annecy (Le Grand Bornand), France. In warm, slushy conditions with little wind, as Dunklee described it, she fired away for perfect 10-for-10 shooting to put herself in ninth at the finish.

Dunklee was ultimately bumped one spot down to 10th overall, 1:16.8 minutes behind the winner, by Germany’s Laura Dahlmeier, who started in bib 86 and ended up second — 33.9 seconds behind Slovakia’s Anastasia Kuzmina in first.

Kuzmina, who notched her second-straight individual World Cup win with a time of 20:59.6, and  the rest of the top-four finishers — Dahlmeier, Ukraine’s Vita Semerenko in third (+41.4) and Italy’s Lisa Vittozzi in fourth (+50.0) — all shot clean, just like Dunklee. Semerenko’s twin sister Valj, who placed seventh (+1:06.8), was the other woman in the top 10 to hit every target.

Dunklee spent all of the race in the top 10, ranking eighth after the first of three loops and seventh after the second loop.

“All the difference today for me was made on the shooting range,” Dunklee wrote. “The skiing has been fine all season. I backed off approaching the range, and I took enough time to make sure I was taking good shots.”

Her top 10 was her best result since placing seventh in a sprint last March in Oslo, Norway. By landing in the top 60, Dunklee qualified for the Annecy pursuit on Saturday, which will be her first of the season.

“Today helped me put to rest some doubts I was starting to have in my abilities,” she wrote. “I am very grateful to qualify for the pursuit.  It will be a good opportunity for some head to head racing which I haven’t seen much of yet this year.”

Starting in bib 23, Kuzmina rocketed to first place with the fastest course time and fourth-fastest shooting and range times, all while hitting every target.

“It is always a great feeling to be a winner, especially when the race was pretty good from start to finish,” Kuzmina, a two-time defending Olympic sprint champion (from 2010 and 2014), told the IBU, according to a press release. “It was really important to shoot two times zero. The snow condition was not too comfortable for me; I really want to thank my service team for the skis. That was an important part of my victory.”

The Russian-born Slovakian (whose brother is Russian biathlete Anton Shipulin) took the lead after the first shooting, leaving the range 6.3 seconds ahead of Germany’s Denise Herrmann, who started ahead of her in bib 16 and also cleaned prone. Herrmann had a penalty lap in the standing bout to slip to sixth and 45 seconds back, while Kuzmina cleaned again to start her final loop 35 seconds clear of Vittozzi, who was in second at the time wearing bib 13.

A much later starter in bib 86, Dahlmeier cleaned prone to move into third, 6.7 seconds off Kuzmina’s time. Her next time in the range, Dahlmeier shot clean again to improve to second, but she was still 25.8 seconds short of Kuzmina’s time with one loop to go. Kuzmina skied the second-fastest last loop (about two seconds slower than Switzerland’s Selina Gasparin) to lock up first, while Dahlmeier ended up nearly 34 seconds back in second place.

“This was the first podium in an individual-start race of the new season for me and that makes me very very happy,” Dahlmeier told German broadcaster ZDF, according to a translation. “I am excited that it worked out today, it took a while until I now got back in shape. I am not at 100 percent yet, but today was a super race and I am just happy about that, it was a lot of fun to race today.”

Thursday marked Dahlmeier’s fourth race of the season after she missed the World Cup opener in Östersund, Sweden, due to illness. In Hochfilzen, she anchored the women’s 4 x 6 relay to the win and placed 10th in the pursuit and 16th in the sprint.

“It’s a bit of an unusual situation for me to have such a late bib in an individual race, but as an anchor in relays I am kind of used to that, passing the time by listening to music or something like that,” she said. “When I was at the start gate I was focused again and just tried to do my on race. It has its pros and cons, I just tried to make the best of it.”

For Vita Semerenko, it was her first podium since taking bronze in the sprint at the 2014 Olympics. She missed the two seasons that followed due to a back injury, and gave birth to her son just over a year ago.

“I will never forget my first training after giving birth,” she told the IBU. “My coach said, ‘If we don’t give it a try, we will not find out what happens next.’ I said ‘OK’, but I had a lot of anxiety about coming back to biathlon, as I understood that coming back after three years would be tough. I am also thankful to my husband who told me every day after I had my child, ‘Vita, come on, come on, let’s make a comeback!’ ”

“I am noticing that I am not feeling as fresh anymore as in Östersund, it was quite the number of races for me already,” Herrmann, who won both the sprint and pursuit in Östersund, told ZDF. “And I’d say deep snow conditions like today aren’t ideal for athletes over 60 kilograms. But nevertheless it was a good race, I really tried to hit every shot, and lost quite a few seconds with my shooting time. But I am back on track compared to last weekend, and hope I can continue my successes in the pursuit race.”

In the women’s 10 k pursuit on Saturday, Kuzmina will start 34 seconds ahead of Dahlmeier in second, and Vita Semerenko will head out another 7 seconds later in third. Dunklee will start 1:17 back and just 4 seconds behind Valj Semerenko in seventh. 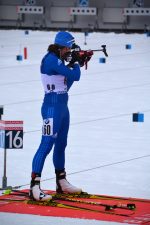 Susan Dunklee (US Biathlon) during the standing stage of the women’s IBU World Cup sprint in Annecy, France. She went on to place 10th. (Photo: Glen Crawford) 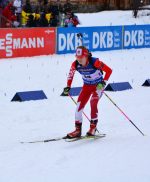 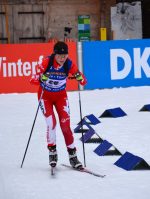