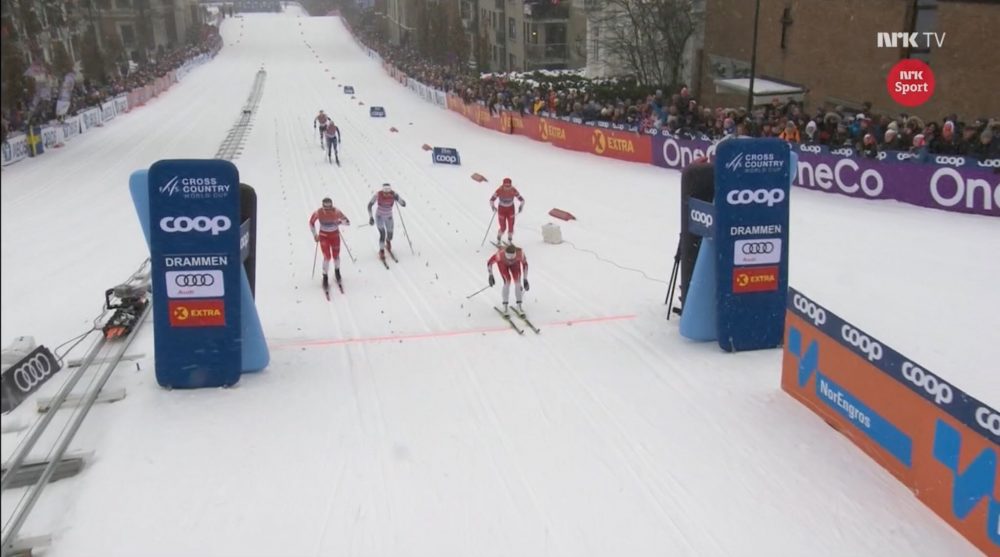 The World Cup entourage gathered Tuesday at the head of the Drammensfjord in Norway. The 1.2-kilometer classic sprint in Drammen, Norway — the post-Holmenkollen sprint stop on the calendar — was held under overcast skies and within a city center jammed with fans.

As we bring the Americans into the story, the benchmark for qualification time was again set by Falla. Sadie Bjornsen of the U.S. Ski Team (USST) was the fastest American qualifier in eighth place. She was 3.32 seconds behind Falla, who completed the course in 2:49.90 minutes. Jessie Diggins (USST) qualified in 18th (+4.65), and Sophie Caldwell (USST) was 20th (+4.99).

With the heats progressing, Diggins moved to the finals after placing second in the fifth heat and winning the second semi-final. Her semi-final lunge at the finish was a blur along with the three other skiers she was synced with across the line. There was a four way photo finish won by Diggins as she advanced to the finals.

“That was really fun today,” Diggins emailed, “I’m so grateful and appreciative of the techs for giving me very competitive skis. Drammen is kind of a funny course, and this year they took away the iconic uphill pitch at the finish, so it was even harder to determine the right moment to transition from double poling to power striding on the gradual uphill! It’s not a secret that I love workable downhills so my strategy each heat was to ski smooth and smart and get myself into an open lane heading into the finishing straight.” 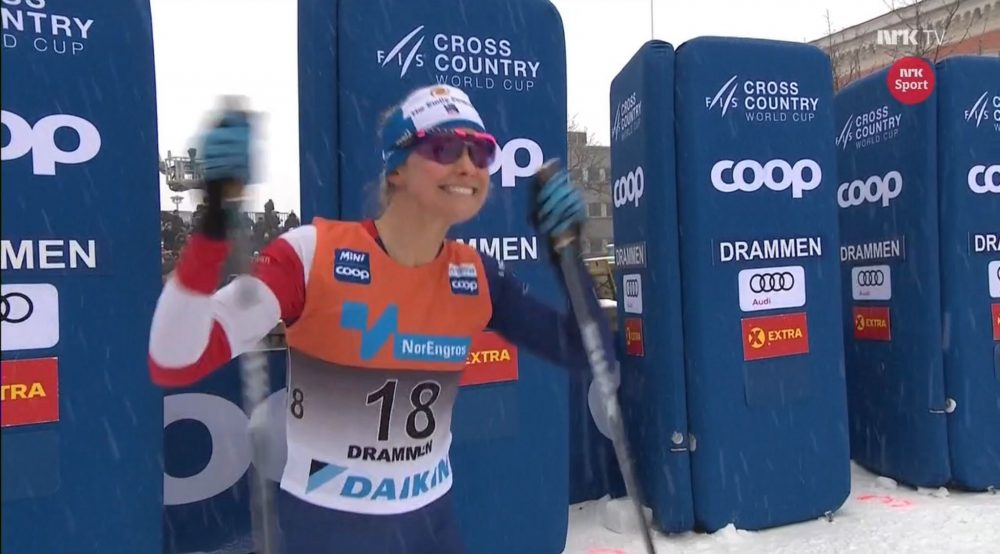 Jessie Diggins of the U.S. Ski Team lining up for the finals in the Drammen , Norway classic sprint. (Photo: NRK screenshot)

The six-across in the start gates for the finals were Diggins, Stina Nilsson of Sweden, Falla, Natalia Nepryaeva of Russia, and Norwegians Astrid Uhrenholdt Jacobsen and Anna Svendsen.

With steady snowfall, Falla set the follow-me-if-you-can pace as the course ascends and then drops in a series of tight and sinuous turns back to the course low point. Falla led throughout. Driving on the ups and leading a four skier line snaking through the downhill. As she descended, Falla kept a small gap on those trying to draft behind which included Nilsson, Jacobsen, and Nepryaeva.

A tight left-hander at the low-point is where Nilsson strategically slotted in and step-turned ahead of Falla, as she took the initial lead on the long incline to the finish. By then, Diggins and Svendsen had fallen off the pace.

Nilsson double poled and then strode on the right, with Jacobsen on her tails. In the adjacent lane to the left, Falla notched into her double pole gear and began moving ahead. Her power maxing out, Falla gained centimeters then a bit of breathing room that became a few meters. Jacobsen, sensing her moment and a Nilsson power lapse, moved to her own lane and surged into second. As Nilsson faded, Nepryaeva kept enough reserves for the end as she barely took Nilsson at the line. 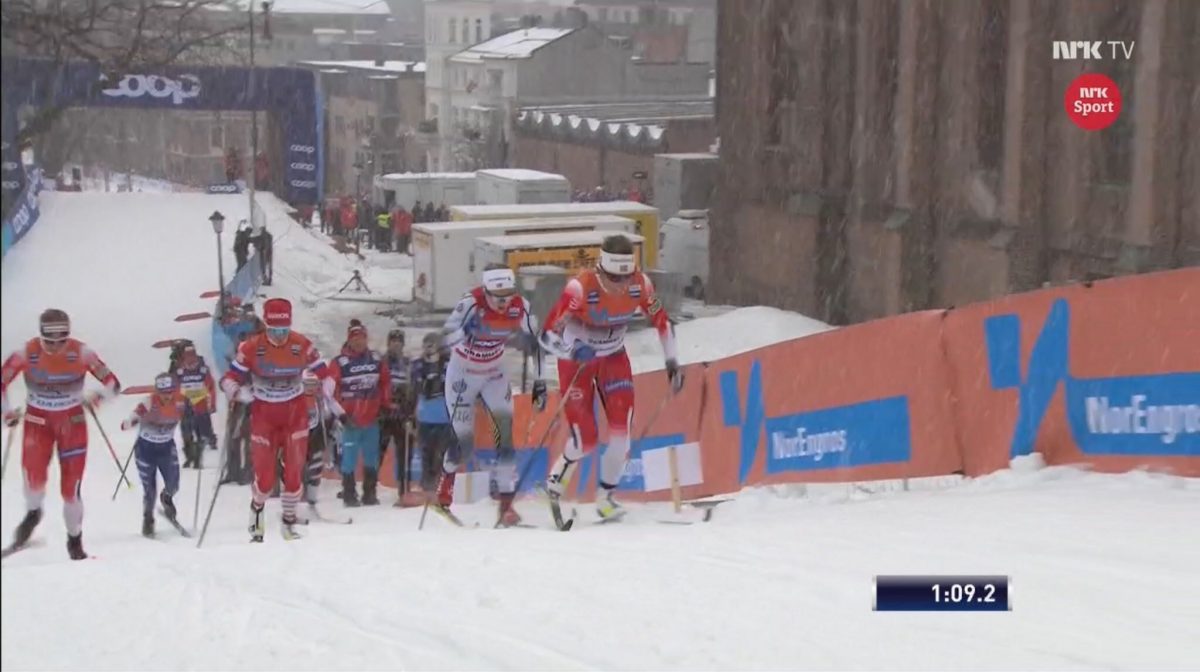 Falla crossed the line in 2:56.12 for the top podium step. Make it five out of six in Drammen for headlines like “Falla Wins!”

“I think my technique is good for the climb before the finish line, my upper body is strong that is why this course fits me so well,” Falla told the International Ski Federation (FIS) after the race. “It is definitely one of the highlights of the season. It is such a great atmosphere. You can really feel the energy and the cross-country spirit. Yah, it is very good.”

It was Jacobsen’s second podium of the season, the other coming in the 10 k freestyle in Ulricehamn, Sweden. She earned Her last World Cup sprint podium in March of 2016, in Canmore, Canada.

For Nepryaeva, it was her second sprint podium this World Cup campaign with ramifications in the overall World Cup standings. Leading the overall is Norway’s Ingvild Flugstad Østberg with 1329 points. She did qualify for the heats but did not advance to the semis, finishing 19th overall. With her third place today, Nepryaeva now sits two points behind Østberg 1327 points with five races remaining.

While racing to a fifth place on Tuesday, Diggins currently sits fifth in the overall World Cup. This was her first race after the conclusion of the World Championships in Seefeld, Austria. Both Diggins and Bjornsen sat out the Holmenkollen 30 k classic on Saturday to recover.

where to buy vancomycin online

where to buy vancomycin online

“In the final I simply got tired from the short turnaround time you get from the second semifinal, but overall I was really happy with the whole day and how I executed my process-oriented goals of efficient and decisive ski testing in the short course opening window, a powerful double pole and ripping downhills, and just having fun and enjoying the atmosphere,” Diggins wrote. “As it turns out, the reminder to actually have fun IS a necessary goal this year with increased pressure, but I’ve decided that if I don’t let outside pressures dictate the joy I feel for the sport and in racing, then I can just relax and enjoy doing what I love best!”

Bjornsen was eliminated in the second heat. Nilsson won the heat in 2:54.37, with Bjornsen placing fifth (+2.69). Bjornsen finished 21st overall.

“Exciting, and frustrating sprint here in Drammen,” Bjornsen explained in an email. “I sat out Holmekollen last weekend in hopes of saving some energy for the final push of the season. My body is feeling good, I just wanted to make sure I didn’t try to do too much and end up sick or tired.”

The course’s uphill finish requires stout double pole capacity. Bjornsen felt that was a positive asset in Drammen.
“I have been feeling really good in double pole this season, which helped me have a good qualifier here to start the day out,” she continued. “Unfortunately, I kind of struggled to find position over the top of the climb, and then really struggled with that super gradual striding in sprint speed right there at the finish. I was trying to push the DP as far as possible because I know that is my strength, but I just couldn’t keep up in that unique striding. That is something I have been ‘re-reminded’ every season I come here, but this time I am writing it down, and getting it done! So many of our courses now are running or DP, so I forget it is a gear I need until I come here to sprint every year. … I was excited to have great skis out there today, and look forward to putting these great feelings to use the next two weekends! I wish we had more classic sprints coming, but we will have to wait until next year now. Off to Falun for a weekend of skating!

Caldwell ended her racing after placing fifth in her heat and 24th overall.

“Drammen has always been a tough nut to crack,” U.S. Ski Team Head Chris Grover wrote in an email. “The finals appearances we’ve had here over the years with Andy, Kikkan, and Jessie have been very special.  Even with diagonal technique control zones, the race remains a double-pole fest.  If an athlete is not one of the best double-polers in the world, they have little hope in Drammen; the race is simply too short, too fast, and too specific in its demands.  The shortening of the course this season, taking out the final steeper classic striding pitch at the finish, placed even more emphasis on double-poling.”

No Canadian women entered the race.