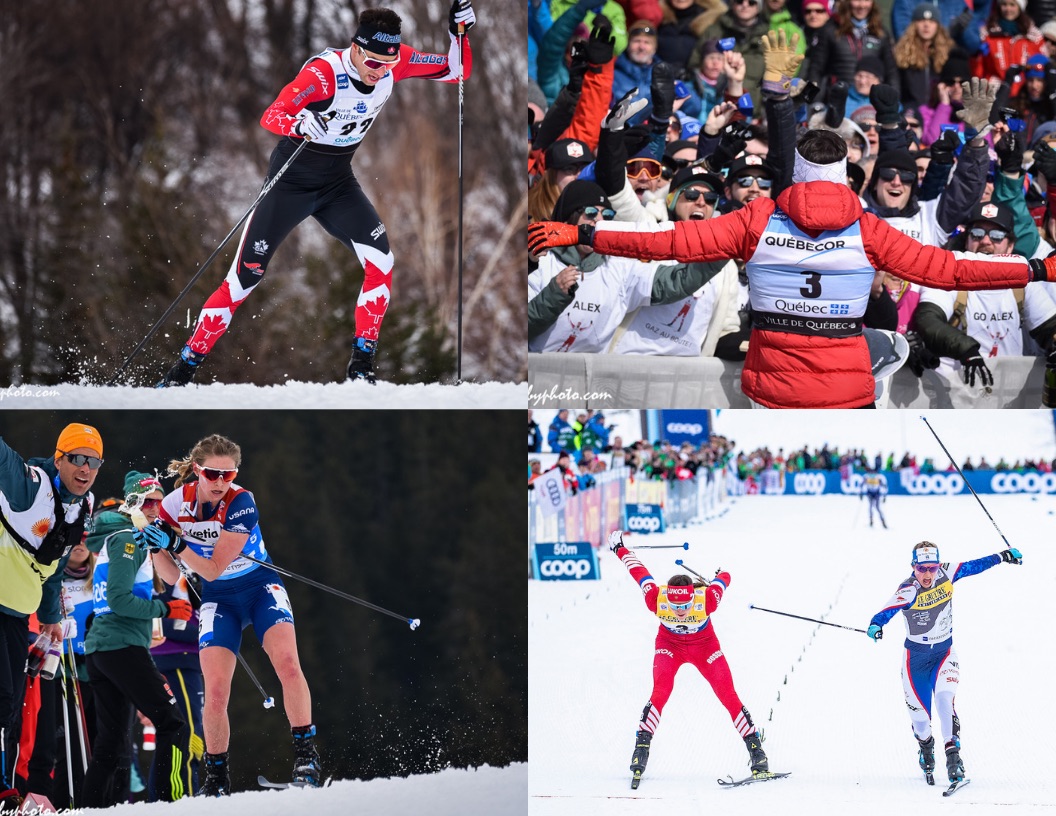 With the 2018/2019 season officially in the rearview, FasterSkier is running a series of articles highlighting some of the players and performances from the season. This honor goes to two outstanding North American skiers of the year.

Thirty years old and finis. Canada’s Alex Harvey has for years been the preeminent male skier from North America. This is not the time to honor his collective achievements, of which there are many, but to recognize his 2018/2019 ski performances.

Harvey skis for podiums. During a year that many might consider a notch below his usual strong stats, he landed third on only the second World Cup weekend in Lillehammer, Norway’s skate sprint. That began a podium drought that lasted until the World Cup’s final weekend in Québec.

Before we get there, sandwiched in between were three top-ten performances including a bare miss in Oslo when Harvey placed fifth, two seconds out of the medals. At the World Championships in Seefeld, Austria, Harvey raced to sixth in the skiathlon and 12th in the 50-kilometer freestyle.

He remained a skier all year to watch, but he struggled to find the mix and match of physical sensations that had often propelled him to the front of the pack with the kick to finish off with a podium call up. He ranked 13th overall on World Cup, 11th in distance, and 26th in the sprint.

With Harvey’s retirement already announced, he came home to Québec’s massive crowds and enough remaining energy to treat all of Canada to one last show. He began the three-race series with a tenth in the skate sprint, followed up with a second in the 15 k classic mass start.

This was not seeing some way out of his prime athlete resurrect themselves, but an example of how emotions and environment can eke out an extra percent of speed from a champion. In the mass start, Harvey defined himself as still world class while making a select group of five in front.

In his final career World Cup race, a 15 k skate pursuit, Harvey and Russia’s Alexander Bolshunov chased down a tactically skiing Johannes Høsflot Klæbo to create a three-skier poker match for the weekend’s overall win. Klæbo did his thing, which was crank over the final bump with an unmatchable hop skate and slide across the line uncontested. Harvey, on the other hand, stuck behind Bolshunov, who has been a foil to the Canadian, until the two opened up their engines in the final 100 meters and came toe to toe across the line.

Harvey took second, Bolshunov third. The younger Bolshunov, at 22, has had a stellar season. On this day, moments after crossing the line, Harvey approached the Russian, flexed his bicep and pointed at it, as if stating he was stronger in the end.

Even with a less stellar finish in Québec, Harvey would have remained the male cross-country skier of the year. Two podiums in Québec make it feel real.

Jessie Diggins came into the season with a map into semi-charted territory. Her World Cup map remains well defined. The steady-drip of media and promotional engagements teasing at her time during her first full season as an Olympic champion was something new to navigate.

“In the 50 days following the Olympics, I packed in 25 events, with more to come in the summer and fall,” Diggins wrote on her blog earlier this month. “I shamelessly pitched the World Cup coming to Minnesota in pretty much every interview, unsolicited, until we gained more traction.”

Let’s face it – Diggins willed the Minneapolis World Cup onto the schedule. It took boundless energy to see that through.

Successful and sought after alpine skiers from the U.S. have dealt with the time-bleed from training and rest for years. The manual on how to build on-snow results while honoring commitments to sponsors and media is dog eared. There are Lindsey Vonn and Mikaela Shiffrin to name two of the most recent alpine athletes to manage notoriety with training and racing. The list of American cross-country athletes who can empathize with Diggins is thin. She does have those who provide advice, but in many ways, her new map has at its edges “Here be dragons”.

As she often states explicitly post-race, Diggins made no excuses and simply did her best.

She earned five World Cup podiums – four third places and a win. One of those third places came in a 10 k skate pursuit in the TdS where she skied the fastest time of day. Her lone win came in Cogne, Italy’s skate sprint.

Diggins is often quick to deflect her individual success to her coach Jason Cork or her teammates or any other person or entity that might have played a positive role. There were, however, other moments when for certain it was all Diggins and her internal drive.

The 10 k mass start classic in Oberstdorf, Germany, the fourth stage in the Tour de Ski (TdS) comes to mind. It was a dicey waxing day. Diggins came into the stage wearing the overall TdS leader’s bib. Right from the go, she struggled to find kick. But she willed herself to an 11th place, losing just over a minute with the effort, and finished the TdS sixth overall.