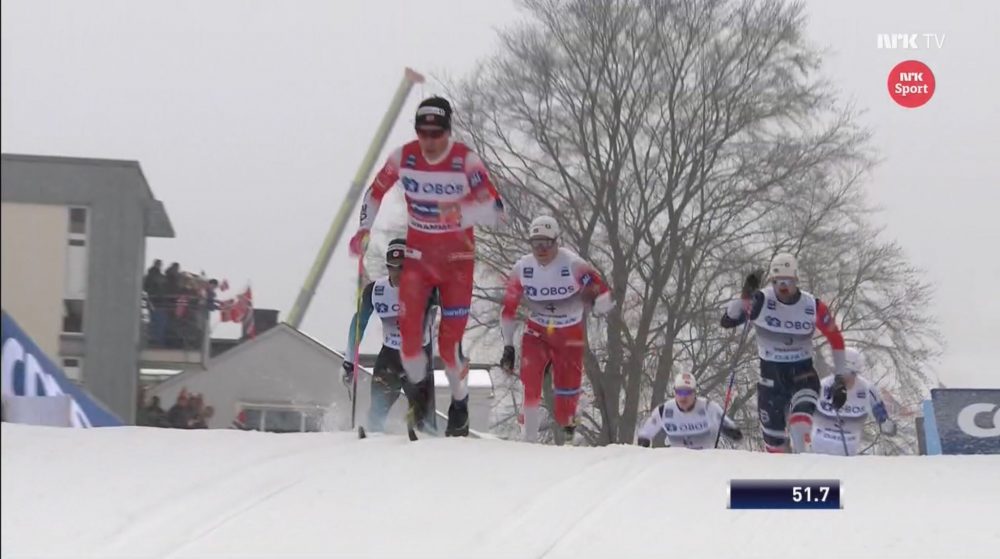 A classic run-stride from Johannes Høsflot Klæbo during the finals of the 2019 Drammen city sprint. (Photo: NRK screenshot)

For the rare athlete the field of play is truly a stage. A place to perform in the moment and seemingly acknowledge the moment as it happens. Johannes Høsflot Klæbo appears to have many of these days. And as he crossed the line in today’s 1.2-kilometer classic sprint in Drammen, Norway, Klæbo may as well have taken a bow. It was again a virtuoso sprint performance.

With thirty skiers making the rounds, and each adding their own dimension to the heats, Klæbo brings a presence that often gives the impression it is a solo show. On Tuesday he won the qualifier in 2:25.60 minutes. To put things in perspective, Russia’s Alexander Bolshunov, the second fastest qualifier, clocked a time of 2:29.14.

A quick glance at the live timing brackets shows Klæbo making a clean sweep. Along with the qualifier, he won the first heat, the first semi, and indeed the final.

It’s easy to get swept up in the Klæbo narrative. But out in the finals with the twenty-two-year-old were Norway’s Eirik Brandsdal, Sondre Turvoll Fossli,and Pål Trøan Aune, Richard Jouve of France, and Sweden’s Oskar Svensson.

The other five skiers followed the lead of Klæbo’s dance in the finals. With an uptick in tempo fifty seconds into the race where Klæbo threw in his trademark run-stride, then a few cycles of double pole, and a quick transition into his run-stride he was off into the downhill with the others unable to catch his draft.

Through the curvy turns, into more downhill, and into the step-around-corner, Klæbo had a breath easy gap on the field heading into the uphill straight. But Klæbo kept the charge on. Able to look back twice at an approaching Brandsdal, Klæbo cruised across the line. Pending any fall on the technical descent, the race for first looked over as soon as he clicked into that untouchable gear way back at the 50 second mark. 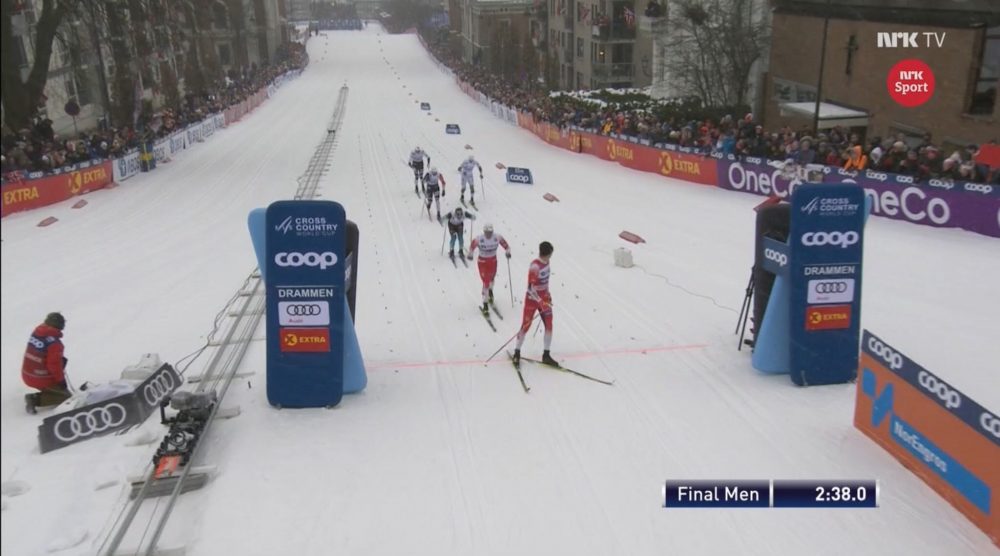 Klæbo leads the sprint globe overall competition by 145 points over Italy’s Federico Pellegrino. His lead in the overall World Cup is a mere 31 points over Bolshunov, who placed 13th in Drammen. With a sizable lead over third place skier Sjur Røthe, who tallies 802 points total in the overall standings (Bolshunov sits with 1250 points, Klæbo 1281), we should see a fight through the final weekend in Quebec to determine the World Cup winner.

For the U.S., Simi Hamilton was the only skier to break into the heats. He qualified in 30th, but bumped to 25th overall after placing fifth in the first quarterfinal heat won by Klæbo.

Three other Americans were entered. Logan Hanneman (APU) finished in 48th, Ben Saxton (SMS T2) 50th, and Kevin Bolger (USST) 51st. With a new crew of sprinters in Drammen, with the exception of Hamilton, U.S. Ski Team Head Coach had a plan in mind for future Drammen appearances.

where to buy albuterol online

“With the exception of Simi, the men’s group needs to gain more experience on this course,” Grover noted in an email. “This was the first Drammen World Cup Sprint for Ben and the second for Logan and Kevin.  All our men need more work on their double-pole to be competitive here double-poling against the best and strongest.”

No Canadians were entered in Tuesday’s race. Racing continues on the World Cup this weekend with a skate sprint on Saturday and an interval start skate 10k/15k on Sunday.