While men’s Nordic Combined has been a fixture in the Winter Olympic games since the first contests were held in Chamonix, France in 1924, its female counterpart has not existed. Women’s cross country skiing was added to the Olympic program in the 1952 games in Oslo, while ski jumping was not added until the Sochi 2014 games.

In November 2016, FIS published its “Nordic Combined Ladies’ Strategy Document” outlining a plan presented by the Nordic Combined Committee. The incremental plan began at the development level, encouraging and supporting girls to become elite level NoCo athletes, then creating the opportunity for international competition on an elite stage. Girls were first able to compete in FIS Youth World Cup events in 2014 and over the subsequent two years, participation increased.

In accordance with the plan, NoCo Ladies participated in the 2019 Junior World Championships in Lahti, Finland – the U.S. entered two athletes, Tess Arnone, and Annika Malacinski, both of Steamboat Springs, CO.

At this year’s spring meeting of the Nordic Combined Committee, a draft of the first ever women’s Nordic Combined FIS World Cup schedule was presented and approved for the 2020/2021 season – a major breakthrough for the sport.

“We are thrilled to present the first draft of a Nordic Combined Women’s World Cup calendar,” race director Lasse Ottesen told FIS. “This is on schedule according to our strategy document and we are looking forward to presenting our women to the world.”

The first competition is slated to be held in December 2020 in Lillehammer, Norway. While the Period II venue(s) remain undecided, the calendar also includes competitions in Otepää, Estonia and Schonach, Germany, as well as the 2021 World Championships in Oberstdorf, Germany at the end of February. 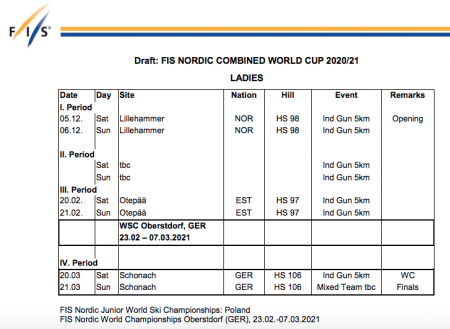 The Nordic Combined Committee also approved the inclusion of a mixed team relay during the World Junior Ski Championships in Oberwiesenthal, Germany.

Women’s Nordic Combined did not receive a bid for inclusion at the 2022 Olympic Games in Beijing, but it is likely that FIS will submit another bid for 2026.

“Nordic combined, and women’s in particular, still need to be developed further in terms of universality [the number of countries with Olympic-level athletes], in terms of the level of the athletes,” IOC sports director Kit McConnell told NBC after the decision was made in July 2018. 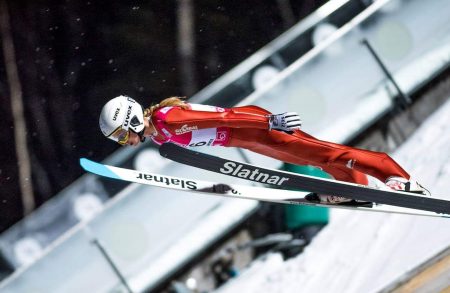