This is the third story following Kris Freeman as he prepped for his first Ironman triathlon. You can read part 1 here, and part two here. 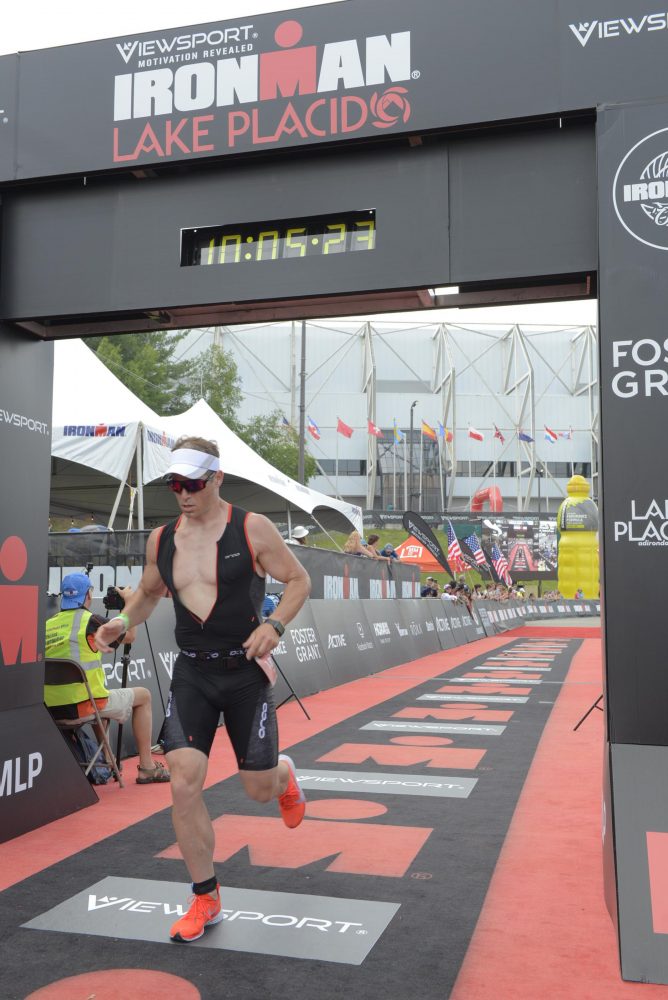 The half is now full. In an often over-corporatized scene blazed with the Ironman logo, thirty-eight-year-old Kris Freeman added a deeply human element as a finisher in the 2019 Lake Placid Ironman. Among the 2042 finishers of the July 28 Lake Placid event, there are 2042 unique stories. The final person across the line was 35 seconds inside 17 hours. The overall winner notched 8:27:57 hours. On each end of the spectrum and in-between, a chasm of suffer-time.

We’ve followed Freeman on his training and race journey this summer not to determine his finish rank, but for the simple reason that as a type 1 Diabetic he remains an endurance athlete lab specimen. He’s constantly testing and refining insulin dosing and feeding strategies for the single purpose of killing it on course. If you know Freeman you know this: he is exacting and buries himself in effort.

His final Ironman prep began on June 23rd after he won a half-Ironman.

“I took a recovery week after the race and then I trained two very large volume weeks following that and then I took an incredible easy week followed by a medium volume leading into the race,” said Freeman. “And I did in that order because I wanted to come into the race with a predictable glucose response. Had I just rested coming in, it gets harder to guess where my blood sugar is going to be.”

As an active type 1 diabetic, Freeman explained that when he is in a fully rested state balancing his insulin and glucose becomes tricky. When he’s more active and “trained”, his body becomes more receptive to both insulin and glucose making it easier for him to determine a detailed dosing strategy. For this reason, Freeman kept up his training volume more than some as he approached the Lake Placid event.

Before we progress, here’s the basic insulin-glucose primer. During exercise, the body needs glucose for energy. Freemen can consume sports drinks and solid food to maintain his blood sugar levels once his stores are depleted. Insulin drives the glucose back into the muscles, decreasing blood sugar values. Freeman uses synthetic insulin as his body no longer produces insulin. He wears a pump to infuse insulin at a predetermined rate and a continuous blood glucose monitor to assess his blood sugar levels.

Freeman has experimented with his insulin dosing in training and racing. During the half-Ironman in June, he programmed his pump for a rate of 1.0 units per hour for the first hour of racing. He then suspended the insulin for much of the bike portion. It reactivated at the start of the run. Although Freeman won the race, he wasn’t satisfied with the dosing strategy.

“I continued to test that idea of suspending the insulin in some long workouts in those two big volumes weeks before Lake Placid,” explained Freeman. “What I was finding was that it was becoming too unpredictable when I turned the insulin pump off and on. I abandoned that theory.”

He opted for an approach that steadily infused insulin for the entire duration of the Ironman, although at a lower rate.

He doubled up on his medical hardware as a backup. Insulin pumps and glucose monitors do fail. The double-up strategy provided an element of safety in the event of mechanical failure. Another added benefit of the double-up, if the insulin dosing was off and he needed to reduce the amount of insulin in his system, “I could always just tear one off and instantly half the insulin dose I was getting without having to use a handheld computer and reprogram a pump.”

What’s outlined above was Freeman’s dosing plan for the full Ironman. 0.6 units/hour for two hours — then a reduction to 0.4 units/hour for the remainder of the race. We’ll learn in a bit how he modified it on the fly, but despite what he claimed was a stressful pre-race routine learning the ins and outs of gear and feed bag placements, Freeman met his first race day objective. He made the goal of a sub-hour swim. The swim took 59:45 minutes. 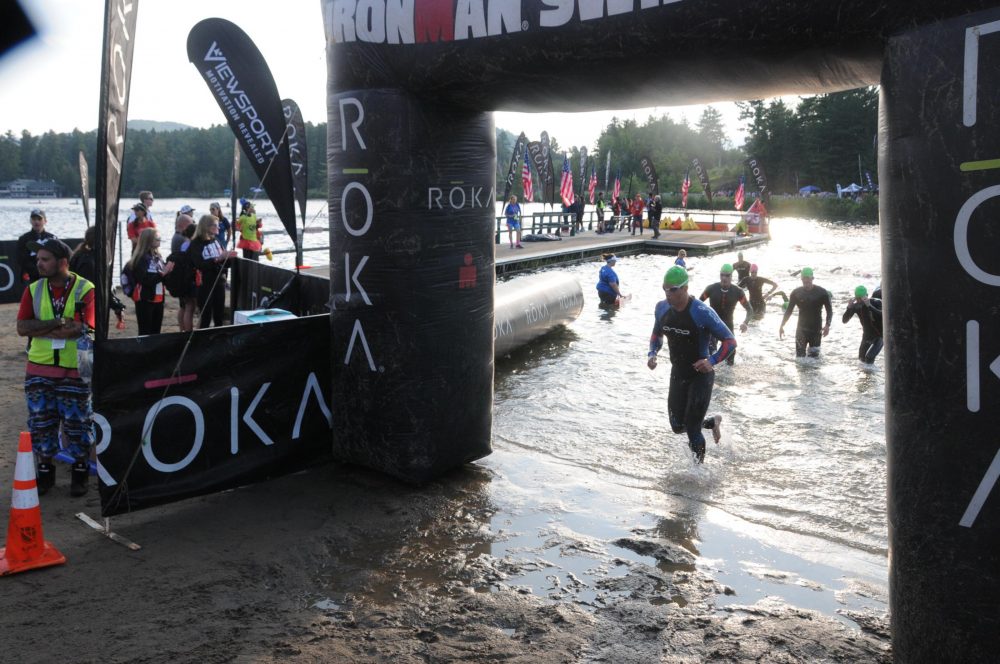 Freeman out of the swim in under an hour during the 2019 Lake Placid Triathlon. (Photo: Courtesy Kris Freeman)

The swim-bike transition, according to Freeman, wasn’t clean. He did swig a planned 16 ounces of sports drink to bolster his blood sugar. But for twenty seconds or so he couldn’t locate his bike. As one of the top athletes out of the water (he was 73rd overall), a volunteer had moved his bike to a position for easier retrieval. That was news for Freeman.

Five minutes and twenty seconds later, the transition over, Freeman was set in his aero bars as he rolled out. Once on the bike, Freeman’s watch and phone connected via Bluetooth for his first blood sugar reading: 137 mg/dl. Pretty much dialed — in the sweet spot of the 100 mg/dl -180 mg/dl range.

“At that point, I emptied another 20 ounces of Gatorade right off the bat which swung the blood sugar so I started climbing into the high 200s for about the next 40 minutes,” said Freeman. “That wasn’t ideal and it also put me in a position where for 40 minutes I wasn’t feeding as I was waiting for my insulin to catch up with the glucose that I gave myself.”

Freeman spent nearly five hours and twelve minutes on the bike. He continued eating solid food when he could and also replenished sugar with fluids. 6:16:52 hours into the race Freeman transitioned to the run. Again, Freeman’s said he bobbled the transition. “Part of it was inexperience and part if it was underestimating the importance of that transition,” he said. 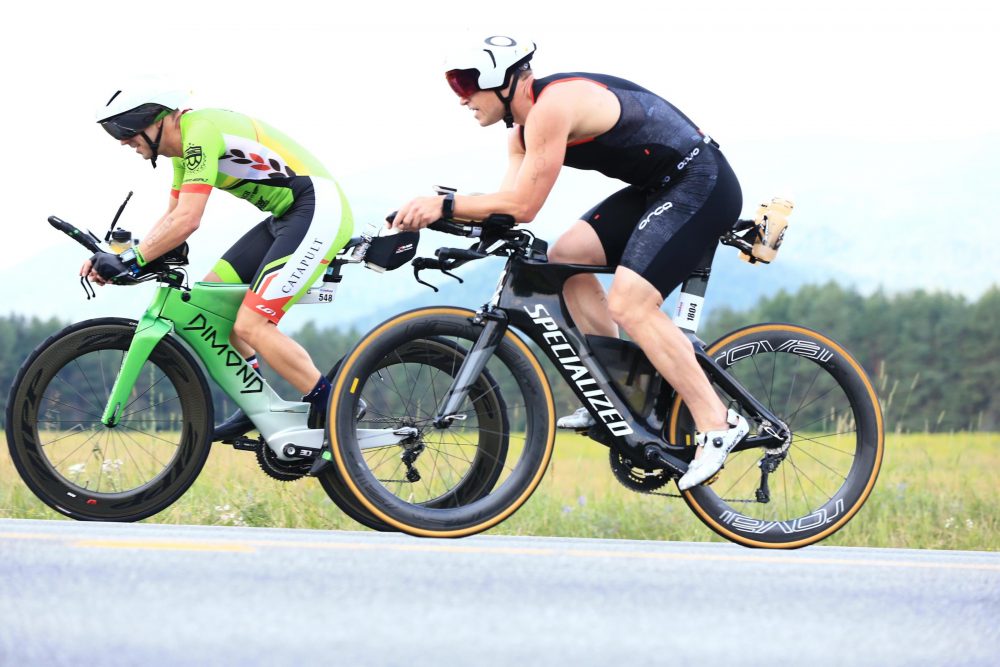 Among other minor time sinks, Freeman chose not to use a bungee-like quick-lace system on his running shoes. With stiff fingers after the bike ride, simply tying his shoes became a struggle.

The first half of the run, to 13 miles, was as expected. He was on pace for a near 3:15 hour marathon.  He followed the usual pattern: he noticed his blood sugar begin to fall, he ingested some form of sugar. The blood sugar levels rise then eventually fall again as his motor burns the fuel and the insulin does its removal work.

“In the run, there were feed zones every mile and a half,” said Freeman. “It was very easy to fuel. They had water, Gatorade, RedBull and cola at every single feed zone. I could get whatever I wanted. And I was doing this for the first half of the race but then I noticed at about 13 miles that I had just fed and my blood sugar was not climbing.”

Back to the dosing strategy and the double-up on medical devices. Freemen knew from experience that his insulin levels were too high. Removing one pump would halve his insulin dosage immediately.

“I tore one pod off at this point,” he said. “Then I noticed that my blood sugar was continuing to drop. Two miles later I tore the other pod off. I made the decision: I have about an hour and a half left in the race and I am not going to get any more insulin.”

“The insulin that was already in my body was enough that it kept driving me low,” said Freeman. “And at this point, I started drinking Gatorade and or RedBull or gels not because I felt like I needed the energy but because I was trying to keep up with what insulin I already dosed myself with. Even though I had torn the pods off I still had the residual tail. I was basically feeding that tail to get to the finish.”

That meant drinking and eating during those last 13 miles when it became a struggle to keep food down. Freeman ran a 3:28:24 marathon for his 9:50:12 finishing time. The top-three in each age group earn an auto-invite to Kona’s Ironman World Champs. He was fourth by 40 seconds. Even with a Kona berth, Freeman did not intend to race in Hawaii this year. This season was about making mistakes and learning to refine his approach in the future.

Analyzing the time losses here and there, Freeman mentioned his haphazard transitions as potential areas to build efficiencies. Then he zeroed in on the potential mistakes with his insulin dosing. It’s worth mentioning again, this was the longest sustained race effort of Freeman’s endurance career. What he came in knowing was that the dosing-feeding quandary for his near ten hour effort remained a moving target.

Although spending the post-race week resting and engaging in some easy active recovery, Freeman was clear he’s gearing up for next year and a shot at Kona. That means positing how he’ll modify his insulin dosing for the next Ironman. Freemen said he needed to remove his insulin pump pods for the following reasons: “Overall glycogen depletion and increased muscular receptiveness to insulin contributed to the downward pressure. I should have deactivated the pumps at the start of the run but hindsight is 20/20.” 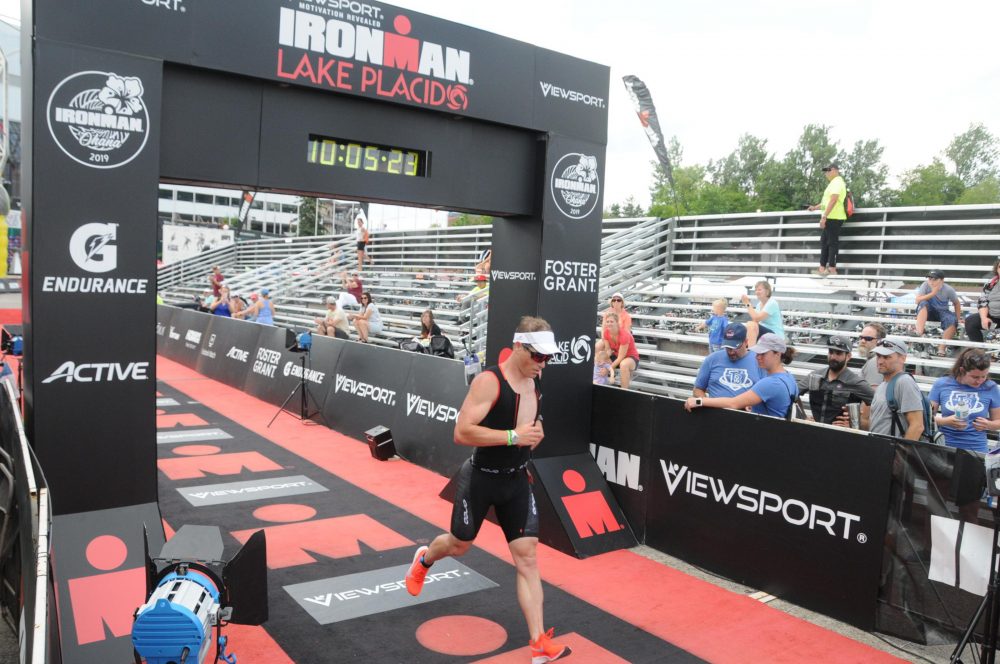 Freeman crosses the line during the 2019 Lake Placid Ironman. He’s already looking for efficiency for his next go around. ((Photo: Courtesy Kris Freeman)

Beyond shutting down his pumps earlier, the redo would involve front-loading his insulin to receive a higher dose earlier in the race.

“I would have the insulin ramp up more for the start of the ride,”said Freeman. “Early in the race is a better time to have to overfeed than later in the race. You are fresher. Your stomach is better. Food is still appetizing. When you get eight or nine hours into the race, you don’t need the energy but you need to keep your blood sugar up because you have that synthetic insulin in your body.”

Freeman was the 10th overall amateur on his maiden Ironman voyage.

“Given everything I learned, I think I said in our last interview that I would be happy with 9:30. Given the difficulty of the transitions and what I learned — 9:50, I will take it.”