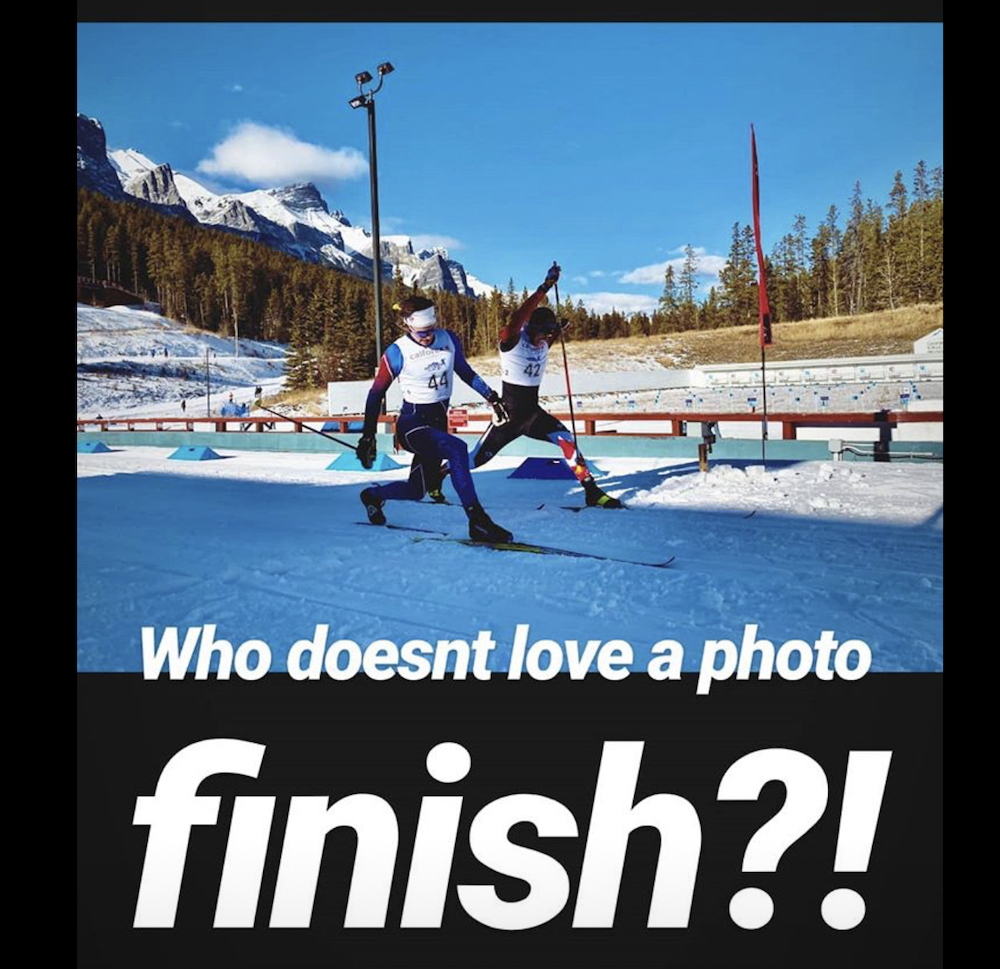 Nordiq Canada hosted the annual kick-off to the race season at Canmore Nordic Centre on November 13th. The ‘Nordiq Thunder’ races are an opportunity to put on a bib and test fitness and are not being used for trip selection this year. The full press release follows the two winner’s interviews, below. Results for both days are on zone4.ca

CANMORE, Alta.—Antoine Briand and Maya MacIsaac-Jones were crowned the king and queen of the annual Nordiq Thunder King’s Court Sprints on Wednesday in Canmore, Alta.

Born just two days apart, the 24-year-olds hammered the pace up and down hills on the challenging 1.4-kilometre track throughout the qualifying round, and in each of the three head-to-head heats, under a blue-sky morning at the Canmore Nordic Centre.

The unique King’s Court race is a no knockout format that gives athletes opportunities to race – handling category sizes of nine-to-24 racers in three rounds, with up to four athletes per heat. The goal of the format is to have athletes compete against a variety of similarly skilled racers, men and women mixed in each heat, that benefits skill development. By the final round, the fastest athletes are generally competing in the all men and all women’s final, with the slower athletes in the lower finals.

That certainly held true on Wednesday for both men’s and women’s brackets.

Racing on skate skis for the qualifying round and in the final, Briand of Sept-Iles, Que., was the fastest qualifier leading the men into the senior head-to-head heats. After struggling to find his top gear in the first round, Briand put the pedal down in the second and final heat where he edged out Olympian and three-time World Cup medallist, Andrew Newell of the United States, for top spot on the podium. Bob Thompson, of Thunder Bay, Ont., placed third.

“In some ways this means nothing and, in some ways, it means everything. I am happy to win today,” said Briand. “It was an interesting battle. I played it wise going fast on the flats and the downhill. I wanted to do good and win today. It was important for my confidence to get this one.”

A motivated Maya MacIsaac-Jones was determined to kick her season off with a strong start. Qualifying in second spot, the Athabasca, Alta. resident put her summer training to the test with a hard-fought battle through the women’s heats where she went head-to-head with National Ski Team member, Dahria Beatty of Whitehorse, in the final two rounds.

While Beatty led the Canadian duo into the finishing stretch in the second round, it was MacIsaac-Jones who double-poled relentlessly to make up the ground and edge the Olympian at the line.

“That format is so great in terms of getting ready for the race season and having a good tune-up,” said MacIsaac-Jones. “I think it is one of the best formats for sprinting out there. You have to go as hard as you can in every heat, and you aren’t saving anything for the final. It is perfect.”

A rematch was set for the senior women’s final.

Beatty and MacIsaac-Jones were quick off the start line, darting up the steep climb out of the stadium. Playing chase around the rolling terrain, it was the determined MacIsaac-Jones taking the lead this time on the final downhill, and she never looked back, securing her spot on the golden step of the senior women’s podium.

“I had a lot of fire in me this training season. It definitely is what is keeping me in this racing season. Things have been feeling really good overall this year. Today is another check mark on everything that I’ve been doing in training is working so far.”

Nordiq Canada is holding its annual season-opening race series for the majority of the nation’s male and female cross-country skiers, thanks to the Canmore Nordic Centre’s annual snow preservation project, Frozen Thunder.

In an effort to provide Canada’s Nordic athletes with the ability to train on snow at home in October and early November, the Frozen Thunder initiative stored enough snow under a thick layer of sawdust to insulate it over the summer months, allowing them to cover the 1.4-kilometre of trail.

Modeled after snow preservation projects in Europe, the Canmore Nordic Centre was the first to take on the project in North America – and is subsequently the first to open its trails on the continent each year – providing another critical resource for Canada’s high-performance Nordic sports.

Nordiq Canada is the governing body of para-nordic and cross-country skiing in Canada, which is the nation’s optimal sport and recreational activity with more than one million Canadians participating annually. Its 60,000 members include athletes, coaches, officials and skiers of all ages and abilities. With the support of its valued corporate partners – Haywood Securities Inc., AltaGas, Swix and Lanctôt Sports– along with the Government of Canada, Canadian Olympic Committee, Canadian Paralympic Committee, Own the Podium and B2Ten, Nordiq Canada develops Olympic, Paralympic and world champions. For more information on Nordiq Canada, please visit us at www.nordiqcanada.ca.