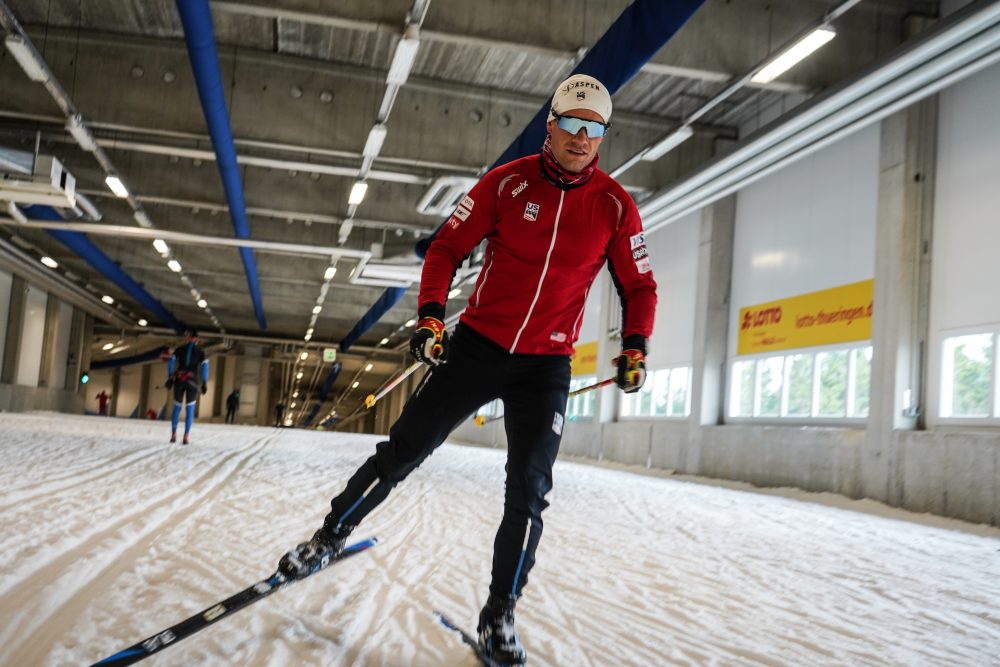 By the time you read this piece, some skiers from the U.S. Ski Team (USST) will be settling in Trondheim, Norway for a two and a half week training camp. In total, five are making the journey from the U.S. The sixth skier, Kevin Bolger, no stranger to training in the region, has been in Trondheim for nearly a month. Bolger’s experience in Trondheim goes deep. He has trained there in the off season for many years. 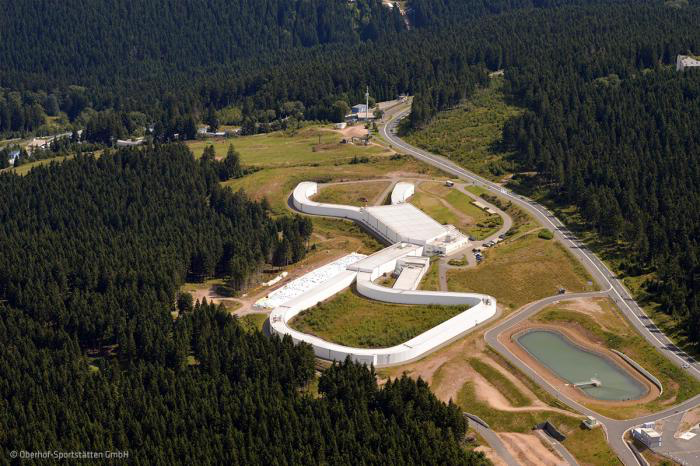 “In terms of having a guide upon arrival, we are pretty well plugged in.” U.S. coach Matt Whitcomb said in a call.

Hamilton and Whitcomb will hop a flight from Germany to Trondheim. The pair spent four days last week in the Oberhof ski tunnel. If you are imagining a simple oval where Hamilton becomes dizzy going round and round, the tunnel is a bit more complex. Whitcomb relayed that Hamilton describes the tunnel as “a loop with two out and backs, like a commemorative ribbon”.

The indoor-skiing provides Hamilton an opportunity for on-snow training and to become accustomed to his new ski fleet. After a career spent on Fischer skis, Hamilton has switched to Salomon skis and boots this season. 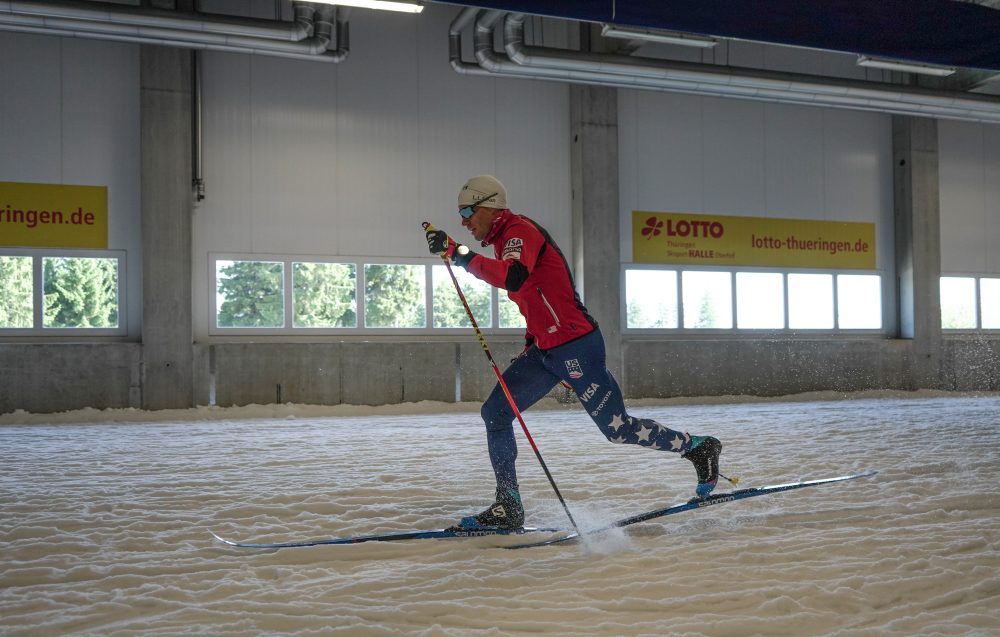 “It was a good opportunity with Salomon this year because we have Jessie [Diggins] and Sophie [Caldwell] on them among the various brands in our truck,” Whitcomb said. “And we have an exceptional amount of service because they have few athletes on the World Cup. It was time for a change for Simi and this time around in Oberhof it is more about getting used to the product instead of actually testing the skis. We will do a little bit of testing but the main purpose is simply to get used to skiing on the new brand.”

The Oberhof ski tunnel was reserved by several elite groups twice each day for four days.

“Our goal is to not really push it too hard it is just to get in as much quality skiing as we can under the expected jet lag to go to Norway both well trained but also not buried,” said Whitcomb.

The camp in and around Trondheim will involve joint training sessions between the U.S. contingent and skiers from Italy’s National Team. Federico Pellegrino, Francesco De Fabiani, and Dietmar Nöckler are scheduled to attend. In addition to training with the Italians, the six U.S. skiers will race the Toppidrettsveka rollerski events from August 22-24.

“The number one goal is to get some race experience in the summer against some of our World Cup competitors and just get that summertime competitive vibe going that you cannot get in the U.S. without going to the best,” said Whitcomb. “That is the number one goal. And the secondary goal is to a little bit of training with some of the local Norwegians in Trondheim. Some that are showing up early for the races and also with the Italians who we have been talking with for the last four or five months about wanting to do something together 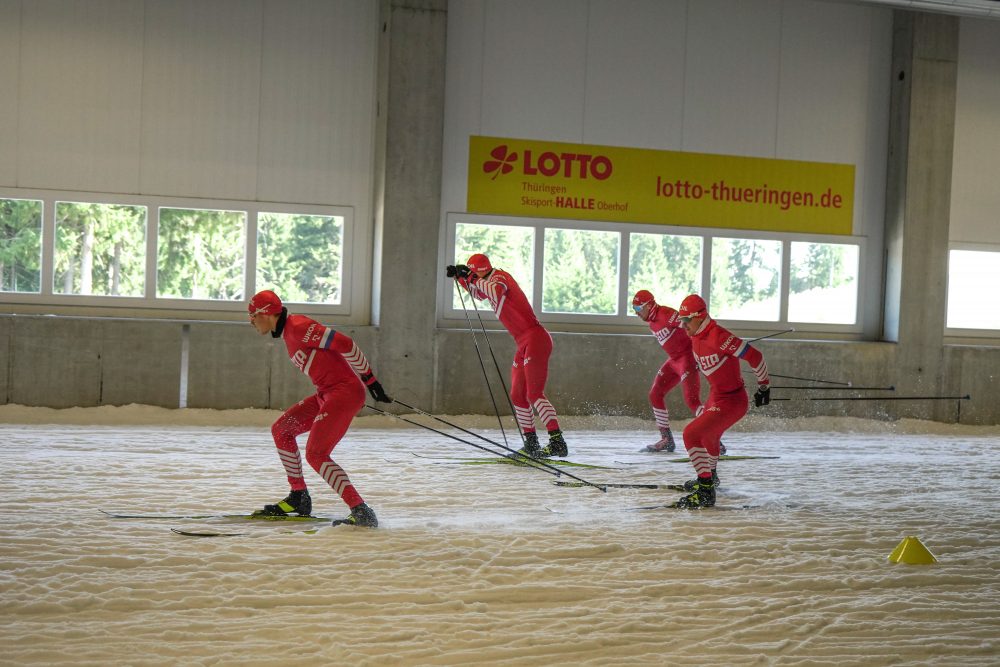 Hamilton was not alone in Oberhof. The Russians were there to join the ski tunnel fun. (Photo: Matt Whitcomb)

In years past, the U.S. team has flown to New Zealand for a major on-snow camp. This year with no World Championships and the Olympics three winters away, the coaches offered athletes the possibility of a new routine. Jessie Diggins, Julia Kern, and coach Jason Cork will return to New Zealand’s Snow Farm.

“The number one reason is just for some change,” said Whitcomb of the smaller contingent headed to New Zealand. “It wasn’t anything that we believe so firmly in that we were opposed when Julia and Jessie wanted to go, it was no big deal. It was more of a let’s bring this to the athletes and see what they want to do. As you might imagine, it is quite a big time commitment for some of us who don’t get to see a lot of summer, or one of the best parts of the summer, and it’s exchanging that for winter. You are giving up a bit there. It is something will miss as Simi and I were both just talking about because it is a reprieve from the heat of August. It is just for the purpose of changing things up a little bit and it is a non-championship year. Later on, we can perhaps assess whether or not it provides us with what we think it does.”