International Cross-Country Performance of the Year 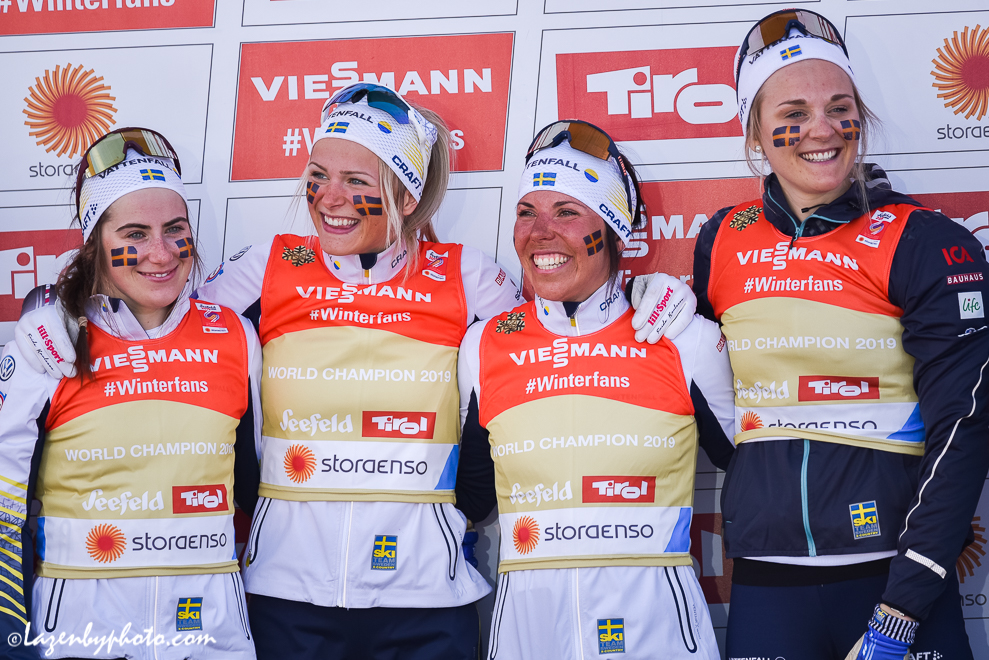 With the 2018/2019 season officially in the rearview, FasterSkier is running a series of articles highlighting some of the players and performances from the season. This honor goes to the most outstanding international cross-country performance.

Zeroing in on a single cross-country performance of the year can be futile. Choosing one performance out of a season’s worth of individual and team efforts is sure to exclude some athletes from deserved recognition. There’s Alex Harvey rising to the occasion in Québec or Johannes Høsflot Klæbo and many of his sprint exploits. Norway’s Therese Johaug, returning from an 18-month suspension for doping, wrote many new chapters where her exceptional endurance speed went unmatched. Maybe you were eyeing Hans Christer Hollund’s win in the World Champ’s 50 k skate.

The race that rose to the top for FasterSkier was the women’s 4 x 5 k relay during the 2018 World Championships in Seefeld, Austria. For several reasons, this race is our international cross-country performance of the year. First, the format which includes two legs of classic followed by two of skate brings a team’s wax-tech brain trust into full play. Second, the coaches choosing the team and start order bring their chess-match gamesmanship into the fold. Third, Seefeld’s atmosphere was the biggest stage of the year.

Then, of course, there was stellar racing. 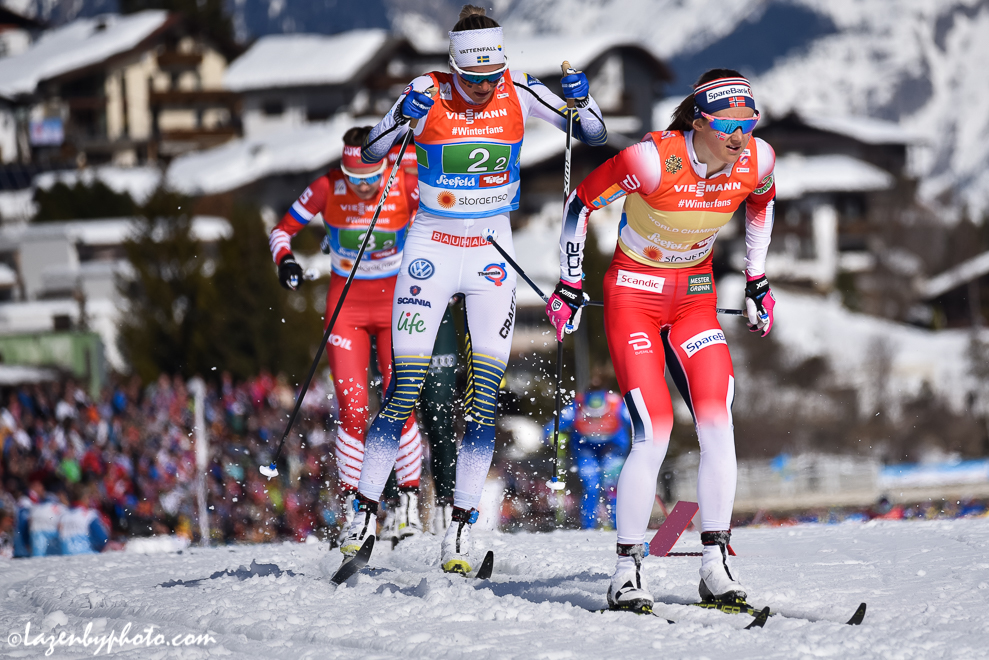 Ebba Andersson, Frida Karlsson, Charlotte Kalla and Stina Nilsson of Sweden along with their rivals from Norway, Heidi Weng, Ingvild Flugstad Østberg, Astrid Uhrenholdt Jacobsen and Johaug were each a part of their respective symphonies.

In nordic sport, the podium reserves enough room for a single winner. And that went to team Sweden which won the relay in 55:21.0 minutes over second place Norway (+3.1).

Two U-23 skiers raced the classic portion for Sweden. Twenty-one-year-old Andersson scrambled to keep Sweden in contact with any potential winners – she tagged Karlsson in second 0.2 seconds behind a then leading Russia. Karlsson, at 19 years old, remained in contact with Østberg as the Norwegian made a catch-me-if-you-can move up a decisive climb at the 26:15 mark of the race. Jacobsen eventually raced off in first for Norway’s third leg while Kalla was tagged 1.8 seconds back. 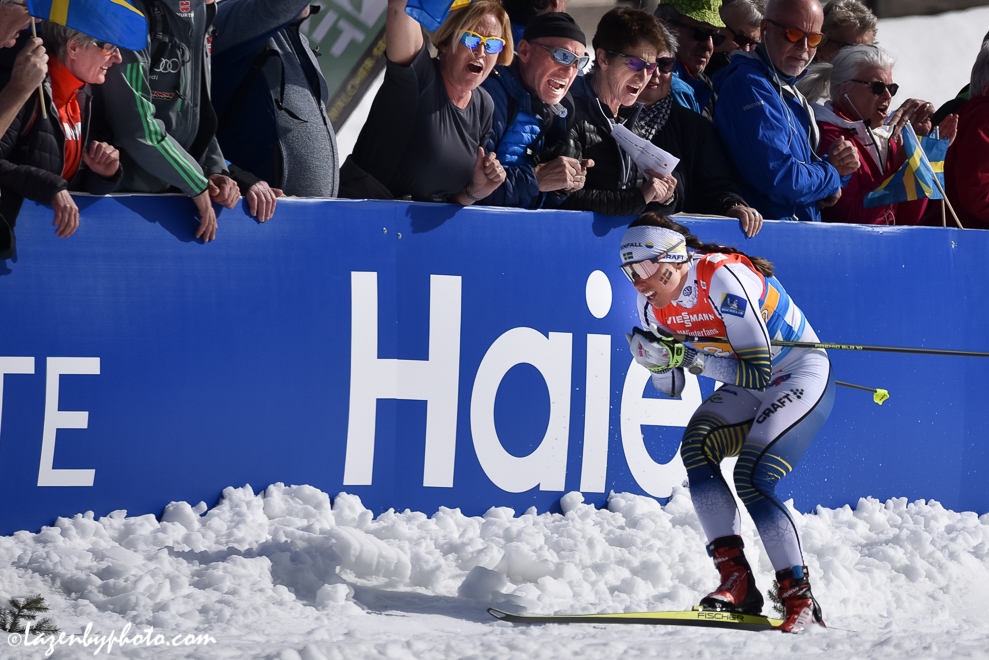 Sweden’s Charlotte Kalla is clutch. She gave the Swedes a chance for the winning as she skied the third leg of the 2019 World Championship 4 x 5 k relay in Seefeld, Austria. (Photo: John Lazenby/lazenbyphoto.com)

Kalla remains clutch. She earned legendary status when she reeled in a gold medal for Sweden at the 2014 Sochi Olympic Games in the 4 x 5 k relay.

As the third leg skier in Seefeld, Sweden had in Kalla an athlete who could overpower and separate herself from any rival. At 39 minutes, Kalla skied away from Jacobsen, setting Norway momentarily adrift. Kalla gifted Nilsson a wide-open lead: it was a gap of 18.8 seconds as Jacobsen tagged Johaug for Norway’s Hail Mary.

Johaug skied her leg in an elapsed time of 12:52.2. Nilsson paced herself to a 13:07.9 fourth leg split. The math comes out to this: Johaug made up 15.7 seconds on Nilsson. She could not cover the full deficit by the finish.

Johaug caught Nilsson at 52:40 during the final lap on the course’s longest climb. 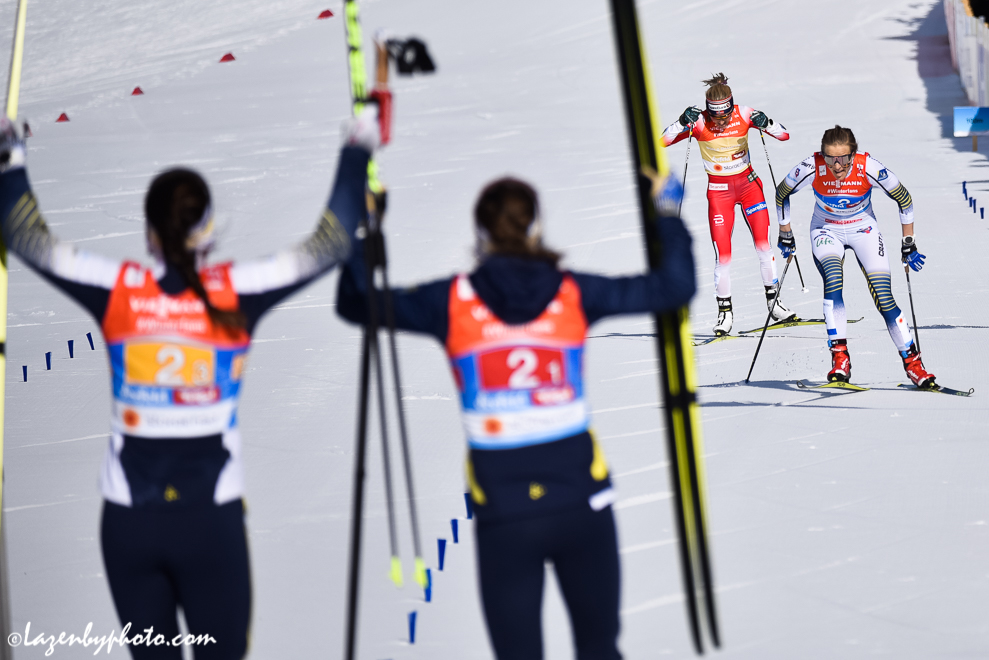 Nilsson, the crystal globe sprint winner, is not simply a sprinter by day. She remains a massive distance talent when the occasion arises. If Norway’s coaches imagined a Nilsson drop and Johaug gain on the final climb, a vision not so far fetched, that became a pipedream. Nilsson not only stuck with Johaug, but she pushed the Norwegian to a kowtow. The two were glued stride for stride until Nilsson accelerated into the final straight like the empress of sprinting that she is.

Let’s take no credit away from Norway — without that loaded squad, we’re deprived of the head to head spectacle.

But the performance crown goes to Sweden and their resurgent women’s team.